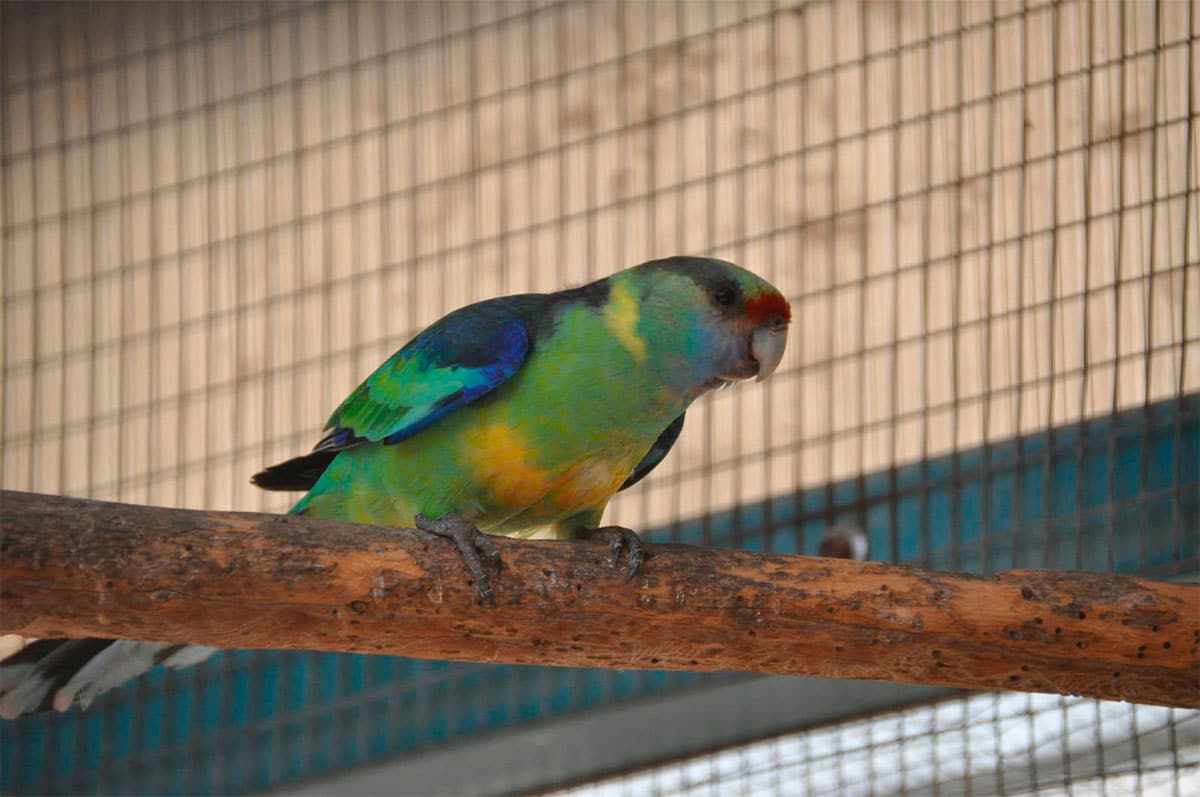 The Mallee Ringneck (Barnardius barnardi) has the plumage predominantly Green, crown and sides of the head bright green, with the cheeks slightly tinged blue and a small red band across the forecrown. The neck It is olive brown with a yellow ring around its back.

The lower area of the back is dark blue. The chest and the abdomen are turquoise blue, separated one from the other by a transverse band of yellow color which is more or less wide. The curvature of the wing It shows a greenish blue that overflows on the mantle.

The greater coverts are yellowish-green. The secondaries They are pale blue, In contrast with the covered and primaries which they are dark blue.

The underparts is blue. The upperparts tail is dark green, their central feathers blue tines and outer blue with pale tips.

The bill is whitish grey. The strait bare periophthalmic is solid gray. The irises is of color Brown dark and the legs grey.

The female It has colors more muted than your partner. The back and the lumbar area show a dark greenish gray. The underside is grey, with a more or less visible clear band.

The immature with even more muted than females colors. They have the neck and back of the crown brown. The cheeks blues are often more developed. The back and tail are greyish green. The band underwing usually visible.

Two species in the genus were traditionally recognized Barnardius, Barnardius zonarius and Barnardius barnardi, but both hibridaban in the contact area and are currently considered a single species.

The Parakeets Barnard They are mainly sedentary, but there may be some moves to small scale in response to climate change.

The species occupies the arid areas of mallee composed almost exclusively of Eucalyptus gracilis. Also found in shrubs of Acacia and Cypress and in a wide variety of very similar habitats.

The species living in the areas of the North has a clear preference for the rubber Red (Eucalyptus camaldulensis) It covers temporary streams and shows a more arboreal lifestyle.

Generally less common in populated areas and the wetter regions. Large flocks are more rare to observe; pairs or small groups are the usual social units.

Less bold and curious that the Australian Ringneck, Although the two species share habits, diet and cortejo similar.

During courtship, the male shrugs, causing the wings to vibrate slightly.
Like most other species of parrots, the Mallee Ringneck they have as a practice gnaw and chew wood, whether to put his personal stamp on his favorite tree, or to enlarge the cavity entrance. This activity allows them to keep their beaks in good condition.

The nest is usually in a hollow tree, and usually four to five eggs make up the implementation, deposited on a base of wood decaying waste.

In the North, the breeding season tends to be governed by climate, and nesting coincides with the end of the wet season planting.

In the South, playback starts in July or August and the season can be extended until January with a second litter. Incubation lasts around 20 days and is carried out by the female.

The young birds leave the nest after 5 weeks, but remain in the household with his parents for a while.

The Mallee Ringneck they are mainly vegetarians, they feed on seeds – Melon seeds (Cucumis myriocarpus), bitter melons (Citrullus lanatus), fruits of the tree of the tobacco (introduced), fruits, nectar and flowers. Its menu is complemented by insects and larvae.

The Mallee Ringneck they are distributed through the interior of the East Australia, to the West of the Great dividing range, with a practically isolated population in the Northwest of Queensland, stretching across the border of the Northern Territory, along the Nicholson River, in the North, and reaching Glenormiston, and western part of Queensland, in the South; its eastern limit is around Kynuna.

The the Northern subspecies meets the nominal species in the region of Range Forsythe, and extends to the South, with its eastern running border near Barcaldine, Mitchell and Goondiwindi, and in New South Wales.

To the South extends East through Moree, Dubbo and Wagga Wagga to get up to Kerang in Victoria.

In the West, the species is dispersed through of Western Queensland to the region of Cooper Creek of South Australia around Innamincka.

In New South Wales, is located to the West of the basin of the Darling river, about Broken Hill.

Distributes lengthwise of the Murray River, and in Victoria It extends through the Northwest corner to the South, until around Edenhope.

In the southeast of South Australia ranges through Naracoorte and Mount Lofty Ranges in Port Augusta and Montes Flinders, where is integrated with the Australian Ringneck; the two species are also more North.

Getaways birds have been registered in Brisbane, Melbourne and Sydney.

The species is considered common throughout its range.

The world population is estimated at around 500 000 individuals and it seems stable.

However, seems less able to adapt to the changes that have occurred in the habitat that the Australian Ringneck.

The Mallee Ringneck It is appreciated as a pet, but the birds in captivity are relatively few.

More common in Europe and Australia; not so much in the United Kingdom or United States.

It is initially a shy and nervous bird, Although soon it acclimatizes caregiver. Bonding with a partner to do when both birds are young, adults don't usually live in harmony. Aggressive with other parrots.