The Three bands Armadillo It has one of the most efficient defenses against their enemies. It is single armadillo able to coil into a near perfect ball feel threatened, the most vulnerable parts of your body can hide between their shields, as your ears, legs and tails. It has three mobile bands in the shell.

They are in some parts of the North of Argentina , Southwest Brazil , Paraguay and Bolivia , at elevations from sea level to the 770 m.

Usually it does not manufacture their own burrows, but to use the abandoned of Anteaters. Their main food is termites and ants, as well as worms, beetles and spiders, which capture using their claws, in their nests, under the bark of trees and on the ground.

Breeding, usually a single, born with eyes closed, even that can walk and screwed. The mother carries breeding taking it gently with the mouth of one of the edges of the shell or an arm. It is known that they can live up to 11 years.

In captivity, armadillos can eat foods such as fruits and vegetables. 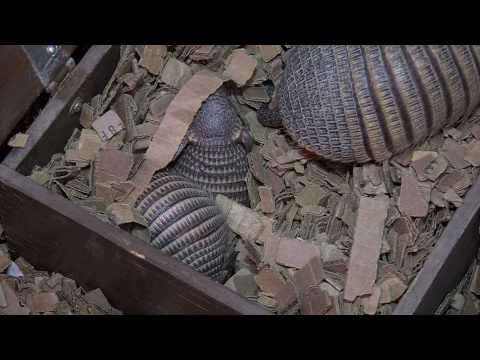