The tenrec are family of mammals and are found in Madagascar and parts of Africa. They resemble hedgehogs, shrews, weasels, mice and even, otters, as a result of convergent evolution.

The smallest species are the size of the shrews, with a body length of around of 4,5 centimeters and a weight of only 5 g., While the largest, the common or tenrec tailless, is of 25 to 39 cm in length, and you can weigh more than one kilogram. While they may resemble shrews, sea urchins, or otters, they are not closely related to any of these groups, their closest relatives are other African insectivorous mammals such as moles of gold and elephant-shrews.

Most of the species they are nocturnal and they have vision problems. Their other senses, However, they are well developed, they have especially sensitive whiskers. As with many of its other functions, the dental provision of the tenrecs varies greatly between species, they may have of 32 to 42 teeth in total. Unusual for mammals, the permanent dentition in the tenrecs is unlikely to erupt fully until long after that his adult body size has been reached. This is one of the common anatomical features to, hyraxes, sengis and Golden moles (but apparently not the aardvarks), in keeping with his descent from a common ancestor.

The Tenrecs have a gestation period of 50 to 64 days, and they give birth to an offspring series relatively little developed. While Otter shrews have only two offspring per litter, the tenrec can have up to 32 pups, and females possess up to 29 teats, more than any other mammal. The tenrecs are social, they live in multigenerational family groups with more than one dozen of individuals.

A team from the BBC has managed to shoot at a the lowlands list tenrec, genus Hemicentetes. To rub each other some special tines that has back, produces calls of ultrasound, very high tone that connects him with his companions when they are in the darkness of the understory. The technique is known as stridulation - produce sound by friction of certain parts of the body. 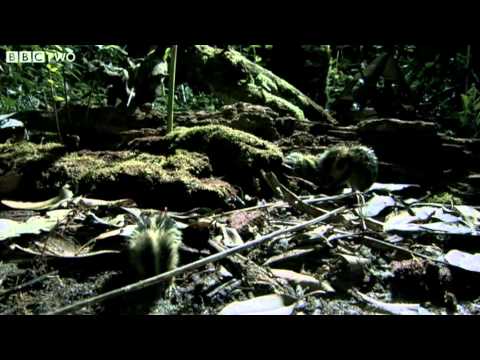 In the island of Mauritius , some of its inhabitants eat meat of tenrec, Although it is difficult to obtain (that is not sold in shops or markets) and difficult to prepare properly.

It is becoming increasingly popular in the pet market, and in the future can serve as an important model to an agency of biomedicine, Since it is related to mice, rats, Guinea-pigs and macaques rhesus which comprise the most common animals in research.