Walking seemed an impossible task when this little dog was born without her two front paws.
But thanks to its proprietary Dian Dian, he overcame his disability and learned to walk.
The small dog now spends his days jogging around the city due to the perseverance of its owner.

CEN Lan who lives in Nanning, capital of Guangxi, to the South of China, It adopted the then puppy six years ago.

The mascot of a neighbor gave birth to six puppies, and one of them was surprisingly born without front paws.
“He was one of the six puppies of the litter in which the healthy five were adopted, leaving it alone,” explained.
“I could read in his eyes that it was disappointed and was eager to walk.”
“Then I took it without hesitation.” The history of football is filled with small stories, some of them close to the incredible. Today marks the 47 years of theft who put in check the world of 1966 and he had a dog named Pickles as hero. A normal dog of one ordinary citizen. If Hurst gave England the World Cup with his goals, Pickles made possible that Bobby Moore lifted the Jules Rimet to heaven in London at the old Wembley.

It was March of the 66, four months to start the World Cup, and the World Cup was on tour in England so that everyone could see it. The 20 of March was at Westminster Central Hall and the unimaginable occurred: an oversight of the guards and the theft of the Cup, taking advantage of the thief or thieves the back door. Alarms jumped and Scotland Yard put hands to work.

Read moreToday marks the 47 years of theft who put in check the world of 1966 and he had a dog named Pickles as hero. The animal heat was sufficient to keep the girl alive and was the main factor for survival, He said one of the firefighters who rescued the child. The girl was a lost night.

A three-year-old Polish girl, that was lost from his home on Friday in Poland,he survived sub-zero temperatures to spend the night hugging your dog, According to published the G1 news portal.

Firefighters found the girl - named Julia- the morning of Saturday along with its mascot Czarek, in a swamp to several kilometers from his home in the village of Pierzwin.

According to the fireman, Grzegorz Szymanski, the animal heat was sufficient to keep the girl alive and was the main factor for survival. However, Anyway the child was taken to a hospital where recovers from the effects of exposure to the cold night of at least - 5 ° C.

Search for Julia mobilized more of 200 people in the early hours of Saturday. The parents of the girl said that she played with the black dogs in the garden of the House when he disappeared.

According to the family of Julia, She and the dog were inseparable.

Lost is a Burgos Perdiguera of 6 years of age who has been rescued from the Faculty of veterinary of León, which had been "abandoned" by its owner (a professor at the same Faculty) in the cages of the University, of which were lost to radiology to perform in it. He was also in the hands of a student who used to write a thesis and then returned it to leave there.

Lost has very good character, is a little scary, but as it takes a little confidence shows how loving is and the desire to find a permanent family who wants to.

It is very urgent to find her lost home, and it is time to receive the life that he deserves.

Please contact me through Facebook by private or email ( [email protected] ).If you can not be your future home, Please, spread. Thank you very much in advance. Two former L ’ Oceanogràfic of Valencia have moved to the NGO SOS dolphins cases of “slackness” and “bad practices” in some animals, What has brought them to “sick” or, even, “to the death”, warned in a statement this entity –It brings together different associations–.

Against this version, from the city of Arts and Sciences (CACSA), the complex where L ’ Oceanografic, they have denied any kind of abuse to animals and they have secured, speaking to Europa Press, the Center's facilities meet “all” quality requirements. They have also pointed out that they will not enter “in this type of controversy”.

These two past the Park put in knowledge these facts to SOS dolphins separately, at different times, as reported from the entity to Europa Press, but they have pointed out that by now they discard move this situation to the Civil Guard or the courts.

Since that had knowledge of these facts, the entity has reported that he has directed both the direction of the Park and the Generalitat valenciana for reporting on some of these problems of welfare, and it has received answers “unsatisfactory” by the Administration.

These two former have denounced, among others, the case of a male walrus that, due to the stress that resulted in limited access to sunlight, “He died by the long intake of stones”. They also warned that a dolphin died “by eating the painting of the walls of the swimming pool”.

Another of the “problems”, He added the entity, is that there is a “excess” of animals for the size of the “small” pool. As an example, It has been suggested that the water of the sea lions “It is often cloudy and with large amounts of aluminum”. “Supposedly, one of the Lions frequently clashed with the divers while they cleaned your tank”, you have added.

The same sources have pointed out that the dolphins must be done “painful endoscopies periodically to remove them from the stomach all sorts of objects that are swallowed. Even, on at least one occasion, they extracted him a mobile phone of the stomach to a dolphin”.

They have also warned –based on the stories of the past– on cases of “attacks” the divers, as well as that of the beluga whale, KaiRo, “not accept your meal and the Russian coaches who were hired had secured him from the blowhole –delicate organ, painful and vital– and if not accepted the fish, full of all sorts of drugs, received a punch on the melon”.

Ago 5 years a dog and a small bird met in the Park, since they are inseparable.

Momo walked with his master Park one day like any other, then began to bark. The dog had found a hurt bird unable to fly.

Mr Yamashita helped the little bird and named Suzume. Although Yamashita took care of the bird in the hope that it would recover and later return to their habitat, Suzume managed never to fly again.

It was then that Yamashita decided to take a special course to learn the special care that needs the bird.

At the beginning Yamashita feared that Momo hurt to Suzume, or even that I would eat it, but the opposite happened.

Momo is very protective and is always on the lookout for Suzume, so the bird is never separated from his side.

Momo, the dog, and Suzume, the little bird, they play all day and together with his master, Mr Yamashita live in Chiba Prefecture, all as a sui generis happy family. They were seven months without seeing his family once he is frightened by Fireworks and fled werecat.
7 months is a long time for an animal. She probably feel abandoned and don't understand how anyone was going to seek the refuge that gave him shelter.

The workers of the shelters are saturated and can not spend too long an animal in particular, and it's not because they don't want it, are too many dogs that claim attention.

After 7 months of not seeing his family, your first reaction is of submission. She had been too long in a room with a lot of dogs that barked constantly. They are not quiet places.
At the end of the video, It shows happiness, licked the face a couple of times to its owner and struck the tail.

It is important to put the chip your pet. 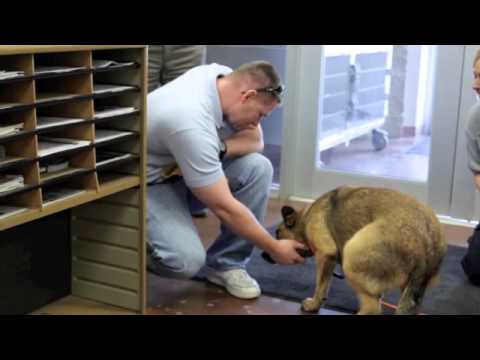