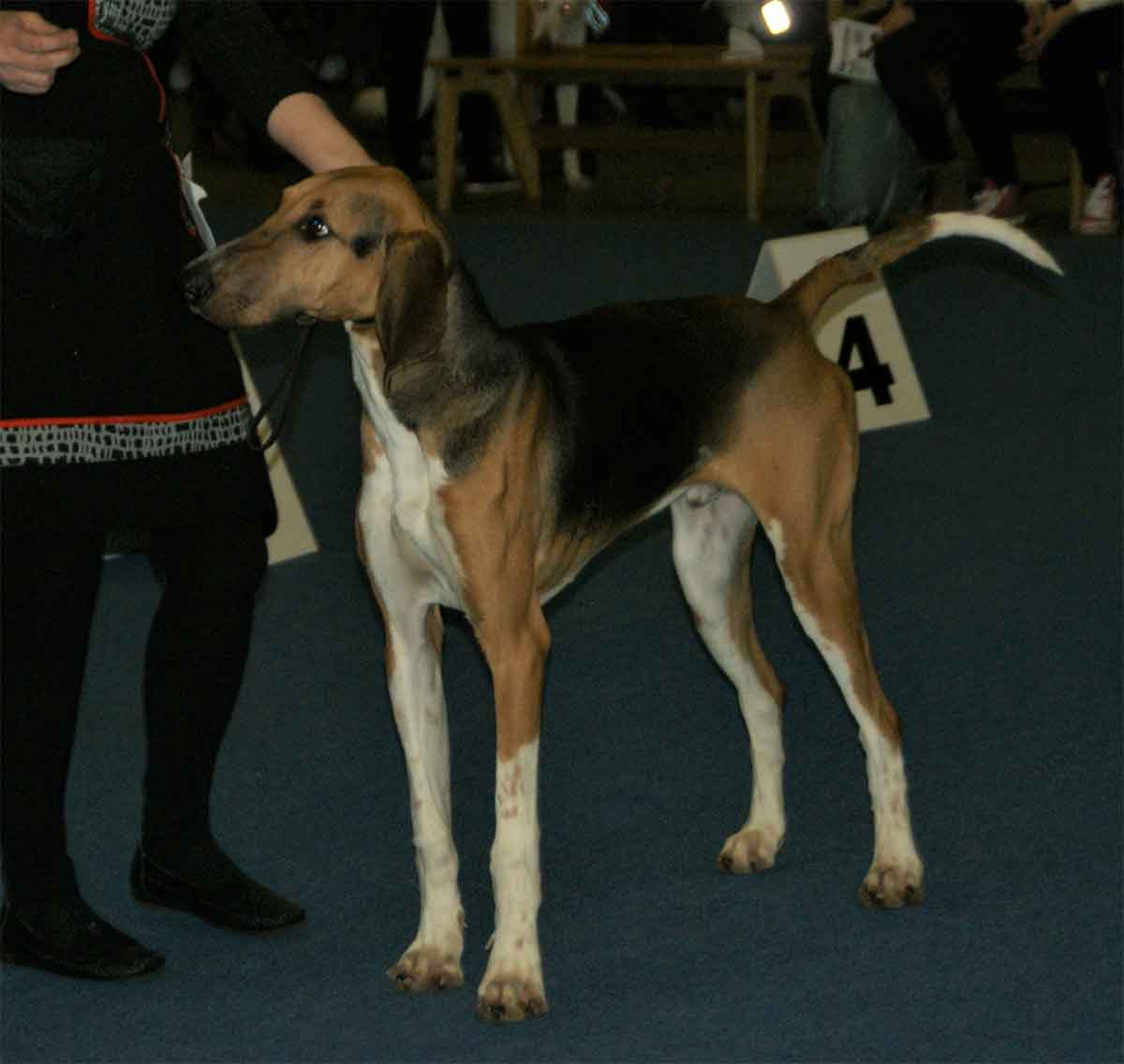 In the past, the Poitevin hound was also used as a wolf hunter.

The most widespread hypothesis about the origin of this breed of dog is that it was Viscount Émile de La Besge who began to breed the Poitevin hound in the first half of the 19th century. Their dogs, that he had received as a gift from an uncle, were the result of a union between Chiens Blancs du Roi and Larryes. The viscount did not breed any other dogs until rabies killed him in 1842. He lost all his animals except two bitches.

To restore its population, Émile de La Besge had six dogs brought to him from England (probably English Foxhound). However, then tried to roll back his influence by strict inbreeding. This is how the two males were born, Talbot and Rochester, and the two females, Tartane and Turbulente. Talbot and Turbulent They had a daughter, Dashing, who became famous for her particularly fine nose and speed. Mated with Traveller, an English male bred by him Conde Le Couteulx and gave birth to puppies of exceptional quality. It is assumed that Poitevin today are all descendants of Fringante and Traveller. However, a certain earl Henri de La Porte claimed that his uncles Auguste and Paul they had already begun to fix the race in 1835, and that at the beginning there were quite a few others, namely, the male Ténor and the female Ravissante.

The Poitevin hound was not accepted as a purebred dog for a long time. In the famous French hunting manualParforce, published in 1890 by the count Le Couteulx de Canteleu, they only mentioned “bastards of Haut-Poitou“, although the ability of dogs to hunt wolves was certainly appreciated. Besides the royal white dogs and the English Foxhound, it is said that the disappeared Larryes and Céris contributed to the creation of the breed. It was a Scent hound medium size white and orange. It is said that he looked like greyhounds and was a very good hare hunter. Perhaps it is from him that the special elegance of the Poitevin hound. Some cynologists also believe that it comes from Larrye, who is said to have had greyhounds in his ancestral line.

The coat of these pedigree dogs is short and shiny. Dogs are usually tricolor and have black fur or large black spots. Some specimens can also be two-tone orange and white or wolf-colored.. In general, the physique is powerful and elegant. The expressive dark eyes give the Poitevin a serious look.

The character of Poitevin hound is characterized by its resistance and toughness. This pedigree dog is not deterred even by rugged terrain. The race Poitevin is brave. He's kind to humans.

Dogs of this breed were bred for hunting and, usually, they are not satisfied with a life as a couch dog. Ideally, these dogs should be hunters. If you want to have a dog of this type, but do not use him to hunt, you must offer these animals a suitable occupation and sufficient exercise.

In the past, the Poitevin hound he specialized mainly in hunting wolves. He was tirelessly in the path of his difficult prey. But today this beautiful hunting dog, that is strong, elegant and light at the same time, can be used for hunting all animals. The forest of La Moulière, where did he born Poitevin hound ago 150 years under the aegis of the Viscount of La Besge, it was not easy terrain. Dogs had to be able to roam through dense, thorny undergrowth without hesitation and were not allowed to be disturbed by overhanging branches., gorse and the like. And to this day the breed has retained its special resistance and tenacity, allowing you to complete a task in any circumstance.

In addition, the Poitevin hound I needed a proper portion of courage, because I had to put the wolf, also, and it was much bigger than his own Poitevin. The Poitevin they even had to chase especially robust wolves, sometimes almost 100 km. During the night they and the dogs rested, but the next morning the Poitevin they had to be able to follow the trail again. For this they needed an extremely pronounced sense of smell.

Has been used to living in a kennel for a long time, so this is still the ideal way to keep the Poitevin hound. However, the kennel should be so large that the dogs that live in it have enough space to vent. One should strictly pay attention to the hygiene and cleanliness of his place.

Also outside the hunting season the Poitevin hound needs plenty of space and enough opportunities to run and play, a park would be ideal. If dogs live in a kennel, visit them as often as possible, because the relationship with humans should not be neglected.

The Poitevin is considered a dog with robust health. Little maintenance required. The short coat can be brushed from time to time. The ears should be checked regularly for parasites and cleaned. Dog owners who want to cover themselves as best as possible are advised to have medical insurance for dogs and liability insurance for dogs.

This dog eats for two, especially during hunting season. But he is not very picky and is satisfied with simple food. Daily 200 g of vegetables with 200 g of dog or rice flakes and 400 g of meat. Offal like liver, the kidneys and heart are particularly suitable. Especially for puppies and young dogs. Eggs also contain many valuable nutrients. They can be fed both cooked and raw. In certain circumstances, even with the shell. During hunting season, which is very hard for dogs, you must feed them fatty bacon. Of course, the dog must always have fresh water available. An automatic irrigation system is recommended here.

Where to buy a Poitevin hound

If you are interested in this breed of Scent hound and are looking for the right Poitevin hound breeder, you may need to plan a little more time for the search. These French hunting dogs are not very common outside their country of origin. For this reason, interested parties should look for a breeder in France.