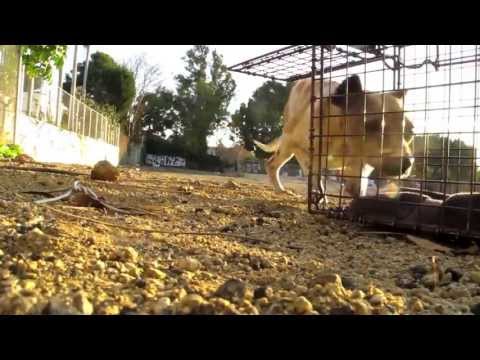 Ralph spent most of their days living in a pile of garbage when its former owner neglected him and submitted him to all kinds of humiliation before leaving it.

Despite the aggressive acts towards their rescuers, Ralph ends up revealing his true identity.


When officers arrived at the place where it was hung high, the dog was still alive

Two officers of the Local police of Arteixo rescued yesterday evening a puppy that was on the verge of dying hanged if they fail it to prevent security forces.

The agents received the warning from a neighbor who warned of the presence of a dog hanging from a tree in a field of the parish of Swabian, in Arteixo.

A patrol that was near the area went quickly to the call and found that he had a rope around the neck and that they had hung him from a considerable height with the clear intention to cause the death of the animal, Although he was alive.

The officers proceeded to remove the rope and down the tree. When was loose, they found that the animal was in a perfect state of health. They then proceeded to follow the standard protocol in these cases and the puppy was transferred to the Kennel that manages the As MARIÑAS Consortium.

Municipal police trying to now find out the identity of the person who has hung the dog, will fall within that a crime of animal abuse. In addition, also requested cooperation of citizens to give the author of the facts.

The animal, It is located in the As MARIÑAS Consortium Kennel, It can be adopted. The nightmare continues in the village of Villanustre, in Rianxo (La Coruña). The images of this town slipped in the media of all Spain five years ago because it was discovered that a family had each 130 dogs crammed between Lee and skeletons of animals in sheds, a refuge and at home. And yesterday the story was repeated. This time they had 19 dogs in identical conditions. But with an aggravating factor: the dogs were all between the courtyard and the home of the family, full of feces, bodies with an unbearable stench and canines. Seprona, Local police and volunteers took to the animals. But the drama of its owners is still intact.

To understand what happened yesterday must go back 25 years. Carmen Tubío - which is now in retirement age- and his daughter, Mari Carmen González, They then began to welcome dogs. They came to build a shelter and to be rewarded for his altruistic work. But they were hands. They put dogs in sheds, in your home… Everywhere. The year 2008, in theory, It was a before and an after in its history. It was discovered that dogs were living in horrific conditions and withdrew them 130 canes. And they sanctioned them. But it was not enough.

A few days ago, mother and daughter led to one of the copies to a veterinarian. They wanted that they cut hair. In the clinic, to see the terrible aspect of the animal — with wounds all over the body and numerous pathologies- He was told that it needed urgent attention. They marched. Someone saw them and reported the case to the Vox Ánima protective. Y, yesterday, an operation consisting of Seprona, Local police and officials of the protective of animals Vox bore and Moura landed in Villanustre. They wanted to get dogs for good. And they did. The daughter was not home - apparently, now lives in another village- and her mother left that they have to take the animals, Although it did between tears and saying to create correct dogs and your own family - in the House also lies her husband and an old- live so far: surrounded by stools. «Eu coidoos, EU coidoos. Non Eles can live sen nin us sen eles min», repeated between tears. The Seprona, I was trying to remove him his theory and reassure her, imputes to her and her daughter two separate offences of animal abuse.
Yesterday also came to light another most damning reality still. A bedridden elderly woman to live in that House, According to said some people who saw her yesterday, is not in optimum conditions. And Mari Carmen has a small son that, According to different witnesses, is in that home daily. The Civil Guard have arrested a man who shot several live dogs in a ravine in Tenerife, as reported on Tuesday the armed Institute.

The arrest came following a complaint made by an environmental group that found in the ravine of Biceche, in Arona, a dozen bodies of dogs in a State of decomposition, said in a statement the Guardia Civil.

Officials inspected the dogs and using a microchip reader located the person who appeared to be registered as an owner of two of them.

Once located, It charged him as the alleged perpetrator of a crime of animal abuse, they took her declaration and left him free with the obligation to appear before the judicial authority when required.

At that hearing the alleged perpetrator acknowledged having thrown two of the dogs, live, at the bottom of the ravine. Members of the associations advocacy and protective of animals have demanded today the authorities of Punta Umbría put brake to "wild and indiscriminate" killing dogs that have occurred "as a fun" in the last days.

Shot dead dogs lie at different points in the area of pine forests below the sea pine. Apparently, an Association of hunters of the coastal town have been called by the City Council and would have the blessings of the Junta de Andalucía to the abandoned dogs, days after a pack of hounds will cause the death of a foal. Representatives of associations concerned move tomorrow to Punta Umbria to try to stop the killing. Observatory on courts and Defensa Animal has already moved a petition to management which stresses that "domestic animals abandoned to their fate are victims of the human carelessness and the lack of adequate control measures" by the Administration, which must always act in accordance with the legislation on animal protection which requires capture and handling of animals avoiding violent methods or involving damage to the animal.

"Hunting for pets is immoral and illegal especially when alternative measures in line with current legislation and with the popular feeling that rejects flat hunting dogs and therefore that they must cease urgently are not planned". In the news, Add, There are technical means and human that make possible a humanitarian protocol with abandoned pets "without that it is justified in any case hunting and shooting death of these dogs".