Residents of one of South Africa's most popular tourist destinations are facing a serious problem -. Hungry baboons attack not only on the street, but also stolen in the houses of the inhabitants of Cape Town. The baboons climb the steep walls of the high-rise buildings, and they enter through the open windows of the apartments to get the spoils.
Usually, they enter homes in search of food, but sometimes a shade or a stuffed toy may be.

The victims of these unusual offenders are limited to used paintball guns and pepper sprays, as the Baboon a protected species . However, These methods only served to scare away briefly to primates, After a time hunger forces them to return back to the houses.

The photos shows a scene that was already familiar to the inhabitants of Cape Town. 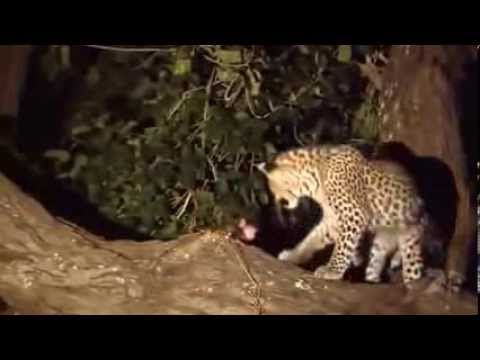 A Leopard kill to survive, and sorry for compassion [video] Each island has its own natural ecosystem, It may be rapidly disrupted by the arrival of new species of animals. It can be fun for tourists, but it is a real disaster for the ecology. Here they are 7 wonderful islands that have changed, and broken off its natural balance. Okunoshima is a small island located in the inland sea of Japan, in the city of Takehara, Hiroshima Prefecture. It is accessible by ferry from Tadanoumi and Omishima. There are sites for camping, paths and historic sites on the island. It is often called Usagi Shima (ウサギ 島 “Rabbit Island”?) It is known for the numerous wild rabbits that roam the island. His docility makes that she is closer to human beings. The 2012 comes to an end, It is a good time to reflect and remember the most important stories of the year. So we're going to watch crazy, beautiful and fascinating videos of animals in the most implausible situations.

Unfortunately, some of the stories of animals of this year left us few reasons to smile.

Abuse on farms, poaching and smuggling were only some of the problems that attacked animal welfare and conservation.

In terms of domestic animals, millions of stray dogs and cats are slaughtered each year. To support conservation efforts, consider making a small donation for the World Wide Fund for nature here.

You can also visit the website of ASPCA or Petfinder.com for more information about how to help pets needing a home.

Hamlet the Mini Pig – Goes Down the Stairs

Empress?????? Joey moving in the pouch

BOXER PUPPY GREETED BY HERD OF COWS ON WALK! AMAZING TO SEE Dumurkota, an Indian village, He suffered an attack of a herd of elephants who arrived in search of alcohol after having drunk already almost 500 litres.

Animals, at the beginning they were looking for food and they had come to tea and rice plantations, they suddenly felt the smell of alcohol that came from a store. Attracted by the scent, elephants ransacked the premises and was drank 18 barrels of liquor. The effect was devastating. The crazed elephants entered Dumurkota and destroyed at least three homes trying to get more alcohol. In addition, they trampled the plantations of local farmers. Police officers who arrived to calm the animals and let them return to your herd reported that the elephants were only part of a large community whose migratory route passed near Dumurkota. An OWL who is afraid of flying in large open spaces, feel safe in your own House of red brick.

Gandalf, the great Grey Owl, you afraid of flying in bad weather by what their owners have built his Aviary inside a brick shed. Now Gandalf spends his days watching the world through the window. “Their attitude of not wanting to fly in large open spaces is a bit cowardly”, said its owner. Agoraphobia?? This is the moment in which a three meter long alligator slithered out of a river and tried to steal prey from a very angry lionesses.

The audacious crocodile of the Nile – known by the locals as Fred – it risked becoming prey to approaching two fearsome adult females that eat together with their young.

But as we look at the video and the images we see a brave Fred that he does not flinch in his attempt to try to steal an impala Lions ended up killing.

Absorbed in their food, the big cats needed a few minutes to realize that Fred was going to them and in a moment looks as if it were to succeed as it opened its huge JAWS.

The Lion Cubs worked with caution to avoid become themselves in a tasty meal for the crocodile.

At the end it seems that Fred has managed to snatch a leg of the Impala.