The Dutch Shepherd Wiebe takes to drink water from a pond whenever he returns home after a pleasant ride,
Dorri Eijsermans, the owner of Wiebe, leverages to give food to the fish when both return ride. Fish have associated the time drinking Wiebe with lunch. They have begun to rise to the surface to recognize its presence. Wiebe seizes the moment to give a tender Kiss to carp.

Some French were exemplary of the island in the years 20 and they called the race, unique in the world, bichon frise

The American researcher Matthew Sell follow the trail in Tenerife of an endemic breed of dog from the island who was so famous that it became almost everyone and was coveted by Kings and nobles. Although during the last century, it bore the name of Tenerife, the French, its largest exporter during the period, they changed it and put bichon frise. The history of this pet is little known in the Canary Islands, unless someone related to the canine world. Showing its origin is virtually impossible, but the expert has him entering after the two world wars - the early years 20 and 50 - were France several copies to recover the species in France.

The group that helps Matthew Sell, among which is the Professor of the Universidad de La Laguna (ULL) Ulises Martin, want to know who these people were. The objective is to “trace the recent history of the bichon frise, It then disappeared from the island”. Veterinarians, as explained by the Canarian expert, they only record this type of races on the Peninsula, While there are no breeders in Tenerife. Somehow, This dog was recognized in Europe and “We do not know what adventures had in the Canary Islands”. “What we know is that around 1924 and 1950 they were exported to France”, indicates Martin.
Of the bichones which were sent from Tenerife descend the main lines and the best standards of the breed today. “We'd like to give with those who could raise or respond to this can of the island, because nobody today knows the bichon and there they have come from the Peninsula”, ensures the ULL expert.

It is not known with certainty in what century began the race or if extended thanks to Italian and Spanish sailors. The bichon as such began in the island and it is not known if it was the result of mixing with dogs of the guanches, It had small dogs like this.
Matthew Sell underlines that it is not known how this race was marketed, but that came to Europe. “Some think that the sailors used it as currency”, points. Through the paintings - as in the Dukes of Osuna, Goya - it is known that he was transferred to Italy especially, France and England. At that time it was called Tenerife, but little else appears on its origins, Adds the researcher. What is certain is that in the years 20 came to the island some French exporters to pick up two copies and took them to his country.

In 1933, However, France recorded the bichon as a race official in the country and took the name of Tenerife. In the news, where is most recognized this animal is in Australia, England and North America.

Due to lack of information, expert tries to find someone who has knowledge of the race between the decades of age 20 and 50. To contact the, Matthew Sell offers email [email protected] and phone 922644642. “We have found a photo of El Hierro with this dog”, but clarifies that when it gets an image we must analyze it because, as the animal has a long hair and drooping, They combed it and cut it in very different ways. “That complicates everything, since they can seem like two different races and actually be the same”, points.

The bichon has always been known for being small and company, with a white, fluffy fur and a cheerful and active character. This miniature dog has his sights put on a great title: Be the smallest dog in the world and be recorded as such in the Guinness Book of the Records.

Suni, the small Yorkshire Terrier, weighed only 45 g at birth, and three months later he measured only 6 height cm, It was smaller than the mobile phone of its owner.

While Sunni has gained weight since then, It is still a tiny dog, now weighs 100 g.
Veterinary from Jarocin, Poland, do not believe that it comes to weigh much more.

It is not much higher than a bottle of Nail Polish. For something is the smallest dog in the world. The dog “Pastor” is not named on a whim. Normally helps herding the herd, to ward off vermin that may cause irreparable damage and, in cases such as the following, It gives up the bottle to the Lamb.

It is a Springer Spaniel's 10 years of age called Jess. The dog was trained in such a way that it is capable of feeding the sheep as if it were a human being.

Its owner, Louise Moorhouse, a Dartmoor farmer, England, confessed that the Spaniel He was trained to assist the orphaned lambs. This is how he came to give them milk with a bottle.

Moorhouse said: “Jesse lived with sheep and lambs during his lifetime and is not afraid of any kind of animal. Sometimes she looks at me as if to say that she is fed up with this, but I know that he loves to do it because if not refuse”. Jesse is a Jack Russell very special you can do, literally, all the household chores, even tea cups, making dinner and fold bath towels.

Jesse is a dog of inexhaustible energy and insatiable curiosity. They require a constant training, consistent and patient that enables them to stimulate his acute intelligence.

To the Jack Russell has been used them successfully as actors, fact that has earned them conquer the popular sympathy because dogs are hard to beat charisma weapon.

Their videos in YouTube they involve more than 10 million visits

Jesse behavior is attributed to the positive reinforcement. 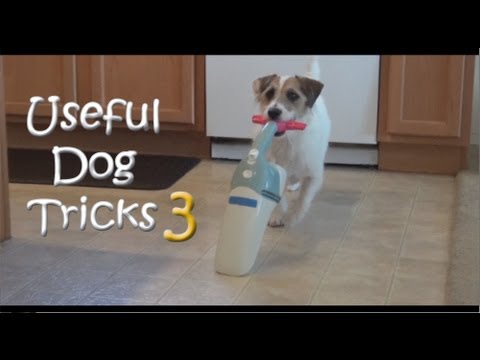 Here you have a graphics can help you understand some of the signals that you are given your pet.

Dogs were the first animals to be domesticated, and they have always given us help, company and security, but often do not understand what mean us, and it is very important that they also feel heard, After all, they give us the best years of your life.

6,35 centimeters in height and 170 g. of weight, make the Puerto Rican chihuahua Milly, supposedly the smallest dog in the world.

Milly just have little more than three months old, Although it has maintained the same weight since the third week of his birth, which suggests that you pluck the record to the chihuahua Boo Boo, the State of Kentucky, USA, considered the most tiny can of the planet so far, with 10,16 centimeters in height.

Owners looking for the Organization of the Guinness records book Milly as the dog to recognize more tiny planet. The relationship between a person and your pet can be absurd and sometimes petty. Even activities seemingly innocent as push a cat in a buggy or put bonds in the hair of a dog can be a cruel torture for the animal.
Here they are 10 of the things that owners likes to do with their pets.