The Setter It is a type of hunting dog used mainly for hunting quail, pheasants and capercaillies.

In the United Kingdom, the four breeds of Setter, together with the Pointer, usually form a subgroup within the group of hunting dogs, since they share a common function. However, each of the races of Setter has subtle differences in head, bones and substance.

The American and Canadian Kennel Clubs classify these breeds within the sporting group. The Setters of show lines are usually considered heavier and larger than those of “work”.

The Setter they tend to be cheerful and playful dogs and are usually very kind to both people and other dogs. They have a high amount of energy and require daily exercise.

The Pointing Dogs are divided into 2 sections, based on geographic criteria.

In this box we will focus on the Setter included in the Section 2 (British and Irish Pointers and Setters).

By your selection, the English Setter it's mostly a hunting dog, so you need activity

The origins of the English Setter are 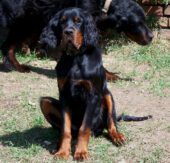 The name Gordon Setter is due to the Dukes of Richmond-Gordon, creators of the breed

The Irish Red Setter is spread throughout Europe