The Aardvarks or pigs mound they are native to Africa, mainly in the areas south of the Sahara. Its habitats are generally grasslands and open forests and its diet is composed of ants, termites, fruit and other insects. They will live where there are sufficient to feed termites, access to water and a sandy or clayey soil. If the soil is too hard, These Anteaters, Despite being fast digging, they will move to areas where digging is easy.

The majority of the Aardvarks are solitary and nocturnal, but sometimes come out during the day to sunbathe. When the dream is pressing them, they block the entrance of its burrow, leaving only a very small opening at the top, and become a tight ball. Especially during the rainy season, These Anteaters can dig new Burrows at night. Many animals, such as squirrels, hares, Civets, hyenas, jackals, wild boar, porcupines, lizards and birds use abandoned holes of the Aardvark as a refuge. In case of being attacked, can roll over on his back and defend themselves with their large claws or by using its thick tail to take a fatal leap away from his attackers.

It is nocturnal and has vision problems, This anteater is cautious out of its burrow. He looks at the entrance and remains immobile for several minutes. Then, suddenly you go jumping from powerful. Some 30 meters from its burrow stops, stands on its feet, It raises its ears and turns his head in all directions. If there is no sound, gives some jumps and, At last, It moves in a trot slow to search for food.

The Aardvarks they give birth to a baby. Hatchlings have a pink tone, hairless and remain in the burrow around 2 weeks. After two weeks they begin to follow their mother in his pursuit of food. The young breeding eat solid food from the 3 months of age and it is amamantada to the 4 months.

Around the 6 months, the young male becomes independent and goes on its own, While the young female remains with the mother until the next baby. The young female can then dig its own burrow a few meters away from his mother, joining her in the search of termites.

The main enemies of the adult aardvark are human (that he sometimes killed for their meat), Lions, hyenas, Leopards, and Pythons that attack the younger. The flesh of Aardvark is appreciated by many African tribes and many parts of the body of the aardvark are used as amulets: teeth are believed to prevent diseases. 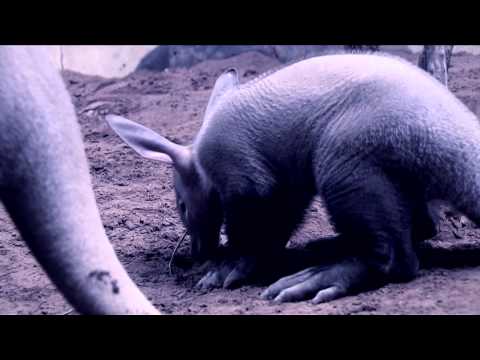