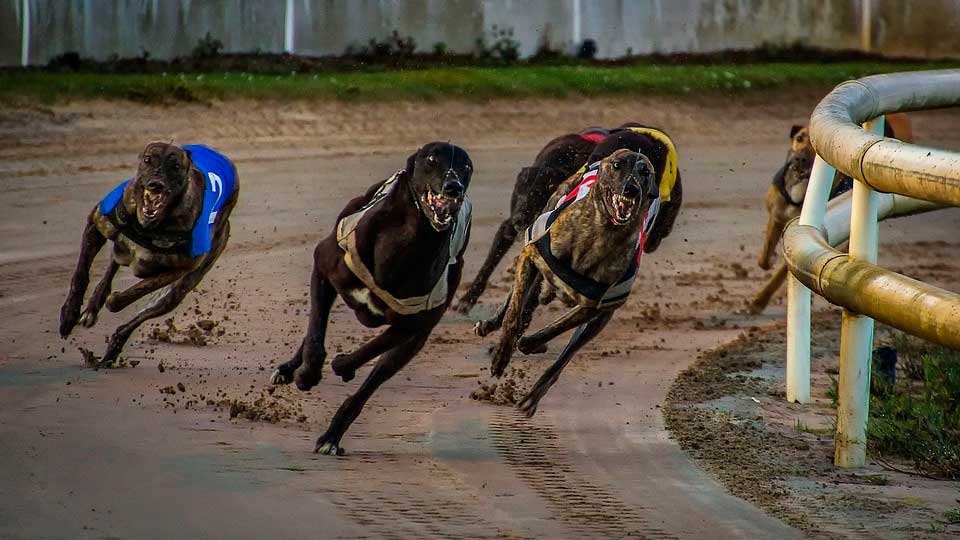 The greyhounds that still they bred for racing spend most of their time in boxes, pens or fenced enclosures without the love of a family. We can eliminate greyhound racing through education, compassion and action.

Greyhounds are disadvantaged even before birth. Thousands are raised annually, many more than those needed for racing, in an attempt to create the fastest dogs. Often cruel methods are used to get rid of unwanted dogs and dogs that survive in the industry are forced to live in overcrowded conditions. These social creatures are forced to spend most of their time alone, confined in cages for 20-23 hours a day and denied the opportunity to walk or play. Many dogs are injured while running races and are slaughtered.

Greyhound racing is cruel and inhumane and no place for them in the modern era.

When they first emerged at end of the XIX century, supporters did not know that hundreds of thousands of dogs suffer and die.

Since then, our society has evolved and dog racing are not synchronized with the values ​​of society towards animals.

Today, this type of unnecessary and wasteful suffering is rejected as a form of gambling or entertainment. According to government records now available, common injuries in racing include broken necks and backs, dislocations, torn muscles and paralysis. There have also been electrocutions when dogs come into contact with the lure of high-voltage track. Some dogs die on the track while others are euthanized because of the severity of their injuries or simply because of their value decreased as brokers.

Do not greyhounds used for racing manicured?

Racing greyhounds endure lives of confinement, They are subject to standard practices that are cruel and suffer injuries and even death. Greyhounds used for racing are kept in cages, just large enough so they can stop or turn around, until 23 hours per day. Shredded paper or carpet remnants are used as bed.

Do greyhound racing contribute to the overpopulation of dogs?

Yes. From the Platform Not the Chase (NAC) They estimate that in Spain 'left over' annually about 50.000 greyhounds. The racing industry exacerbates an overproduction of dogs, simply displace other homeless animals and diverts resources to address other challenges Animal welfare. 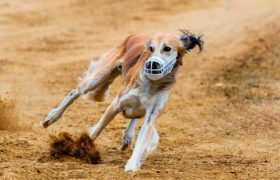 In the State of Florida (USA), the court will decide whether to vote an amendment to ban racing, declining in the US.

In Argentina, greyhound racing are prohibited. The law prohibits throughout its territory performing dog racing, any race. Seeks to end a practice that in many cases, as protectionist, It is accompanied by a cruel treatment to animals. The goal is to sustain economic activity. It does not consider that the life of the animal, raised in extreme conditions, is of 5 years. After that, some try to sell galgueros, often for hunting, where they suffer injuries; otherwise they abandon or kill.

Meanwhile in Portugal, Bill No. 1095 / XIII / 4th determines the prohibition of Bull Dogs best known for greyhound racing. The prohibition extends to the entire national territory, regardless of the race of the dog.

In uruguay, The 20 in December of 2018, President of the Republic sent the National Assembly a bill which prohibits throughout the national territory of the dog races.

In Spain, originally, FEG regulated three modes, Canódromo, Liebre open field and Mechanics, of which there are currently only two last.

It is inhumane greyhound race? 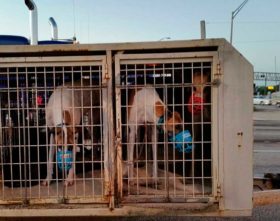 Yes. In the United States, thousands of dogs in this industry are kept in enclosures kennels. These enclosures consist of long, narrow buildings with pens for dogs: Dirt tracks where dogs are fenced “removed” and they allowed them to your needs. In these areas, dogs are kept in kennels style warehouse in rows of cages stacked metal.

In the dog tracks of the different states, Greyhounds often suffer serious injuries. Since January 2008 until April 2018, They have documented a total of 15.273 injuries greyhound. The most commonly reported injury was a broken leg. Other injuries included head trauma, Electrocution fractures and back.

Two dog tracks were recorded West Virginia 8.159 greyhound injuries between January 2008 and March 2018, including at the least 398 dogs died or were euthanized.

Do racing greyhounds are drugged?

Data are taken from the United States. In the last decade, has been 438 greyhounds drugged on the ski Florida, including 73 greyhounds drugged with cocaine. Other positive drugs include Novocaine, lidocaine, Industrial solvent DMSO, and opiates like oxycodone and oxymorphone. Greyhound breeders claim that cocaine positives come from environmental pollution, a ridiculous theory that has never been tested in a single case. The state agrees that this scenario is unlikely: “Division finds it much more likely that a prohibited substance is provided to an animal racing purpose for the animal trainer”.

Yes. A greyhound females routinely given an anabolic steroid to prevent the loss of race days. In the legislative testimony 2017, Greyhounds Association of Florida estimated the 50 percent of female dogs receiving this drug. This practice is prohibited in greyhound racing in Britain, Australia and New Zealand, due to concerns of integrity and animal welfare. Industry manual Care of the Retired Greyhound Racing and states that the use of anabolic steroids can result in serious side effects harmful, including increased aggression and virilization. According to the Merck Veterinary Manual, “Long-term suppression of zeal is not recommended using androgens, because it is not documented to be safe in breeding dogs… The safety and efficacy of injectable testosterone, as it is commonly practiced in racing greyhounds, has not been supported by controlled studies are not advised”.

How are fed racing greyhounds?

In the United States, to reduce costs, Greyhounds are fed raw meat of dead animals, dying, sick or disabled (call “meat 4-D”) which it has been deemed unfit for human consumption. Was added carbon denatured meat 4-D to prevent human use. The meat industry uses this inferior quality to reduce costs. According to a manual industry, this meat is used because “It is the most economically feasible for the greyhound industry at this time”. Greyhounds at particular risk of disease pathogens such as salmonella and E. coli, because they are fed raw meat 4-D. Greyhound coaches refuse to cook meat because they believe that dogs would cause less competitive.

Is the transmission of disease a concern in greyhound racing? 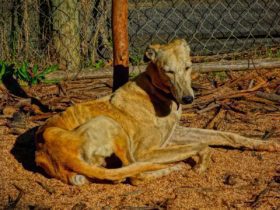 Yes. The very structure of the industry dog ​​racing allows the spread of contagious diseases. Because hundreds of dogs live in kennels at racetracks storage, when a dog gets sick, many more are exposed. Confinement of dogs in small spaces, the high density of dogs on the tracks and transporting dogs across state lines for racing, this allows diseases to spread faster and farther than they would otherwise. It's the perfect storm for the transmission of animal disease and stressed by poorly socialized that move in a national circuit to advance the industry profits. When diseases attack, quarantines are imposed at the discretion of the owners of the tracks, which they have strong financial incentives to keep dogs in races.

Do greyhound racing help the economy?

Not. Greyhound racing are declining and are not sustainable. Currently, 40 states prohibit commercial greyhound racing and community after community, racing dogs have been replaced by more modern forms of entertainment.

Why coaches greyhound dogs treat those who depend on an inhumane manner?

This is an industry driven by profit and those involved are always looking for ways to cut costs and maximize profits. Dogs are only valued if they win money for their owners. If they stop making money, it is economically desirable to rule out dogs and breeding performance under new, perpetuating the endless cycle of cruelty.

Do people in the industry do not love their dogs?

People who love dogs treats them as if they were part of the family, in as profit machines. This industry is not built on love, It is built on profits from the exploitation of dogs.

You do not have dogs playtime each day?

While it is true that greyhounds are allowed to leave their cages for short periods of time to make their needs, These “shifts” only amount to a few hours per day. Time spent outside their cages does not justify the confinement greyhounds support. This is no way to treat a dog.

Are not greyhound racing highly regulated? 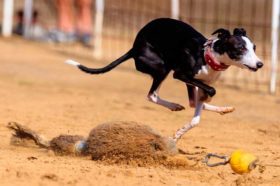 The states with active tracks have minimal regulations regarding dog racing, but these regulations do not prevent thousands of dogs endure lives of confinement, nor prevent hundreds of dogs are seriously injured.

Greyhound racing are largely self-regulated and that does not replace a public policy that prevents dogs are cruelly treated for profit. Controls are made at the insistence of humanitarian organizations. Now the humanitarian community is united in its view that this industry languishing must stop the mistreatment of dogs.

En el Southland Greyhound Park Arkansas, between January 2008 and April 2018 were registered 1.148 injuries greyhound, including at the least 35 dogs died or were euthanized.

Greyhound Park in Iowa were recorded 416 greyhound injuries between January 2008 and October 2017, including at the least 29 dogs died or were euthanized.

Is the greyhound industry in decline?

Yes. In the United States, greyhound racing are now illegal in 40 states and be eliminated in Florida for 1 in January of 2021. Between 2001 and 2014, the total amount wagered on greyhound racing across the country decreased 70%. This includes betting on live dog racing and simulcast betting, where bettors bet remotely on races taking place elsewhere.