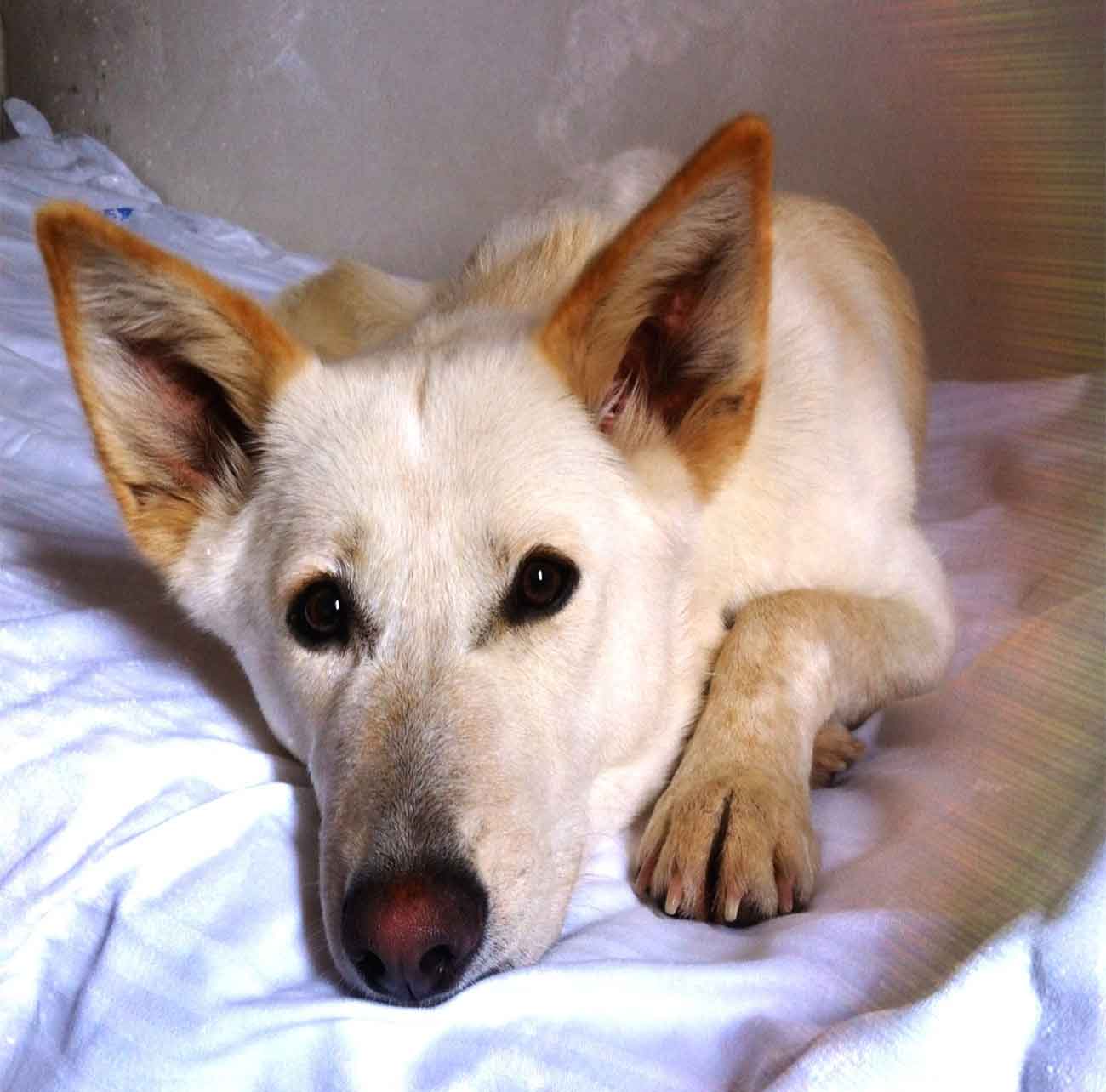 Suspicious of strangers and very affectionate towards members of his clan

The Canaan Dog belong to the group of “pariah dog”, found throughout the Afro-Asian region. They live near human settlements, tolerated by humans, but they are not encouraged or fed. For primitive peoples they are useful as a destroyer of all organic waste. Even today, the Canaan Dog they live in herds in the desert. If Bedouins need a guard dog for their camp or a herding dog for their sheep, They look for a wild female who raises her cubs in a cave, they throw a piece of bread at him every now and then until they have chosen the strongest male cub that will guard their camp in the future.

Cynologically, the “pariah dog” belong to the Spitz family, the oldest family of dogs in the world. Thousands of years old rock paintings show these dogs as hunting helpers. With the time, the original type of Spitz adapted to the situation of its environment. The Canaan Dog is the most developed form of the type Spitz in Israel today. The Canaan dogs still have strong survival instincts, what makes them smart, independent and also very cautious dogs.

The Canaan breed has been domesticated by outcast wild dogs, namely, by Rudolphina Menzel, a canine behaviorist and cynologist who emigrated from Vienna to Palestine in the 1930. He took some of them home and was amazed at how easily they were tamed and trained. They were lively and loving. The teacher Menzel I call them Canaan dogs honoring the biblical land of Canaan and campaigned for them to be recognized as a race.

The height at the withers of these square animals, strong and medium in size is about 50 a 60 cm., while males are usually much larger than females. In general, sex characteristics between male and female dogs are very pronounced. For example, the rather broad skull of the Canaan Dog, that narrows at a point towards the front, is clearly visible, especially in males. The head is always well proportioned. Standing ears, slightly laterally arranged, triangular and wide, as well as his dark almond eyes, give you a very alert and intelligent expression. In fact, nothing escapes the watchman Canaan Dog, even when asleep.

COLOR:
Sandy to reddish brown, white, black or mottled, with or without mask. If there is a mask, must be symmetrical. A black mask and white markings are allowed for all colors. A pattern such as the Boston Terrier. Gray colors are not allowed, striped, black and tan or tricolor. The characteristic colors of the desert – sandy, Golden, Red and cream – are particularly typical of the breed.

The Canaan Dog is lively, sensitive, distrustful of strangers, defensive, but not aggressive by nature. Watcher not only of humans, but also other animals. He is faithful and devoted to his family. The relationship with its owner means for him a partnership, both sides taking and giving. The Canaan Dog you don't have to follow your owner everywhere and submissively read every wish in his eyes. There are times when he shows his love and wants to be caressed. But other times he takes care of his own affairs and only belongs to himself. If one responds to his character, a deep understanding develops between man and animal, which is even more attractive, since one must acquire their trust and affection. This special bond makes it difficult to place Canaan Dog adults in new settings.

Protects their owner's children and shows a lot of tolerance towards the little ones. However, parents should ensure the dog has a chance to withdraw.

The Canaan Dog they are good watchdogs, but they are not attackers by nature. Only when a Canaan Dog you have the impression that he or his family is seriously threatened, will attack. The Canaan Dog barks as a warning, gives a dangerous appearance, and that is usually enough.

The Canaan Dog can react aggressively to other dogs who dare to pass by his property. Aggression between dogs of the same sex is not uncommon among Canaanites. Each Canaan is different. You have to watch it closely to know what collisions – with other dogs on walks – it is better to avoid.

A Canaan Dog he would never do anything that could harm himself. Nor would he comply with his owner's orders without first questioning their meaning.. You can't demand obedience from this dog. However, once you have gained confidence in your human and recognize him as “leader of the pack”, is very cooperative and obedient. Loyalty to his master and his quick understanding make him, despite its independence, an easy-to-handle dog, who can learn the necessary basic obedience without restrictions. However, during training its primitive nature must be taken into account, so it certainly takes some compromises and tricks to convince the Canaan Dog that obedience is worth it. For inexperienced beginners, this self confident breed is not suitable.

Where can I get Canaan Dog?

Today, not only in his homeland Israel, but also in the US. and in several European countries, like germany, Finland, England, Italy or Switzerland, there are breeders who have dedicated themselves to this special and still very rare breed. The addresses of the breeders can be found in the national kennel clubs or, of course, on the Internet. If you are considering buying a Canaan, enough time should be taken to consider your purchase decision thoroughly. This is true of all dogs, but especially for him Canaan Dog, because this original and independent four-legged friend is no ordinary family dog.

The rough coat naturally repels dirt and only needs to be brushed once or twice a week. Only in the phase of the biannual coat change should it come into contact with a brush or comb daily to remove dead hairs from the dense undercoat and reduce the tuft of carpet hairs, the sofa or the blanket.

While the Canaan, as “pariah dog” on freedom, forages for its own food and feeds on whatever organic waste humans leave behind, as a domestic dog it depends on the support of its owner. But what do you give such an original wild dog? In general: Dogs are carnivores by nature, no matter if they are Sheepdogs, Dachshund or even Canaan. This means that the food must be largely meat. (around the 70 per cent). Meat is the most important protein source for the dog. Its entire masticatory and digestive system is oriented to the processing of meat: the strong teeth, the strong chewing muscles, the relatively short intestinal tract and digestive juices that are quite aggressive in contrast to humans.

The race Canaan Dog it is very healthy does not have typical diseases and is considered very clean.

Ratings of the Canaan dog

Coexistence is important that you have with your new friend. Before considering the acquisition of a dog of the breed “Canaan Dog” you know certain factors. Not all breeds of dogs are apt to live in an apartment, You must take into account their character, their need for exercise, their interaction with other pets, your care and if you have young children, their level of tolerance towards them.