The three races (Griffon Bruxellois, Griffon belge and Petit Brabançon) originate from a small wire-haired dog named “Smousje“, that has been in Brussels for centuries.
In the 19th century, the addition of blood from the Cavalier King Charles spaniel and the Pug gave the breed its short black fur, and set the current rate. These little dogs are very vigilant and were bred to watch over carriages and keep stables free of rodents..
In 1883, the first Griffon Bruxellois in the L.O.S.H. (Saint Hubertus Book of Origins). Son Topsy (L.O.S.H. nº 163) and Foxine (L.O.S.H. nº 164). Towards 1900 they became very popular, among other things because of the royal interest of Queen Marie Henriette of Belgium. Many of the dogs were exported abroad and contributed to the spread and popularity of the breed.

They are small companion dogs.; Smart, well balanced, alerts, proud, robust, almost square in constitution; well endowed with bones, but also elegant in their gait and constitution; they attract attention for their almost human expression.

Both Griffons have rough fur with a beard, mustache and eyebrows and are differentiated by their color: the Griffon Bruxellois It is red, reddish (leonado) and the Griffon belge is it black or black and tan.

Originally from Belgium, as 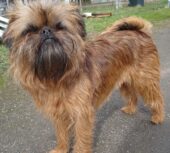 The Griffon Bruxellois is known to have a big heart, and a strong desire to snuggle and spend long hours with your