Pinscher and Schnauzer were originally free range and farm dogs. They had to protect large stables from intruders, chase away rats and mice or accompany wagons. They are vigilant and distrustful of strangers

The FCI brings together in this group dogs traditionally used as shepherds and guardians for their brave and determined character. Pinschers have short, hard coats like the Dobermann. The Schnauzer type are characterized by their hairy snout. In the two types, smaller breeds are appreciated companion animals.

Type dogs Affenpinscher They are known since about 1600, years. At that time,

The Austrian Pinscher descends from old Austrian Landpinscher, it was still widespread in the

Although the Dobermann has a reputation for being a sharp and even sinister dog, his devoted fans consider him the most loving and

Born to follow the horse and rider, and catch the rats in the blocks.

The Dutch Smoushond is a very ancient race. Its

The German Pinscher is a dog, extremely, active and lively, alert and vigilant.

The German Pinscher (German pinscher “bite”) is a breed of 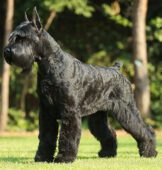 The Giant Schnauzer is a balanced dog, sweet with children and distrustful with strangers.

The Giant Schnauzer is a breed of dog

The Miniature Pinscher has much temperament, vitality and is an excellent companion dog.

It is often thought that the Pinscher miniatura is a 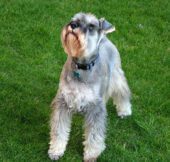 The Miniature Schnauzer It is only a balanced and affectionate companion dog.

The Miniature Schnauzer It is derived from the Standard Schnauzer,