History, physical characteristics, character and skills, images and videos of the cat breeds that begin with the letters T-U-V-X-Y-Z

This equivalent to the Burmese short hair cat created a New Zealand nurturer, June Mateer. His first crossing of a Burmese and a

The Rex Tennessee is a natural mutation that spontaneously appeared in the Tennessee Valley in the summer of 2004.
Cats are

This race, the only member of the Group of Asian long-haired, Persian chinchilla goes back to the same mating of the cat's

One of the most popular breeds in North America, the Tonquinés is a hybrid of the Siamese and the … END_OF_DOCUMENT_TOKEN_TO_BE_REPLACED

The toyger is a creation of Judy Sugden. At the end of the Decade of 1980 began to use their … END_OF_DOCUMENT_TOKEN_TO_BE_REPLACED 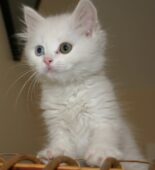 Van breed has lived in the vicinity of the city of Van (Turkey) for centuries. It is a breed that you

Origin: Turkey
Old: Prior to the 18th
Character: Active and independent
Weight: 3 - 8,5 kg

The range is a range that appeared natural and isolation in the mountainous area of Lake Van, to the East of Turkey,