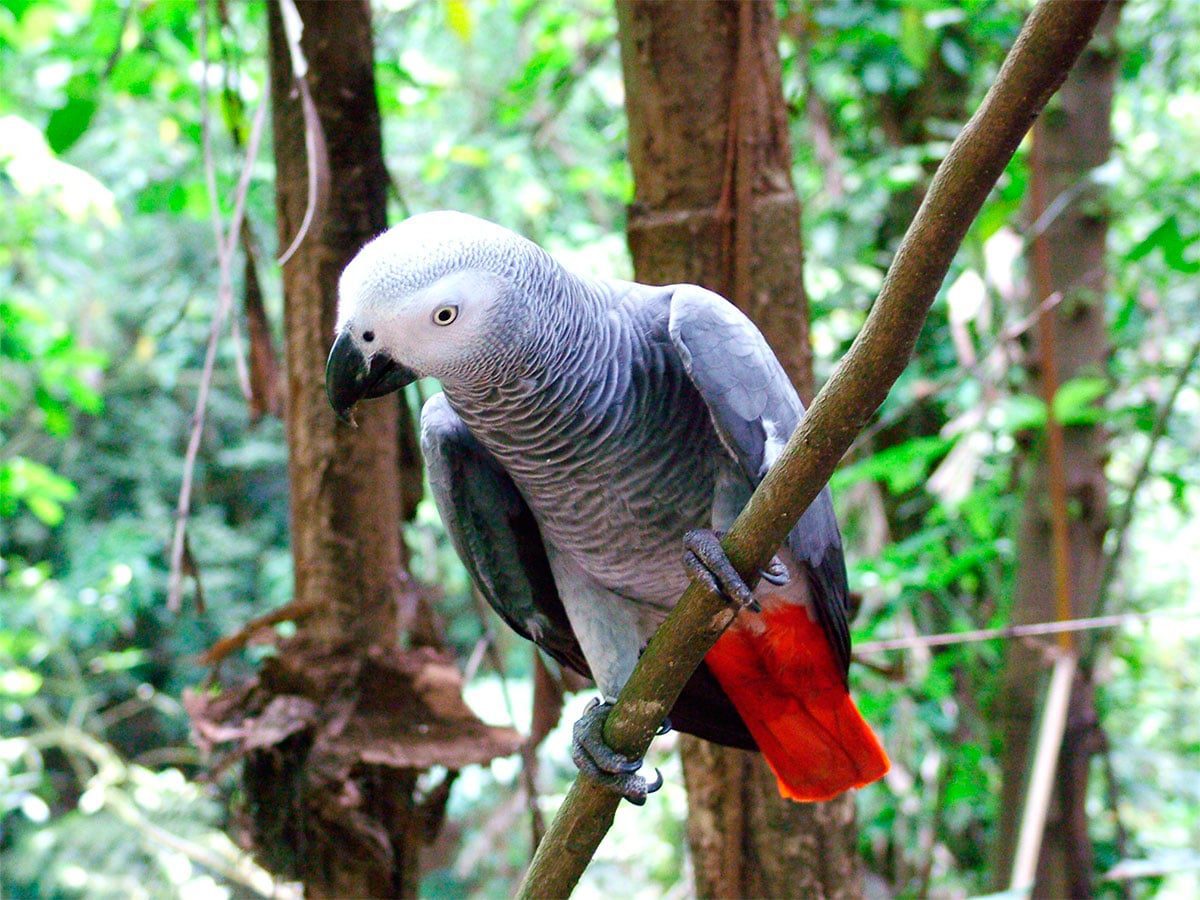 The Grey Parrot (Psittacus erithacus) is famous for its intelligence and ability to mimic sounds and human speech, so it is one of the most popular of all pets avian. It is one of the largest African parrots.

They have the feathers of the lores, the cheeks, the frenyou and the crown silver grey, more clear tips. The of the the mantle and lower area of the back darker, Grey Slate with clear margins, giving a scaly appearance; the lower area of the back and tail are silver grey. Upper wing coverts, secondaries and scapulars slaty-grey. Primaries grey dark (almost black), more clear below that top.

Wing feathers light grey, with the exception of the greater coverts that are of a dark grey tone.

Feathers of the chest Grey Slate with pale grey margins fused with silver feathers much clearer in the belly; flanks and the thighs clear silver grey color.

Tail and their coverts, bright Scarlet.

Older birds they can show scattered red feathers between the plumage gray, especially in the the thighs and the belly.

Without sexual dimorphism in the plumage.

Immature they have the tail darker red towards the tip, Grey dye in undertail- coverts and the irises grey.

The Grey Parrot They inhabit the tropical jungle primary and secondary, the forest edges and clearings, Gallery forest and mangroves; wooded Savannah, haunting, often, land cultivation and even gardens.

Partially confined in the lowlands, Although in the East of its range have been recorded at altitudes of 2.200 m.

They reach the highest densities in primary lowland forests, intermediate in the primary montane and lower density in plantation of coconut.

Gregarious, they form large communal roosts of up to 10.000 individuals, often at some distance from the feeding areas.

Favorite places of shelter are trees or Palm trees on the water, also islands in rivers.

Are dispersed into smaller groups (until 30) to feed.

The reproduction of the Grey Parrot takes place in loose colonies, in which each pair occupies its own tree. Individuals select their partners carefully and have a monogamous union of lifelong It begins at sexual maturity, between three and five years of age.

Few details are known about the courtship in nature, but have been observed and recorded flights of visualization around the nest cavities. The males feed their mates (power dating) and both sing soft monotonous notes. At this time the female goes to sleep to the nest cavity, While the male takes care of it.

In captivity, the Grey Parrot fed males to females after copulation events and both sexes participate in a mating dance in tipping its wings.

The nest they build it into the cavities of trees (for example, Terminalia, Ceiba or Distemonathus), between 10 and 30 meters above the ground.

Sometimes breeds in colonies of up to several hundred couples loose (in Prince for example), but in most places they nest in solitary.

The breeding season varies with the town. In East Africa, breeding has been recorded in the months of January-February and June-July, both in dry periods.

Young chicks have been released for sale from March onwards in Ghana. Other records suggest as a rule from the breeder, the dry season.

The females lay from three to five eggs, that you are in charge of incubate while they are powered entirely by the male. The incubation lasts approximately thirty days and the young man emerges from the nest at twelve weeks of age.

Their diet consists of a variety of seeds, nuts, fruits and berries.

The fruit of the Palm oil (Elaeis guineensis) is her favourite in some areas, coming to bear its fruit over long distances before being consumed.

In Bioko, they prefer the berries of Tragacantha tail (Fam. Malvaceae).

They can be a pest, to cause significant damage in some areas corn crops.

The Grey Parrot are distributed between the West and centre of Africa, of Guinea-Bissau and this from Sierra Leone, across the South of Mali, Ivory Coast, Ghana and Nigeria, until Cameroon, extending to Bioko and Islands Santo Tomé and Principe in the Gulf of Guinea; from Gabon and the Congo through Zaire, Uganda and Western Kenya, the Southwest and East - Central of Zaire and Northwest of Tanzania.

Generally sedentary. Common where large tracts of forest persist and still abundant in some locations, especially in the tropical jungles of the Congo basin. However, due to the extensive loss of forests in some parts of the range (for example, of Nigeria - Sierra Leone) and the catch on a massive scale (the second best-selling parrot in the world in the Decade of 1980) There have been dramatic declines in some places (for example, in Liberia, Ghana, Kenya and around Kinshasa, Zaire, and other cities of the Congo basin).

The Grey Parrot They are protected by the convention CITES, consisting in annex II (species that may be threatened by a trade out of control).

If it is considered not threatened globally, the fact of being one of the species of the family Psittacidae (parrots and parakeets) most sold in the world makes its distribution is shrinking dramatically in certain places, being near its extinction in many of these areas according to the Organization The World Parrot Trust [4].

The following data are quite illustrative in this respect:

1. In the period 1982-1989 It was the second psittacida then suffered more trade of Agapornis fischeri, with averages of more of 47.000 specimens exported from Africa annually [1].

3. Too often these fees are widely sobrepadas by exporting countries. For example Cameroon exported 23.000 grays in 1996, When available a quota of! 12.000! [2]. Although these facts to do that Cameroon could not legally exported in 1997, the current quota of 12.000 grays is exceeded with more of 15.000 all the years [5]. Another example, is the Republic of the Congo, with an annual fee of 10.000 grays, that has also been sanctioned by the impossibility of exporting them in 2001 and 2002 by the large number of existing fraudulent export [6].

4. In the year 1999, the European Union imported (legally under the Convention CITES) from Africa 33.341 greys parrots, number only surpassed by parrots of the genus in this family Agapornis (71.588 of Agapornis roseicollis, 63.867 of Agapornis fischeri and 33.720 of Agapornis personatus). Spain It was the second destination of these parrots grays, After Netherlands, imported 6.216 specimens [7].

5. There are specific areas Africa It supported much of the pressure from hunters of parrots for their trade. One of them is the area of Lobeke, in the southeast of Cameroon, where they hunt every year more than 15.000 grays, most of them die by mishandling in the capture and transport [5].

The before mentioned illegal trade is no stranger to our country, where was recently dismantled an international network of illegal import of this species from the Republic of the Congo, I had brought to Spain at least 3.982 specimens from the year 1998 [7].

On the other hand, in some countries, these birds are raised industrially for sale. This favours on the one hand the fact that decreases the importation of birds hunted in the wild [2], and on the other hand it increases the number of birds on the market, and with it the chance of leaks or intentional releases, that they can get to colonize areas outside its area of distribution. An example of a Spanish company of these features, among the many that are, It has more than 300 breeding pairs, can be found in [8].

The ancient Egyptians already kept these birds as pets. Later the Greeks and the Romans did the same.

While the Grey Parrot they can be good pets, If you have children in your home, buying a Grey Parrot It would be a bad idea, by both the Parrot and the children that can be easily damaged with its claws and beak.

The Grey Parrot they can also be difficult to maintain for some people, This is probably due, Unlike other pets, because these are always active and they must be checked several times a day. These parrots can be unordered, for example, When they are eating the seeds or other foods it is likely that they end up throwing debris out of the cage and even against the walls.

More Intelligent any dog, calls attention to the 24 hours a day. His extreme intelligence and sensitivity takes you easily to the depression if it is unrequited.

It is a bird very long-lived, There are those who say that these animals can live 73 and up 93 years. More longevity record reliable, However, It is a specimen that was still alive after 49,7 years. In captivity, these animals they tend to breed to the 5 years of age.

Their cages they must also be cleaned daily, due to their feces, they are totally inconsistent and appear in their feeders, toys, or anywhere else in the cage. Because of this, you have to wash the cages thoroughly to remove any odor and bacteria.

To the Grey Parrot like biting everything, and when I say everything, I say this seriously. They mostly enjoy chew pieces of wood, probably because they do in nature, However, be aware that they will chew everything at your fingertips, clothing, curtains, the skin of our sofas, etc. If you have many objects in the House, make sure that they are safe when I leave their birds out of the cage.

Note: In the European Community and the United States this prohibited the marketing of these parrots if they have been captured in wild environments.

Sounds: Martin St-Michel (Xeno-canto)
(9) – A pet Congo African Grey Parrot in a cage By Angela from Portugal (Hello hello!Uploaded by Snowmanradio) [CC BY 2.0], via Wikimedia Commons