In the section 2 you will find breeds of dogs from northern Europe, from North America and also from Asia.

They are characterized by their striking human kindness, his passion for hunting and his courage in setting up and maintaining the game. The Nordic hunting dog follows the hunt in silence, only after fixing, barks loudly and persistently. Despite their individuality and independence so typical of the Nordics, are faithful and follow their word when properly and consistently trained and guided.

They are lively hunting dogs of medium size, with an almost square complexion, muscular and ringed tail.

▷ All about these breeds: Origins and history – Physical characteristics – Character and skills – Health and maintenance – Images and videos. 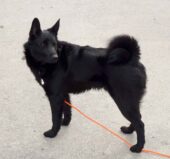 Among the three moose hunters of the North

The East Siberian Laika is popular in its native Russia not only as a hunting dog, but also as a draft dog 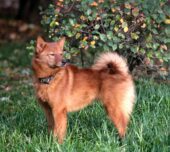 It is a dog that can annoy the neighbors, because he barks a lot and with a particularly penetrating voice.

This four-legged friend of color

The roots of this Norwegian national dog go back a long way: and the findings of the Age of

Still very old, the breed was not recognized until the year 1946, previously it was confused with the … END_OF_DOCUMENT_TOKEN_TO_BE_REPLACED

The Karelian Bear Dog is a very independent and intelligent dog.

The Karelian Bear Dog, which also bears the name

The Norrbottenspets is also used as a draft dog.

The Norrbottenspets (Spitz from the North Bothnia country) I probably know

Most of these dogs live in Norway and Finland, it is believed that there are some 2000 copies around the world.

It is characterized by its great sense of orientation and its tendency to avoid being confined.

The Laika is a breed of dog

In its country of origin, Russia, The West Siberian Laika has been bred as a hunting dog for centuries.

The Laika of Siberia