The American Bobtail he is playful and intelligent. Some have dog features, they learn tricks and can retrieve things The history of American Bobtail started with a serendipitous find in the 1960, to Yodie, a street cat wild aspect picked up in Arizona by John and Brenda Sanders, Iowa.

From 1980 the goal was to produce a wild looking tabby cat based on the look of the Yodie, and the Bobtail eventually gained acceptance in major North American registries, Although it is still rare. The version of long hair was the first recognized as a breed.

Due to the mating of the most diverse animals, the gene pool of Bobtail Americano it is especially wide, which contributes to the cats being largely free of hereditary diseases typical of the breed.

With the recognition of the TICA (International Cat Association) in 1989, breeders achieved their greatest success to date. The American Bobtail is also recognized as a breed in the LOOF standard. (Livre Officiel des Origines Félines).

The American Bobtail It is a medium-sized cat and reaches a body weight of about seven kilograms. His body is athletic and muscular with a broad chest.. How the front legs are longer than the back legs, the back curves towards the neck.

The special feature of this cat is the tail, which is due to a spontaneous genetic mutation and is inherited in a dominant way. The cat's tail is not uniform in appearance: may be curved, curled and knotted. The length or shortness of the tail also varies. (as orientation, the length of the tail of the American Bobtail is about a third of that of other cats).

The American Bobtail he also has hair between his toes.

In general, all coat colors and patterns are recognized. The length of the coat is also left open in the standard and is not defined in a binding way. However, the cat American Bobtail always has a double and dense coat, which is smooth and shiny.

As with other breeds of cats, the character traits of individuals can vary greatly.

However, there is the following trend in the cat American Bobtail:

Care and health of the "American bobtail cat" 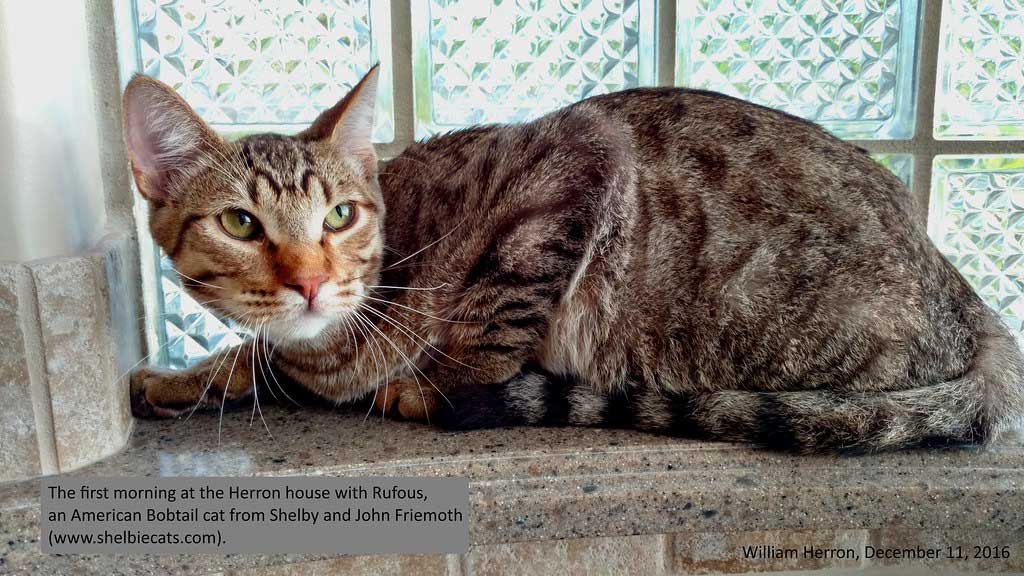 The American Bobtail he is an affectionate cat that does not stay well alone. If the human has no time for him, at least another cat should be present. However, he will also make friends with dogs if he can gradually get used to the other species..

This velvet-footed cat has no preference for a certain category of people, older people and children alike like it. The only important thing is that there is someone at home with whom you can relate. By the way: the communication of American Bobtail it is comparatively quiet. Their sounds are less like those of a cat than those of a cooing dove.

Since the genome of American Bobtail is based on that of common house cats, there is genetic diversity. Therefore, the breed cat rarely sick.

However, can have hip problems due to the difference in length of the legs and in the spine due to its stubby tail. You can also suffer from all the typical diseases of domestic cats throughout your life. The susceptibility to dental problems also appears to be slightly increased in the American Bobtail.

Since the American Bobtail is lively, a large garden or unlimited access to the outside would be ideal for them. As a result, holding abroad is the recommended way, but with the premise that the cat can enter the protected indoor area in bad weather, at night and in case of danger.

If the apartment is furnished adequately for cats, indoor accommodation can also be considered. However, tickets must be well secured. The American Bobtail you are curious and smart, making it prone to escape maneuvers. It's lightning fast and smart enough to learn the mechanism of a handle. For security, lock the front door, even if you are present.

How much activity does the "American bobtail cat"?

The American Bobtail has phases in which you like to exercise. However, your desire for physical activity is in a comfortable mid-range.

What he likes are smart toys and scratching posts where he can climb and sharpen his claws. But, Anyway, these should not be lacking in a home that accepts cats, so it is an absolutely normal cat in this aspect.

The American Bobtail it is very simple in terms of daily grooming routine. It also has no special food needs or a coat that needs grooming.. However, cats who are overly interested in food get fat pretty quickly, but you can avoid it with an automatic food portioner or a manual allocation of the same. The most important thing is that the food is composed of high-quality ingredients and that it adapts to the characteristics of the cat. (depending on your age, your possible illnesses / intolerances and your individual energy needs).

The cat's coat American Bobtail it is generally very easy to care. However, during the coat change, the effort increases by the minute. You can help the cat change its coat by brushing it daily and removing tangles. Many breeds - especially short-haired cats- can get by without the daily grooming program.

The cat American Bobtail is only recognized since 1989. Therefore, it is still a young breed that can only be purchased from selected breeders. Make sure you only buy from people you can visit in person and see for yourself the state of the animals and the living conditions there. Sellers who reject this request are not serious.

Purchase price may vary based on genetic lineage, sex, age and appearance. Expect a minimum price of about 1.000 EUR by a purebred animal.

Although the purchase price is above average, you will spend exactly the same amount on maintenance costs as with other cats. Calculated over the years, high purchasing costs will be reduced.

Coexistence is important that you have with your new friend. Before considering the acquisition of a cat of the breed "American bobtail cat" you know certain factors. You must take into account their character, their need for exercise, their interaction with other pets, your care and if you have young children, their level of tolerance towards them.

If you liked, rate this entry.
4.7/5 (15 Reviews)
Share with your friends !!
TwitterFacebookPinterest