The American Longhair Cat has a great addition to the stables, since it tends to be very fond of other animals such as horses, goats and cows, and tends to get along very well with dogs. Times, cats Maine Coon se denominan American Longhairs, because they were developed in the United States. 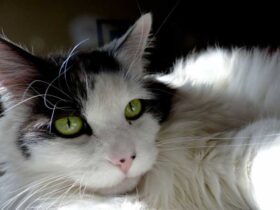 Most of the American long-haired cats they have a bit of the upturned nose of Persian cats, pero esto varía entre los individuos. Athletic, well-muscled body is the standard, along with the double coat, dense and abundant molt.

Personality American Longhair Cat it is usually quite peaceful, with a slightly independent vein.

Can be a great choice for a busy home or a working single, since it does not require too much care, but its long coat requires some care, as it tangles easily without good brushing once or twice a week. 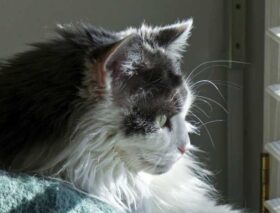 The American Longhairs tend to be slightly more active than any of their parent breeds. They are more athletic than the Persian cat and, in general, friendlier than him American shorthair cat.

These cats are a great addition to stables, since they are usually very affectionate with other animals such as horses, goats and cows, and they tend to get along very well with dogs. Big dogs don't have to be too picky about him American Longhair big boned, and small dogs often find a warm pampering partner.

These kittens are not usually lap cats, but due to the influence of Persian cat they can be very pleasant and patient companions for the elderly or those who cannot leave the house, provided your grooming needs are met.

The American Longhair enjoys the outdoors a lot and can spend a lot of time looking out the window. Fortunately, they are usually easy to train and quiet enough to fit into a harness and leash for a short walk outside.

These cats adapt well to various lifestyles, but they may not be the first choice for a family with many young children, not because they are aggressive, but because they can be elusive, choosing to avoid the fuss.

Hermoso, long-lived and resistant, the American Longhair Cat it can be a wonderful pet for the right home.

Coexistence is important that you have with your new friend. Before considering the acquisition of a cat of the breed "American Longhair Cat (Maine Coon)" you know certain factors. You must take into account their character, their need for exercise, their interaction with other pets, their care and if you have small children, their level of tolerance towards them.