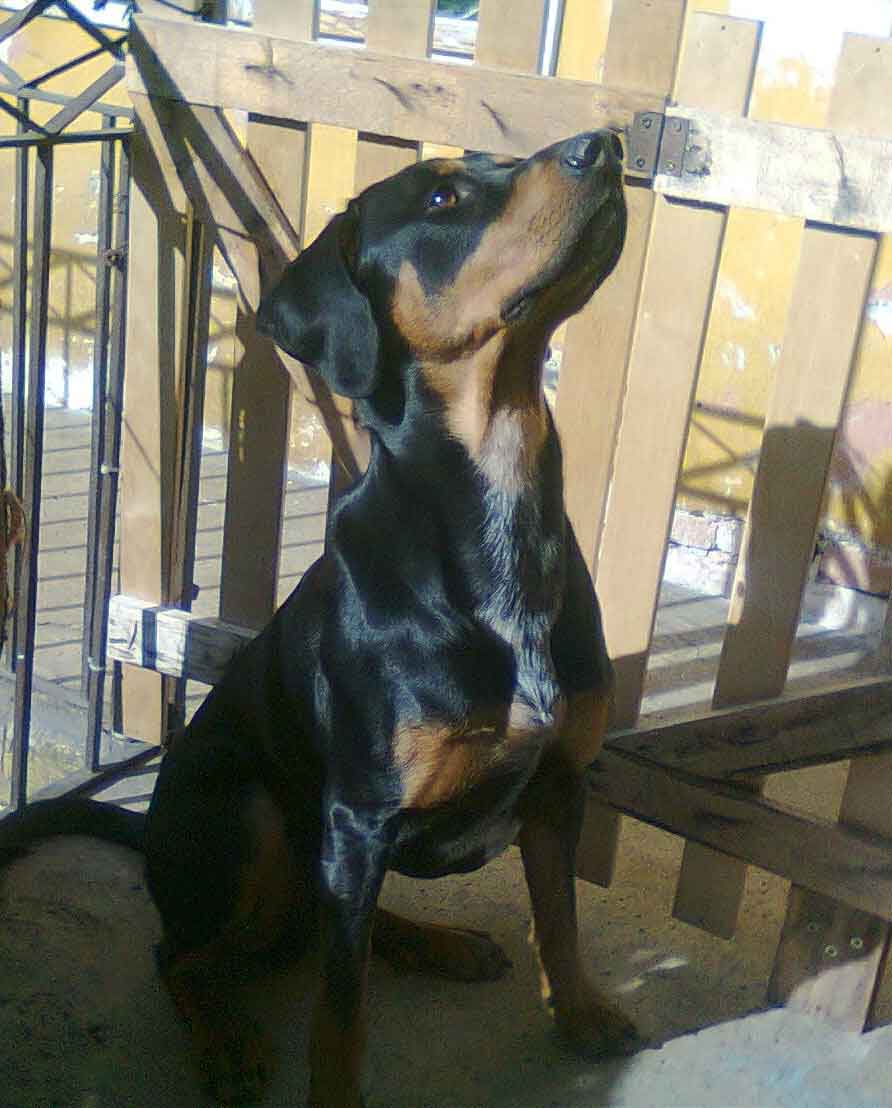 The Transylvanian Scent Hound it is a very old hungarian breed, whose development has been influenced by climatic conditions, the nature of the terrain and hunting methods in this part of the world.

The breed had its golden age in the Middle Ages, When the Hungarian Hound He was the favorite hunting dog of the nobility. The development of agriculture and forestry moved away from hunting grounds, and its use moved to the inaccessible mountains and forests of the Carpathians.

This change in territory and habit has led to the creation of two different varieties of Transylvanian Scent Hound: one bigger and one smaller.

Both varieties were always bred together. Originally, the great Hungarian Hound it was used to hunt big game: first buffalo, later bear, wild boar and lynx. The “Small-sized Hounds” they were used to hunt small game (foxes, hares) in covered terrain and for hunting “chamois” in rocky areas.

The dog Carpathian Hound grows up 65 cm and weighs at least 25 kg. Whole body, including lower belly, is covered in short hair, dense, smooth and thick that rests well against the body. The basic color is black with tan on the muzzle and legs. The tail is and is carried above the top line when awake, slightly bent up. Hanging ears, set at mid-height, lie close to the cheeks without wrinkles, put forward barely cover the eyes.

Expressive and loving nature – a dog with very good skills.

The Transylvanian Scent Hound adapted perfectly to the extreme climatic conditions of his homeland. Here the robust breed had to struggle not only with the cold and snowy winters, but also with hot summer days. Hunting in the Carpathians was very demanding due to the dense and hardly accessible mountains. To be able to work all year round in these treacherous areas, the Hungarian Hound developed not only his physical stature but also his mental abilities.

With its marked sense of smell, his extraordinary sense of direction, his great resistance and his enormous dexterity, This race, in addition to qualities such as self-confidence and predatory instinct, provides everything an excellent hunting dog needs. They are capable of making smart decisions in almost all hunting situations and communicate their success with a clear voice. Like many hound dogs, the Hungarian Hound is a professional at hard work.

At home, the Transylvanian Scent Hound he is a very friendly and calm dog, that is closely tied to its owner, to children and family members. As it is also highly regarded as a guard dog, behaves suspicious of strangers, at first it tends to be a bit reserved, but it doesn't seem dangerous or aggressive at all.

If the dog is well socialized and educated at a young age, relaxed demeanor is expressed, obedient and social, also together with conspecifics.

The Transylvanian Scent Hound need plenty of exercise, preferably combined with work, such as hunting. Their owners must have an active lifestyle to meet the requirements of keeping a hunting dog.. If sufficient conditions for exercise and employment are met, this breed can be kept in the house or apartment without problems.

Coexistence is important that you have with your new friend. Before considering the acquisition of a dog of the breed “Hungarian Hound (Transylvanian Scent Hound)” you know certain factors. Not all breeds of dogs are apt to live in an apartment, You must take into account their character, their need for exercise, their interaction with other pets, your care and if you have young children, their level of tolerance towards them. The Cimarrón uruguayo Bulldog is a dog type molosoide, medium-sized, Compact and strong, the fur can be striped or also bayo (cream-coloured) and snout black. His temperament is docile, cunning and guardian, ideal for guard, company or hunting. It is recognized as a race in Uruguay from 1989 and internationally by the Federation Cynologique Internationale – FCI, from the 21 in February of 2006.

Etymologically Cimarron is a term applied in America (originally on the island of Hispaniola) everything having been domestic or civilized he returned to the wild or wild state, by referring in this case to their refuge in the heights (Indeed in the mountains and valleys hidden) Sierras, with making sheep would be “who lives in the tops or hidden in them”.

The original copies of the feral dog descended from dogs brought by the Spanish and Portuguese conquistadors.
The natural crosses that were taking place in the wild is that it evolved in the course of two centuries a native variety perfectly adapted to the environment of the Uruguayan Plains.

«Tell his master that when me missing men to fight his minions», «them I have to fight with runaway dogs»: José Gervasio Artigas to the Gral. Carlos Federico Lecor.

Non-domestic dogs in the world, original species or breeds produced by the asilvestramiento of domestic races returned to the natural environment and managed to readjust to the same show a completely different to this physical development, so it is highly arguable that this breed produced in the Uruguay as a supposed model maroons dogs mentioned in ancient chronicles and documents reflect the natural demeanor of those. All wild dogs of the world, by what is known as “convergence” evolutionary level they have long legs, erect ears, slender body, exceptions that occur in extreme climates (enormous ears of certain dogs of African deserts or small ears of Arctic foxes).

There are detailed Chronicles of attacks by packs of these dogs to caravans and people, that led to the authorities of the time (end of the 18th century) they already have and encourage major massacres, reaching count by tens of thousands dead dogs.

Each dead animal was paid by the authorities of the time, requiring proof of death presented the jaw or the pair of ears of the animal. This practice it would lead to characteristic cutting ear performed many newborn calves, in the form of “ear of puma”.

Despite these massacres, «…a good number of mothers with his offspring won the mountains of the Olimar and especially in the sierra de Otazo and long hills», in what is now known as departments of Cerro Largo and Treinta y Tres, where many ranchers and landowners in this place, they took advantage of the virtues of this breed for working with cattle and defense of his property, beginning to raise it, preserving the mixing.

Modern traces of the race start to become more public in the early of 1980, When numerous breeders of Montevideo, attracted by the notable features some exemplary, they begin to develop their parenting and standardization.

It is in 1989 When this work begins to pay its fruits, to being the Cimarrón Uruguayo officially recognized by the Association of the Rural Uruguay (A.R.U.) and the Kennel Club Uruguayo (K.C.U.), 20 years after the first exposure of a specimen of the breed in the K.C.U.
It thus creates the Association of breeders of Maroons Uruguayans and next to the K.C.U. It prepares the official roll of the race, selecting the dogs the same base and registering their offspring, being tattooed with this registration number first.

Today the attributes of character of this race called Cimarron They make it increasingly popular in Uruguay and region, to be used as a companion dog, Guard and hunting, in particular that of the boar.

It is excellent to work with cattle dog, hunting and guard. Predominant livestock activity of these lands and the consequent abundance of food without great competition with other natural predators, the Cimarron was reproduced in large numbers making it – According to historical documents – in a real pest and scourge for the inhabitants of the campaign and the livestock.

This race since its standardization has attracted a growing interest both within the Uruguay border, having copies of this dog in America, from United States to Argentina, with the latter several breeders of Cimarrón Uruguayo.
One of the steps made in the genetic improvement of so-called race Cimarrón Uruguayo is the signing of an agreement between the University of the Eastern Republic of Uruguay, through its Faculty of veterinary medicine with the Maroons breeders society for the study of the zootechnical status and consanguinity of the exemplary enrolled in their rolls.

This long process of standardization was crowned the 21 in February of 2006 When the International Bureau of the Federation Cynologique Internationale (FCI) gives international recognition to the Uruguayan Cimarron.

The breed standard states that the dog must have great courage. Like all large dogs, Cimarron Uruguayo should be well socialized when very young if you want to be kept as a companion. It is a very friendly dog ​​with children and other animals.

Cimarron Uruguayo is sometimes used for surveillance, hunting and all dog sports in his native Uruguay. Being a very intelligent dog has been used for all kinds of jobs, as rescue or grazing.

A dog is fairly quiet and stable, rarely bark unless the threat is real.

The primitive Cimarrón dog, by its roots in the Uruguayan territory, It has been a symbol of the independence struggle from the same beginning of the national identity of this town, faithfully reflected in the letter sent by General José Gervasio Artigas in response to General Carlos Federico Lecor, Count of la Laguna and Governor of the Provincia Cisplatina (current Uruguay) in which Artigas expressed that if it was left without soldiers to fight, It would be with dogs Maroons.

Is this tradition that this breed is now symbol and mascot of the national Uruguay army, having a preferential place in the annual military parades of the 18 July. On this occasion, a soldier of the battalion of Blandengues (the company at the time knew how to lead the same Artigas) He rides leading the parade carried a Moorish Steed without along rider which is a sheep dog by the flange.

DOGS CIMARRONES, EVERYTHING YOU NEED TO KNOW