History, physical characteristics, character and skills, pictures and videos of dog breeds that begin with the letter D

Although it is kept as a companion dog, the Dachshund is still a passionate hunting dog, persistent, fine and agile nose.

It is a dog whose standard requires what in other terriers are considered very serious defects.

This terrier shot was specially developed around

Although the Dobermann has a reputation for being a sharp and even sinister dog, his devoted fans consider him the most loving and 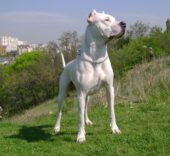 He is a fierce guardian and defender. It is not convenient to stimulate their aggressiveness.

The Dogo Argentino (Argentine Dogo) is a breed of dog, created by the doctor

Their aggressiveness should not be excessively stimulated. It is an optimal guardian and defender without the need for training.

The Dogo Canario It is a classic moloso.

The Dogue de Bordeaux It is very faithful to its owner and loving with children.

The Dogue de Bordeaux, it's a molossian in size

The most widespread variety is the long-haired one, but the breed is almost unknown outside the Dutch borders.

The Dutch shepherd comes down

Born to follow the horse and rider, and catch the rats in the blocks.

The Dutch Smoushond is a very ancient race. Its

It is found only in its country of origin and is practically unknown outside its borders.

The Norwegian Hound was originally called Dunker, in