History, physical characteristics, character and skills, images and videos of dog breeds that begin with the letter E

The Elkhound Swedish, also called Jämthund, It is a breed of dog of Spitz type of Northern Europe. Jämthund is an eponym of

English Water Spaniel (Spanish water dog) It is a breed of dog that has been extinct since the first part of the 20th century, 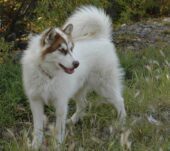 The dog Canadian Eskimo is an Arctic breed of dog, often considered the oldest in North America and the rarer

The Eurasier, sometimes referred to as Eurasia, is a breed of dog, type Spitz, It originated in Germany.

The Euskal Artzain Txakurra (Basque Shepherd) is a breed of dog