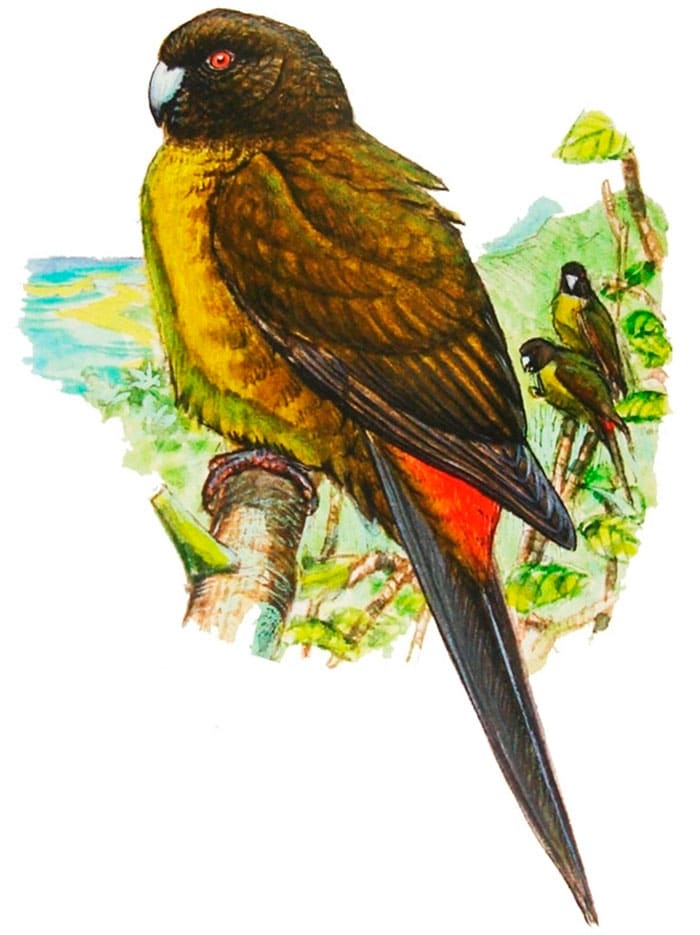 The Raiatea Parakeet (Cyanoramphus ulietanus) had the head blackish brown, paler on neck, Rump and wings. The lower part of the back and tail coverts were brownish-red; and under wing-coverts and outerweb the flight feathers were gray-blue. Había un borde gris en las plumas primaries and secondaries. The chest, the abdomen and the under tail were yellow olive. The feathers of the middle tail were olive brown. The outer feathers tail were gray.

The irises were probably orange-red in the adult and juvenile brown. The legs were grayish brown. The bill was pale blue-gray or gray-brown to black tip. The males and females se parecían.

It is believed that it was a kind forest, when the Society Islands They were all wooded.

It knows nothing about the reproductive habits of this parrot or why died.

Nothing is known about the eating habits of this parrot.

Of the Raiatea Parakeet sólo se conoce de dos especímenes en Raiatea, in the Society Islands of the french polynesia (Forshaw and Cooper 1989), collected on the trip Cook in 1773, and now Vienna and Tring (Knox y Walters 1994).

• Current category of the Red List of the UICN: EXTINCT.

This species was known in the Isla de Raiatea, french polynesia, but now it is extinct, probably as a result of habitat or cleaning action of invasive species.

There remains no existing population.

It is believed that the two bodies of this parrot that remain dissected in two museums, the Natural History Museum London and the Naturhistorisches Museum, They were collected by Georg Forster in 1773 or 1774 during the second voyage of Capitán Cook (Stresemann 1950). However, Medway (2009), based on the travel journal Joseph Banks, He thought they were collected in November 1777 during the third trip Cook. It seems likely that no collection will be made on Raiatea in 1768 during the first trip Cook, since the natives were hostile, which is why Forster probablemente obtuvo ambos especímenes en el segundo. However, There is some confusion as to the locality, but Forster (1844) It refers to a “Psittacus pacificus” seen in Otaheite (Tahití) and Oriadea (Raiatea), from where Greenway (1967) presumed that found and collected Cyanoramphus zealandicus en Tahití y C. ulietanus in Raiatea. unusually, Forster He did not consider the two species as different.