Of 33 to 36 cm.. height can weigh between 350 gr y 450 gr.
The Orange-winged Parrot (Amazona amazonica) It is distinguishable by having the Centre of the crown and cheeks yellow, separated by the forecrown and sides of the crown pale blue, edge of the wing orange, and inside of the tail Orange with stripe green in the Middle.
The copies juveniles have a color different to it of them adults; the head is green, Blue and pale yellow.
It is not possible to determine the sex of the Amazons in a safe manner by their appearance.

Frequently is seen in pairs or in flocks numerous out of it breeding season.

It is a kind monogamous (the couple stays together for life).

It nests in trunks of Palms killed apparently at the end of the season dry.
The female lays from 3 to 5 eggs and she incubates them for three weeks approximately. the chicks take two months to develop.

It feeds on various fruits, seeds and sprouts leaves. Including the fruit of Palms (Sloanea, Richeria and Byrsonima) , flowers Erythrina and sometimes cocoa.
You can take oranges and mangoes of the cultivated areas when other food is scarce.

North and Central South America to the East of Peru, Brazilian Amazon and northeast of Bolivia.

Trapped for the wild bird trade: they have been 268.510 wild-caught individuals for international trade from 1981.
In some areas of its area of distribution are hunted as food for the population indigenous.
The loss of habitat is also a concern.

Popular as a mascot for more than 100 years.
Loving, playful, with good ability to speak, sociable with people.

Known for being very friendly, easy to train, very Smart.
They need constant attention of their owners, they carry out all kinds of fun pranks to get that attention.
Over time, they will form a strong bond with his owner, they can however be quite noisy. They will make noise early in the morning and when the Sun is setting. This usually lasts for a few 10 minutes, to wake up and just before sleep. 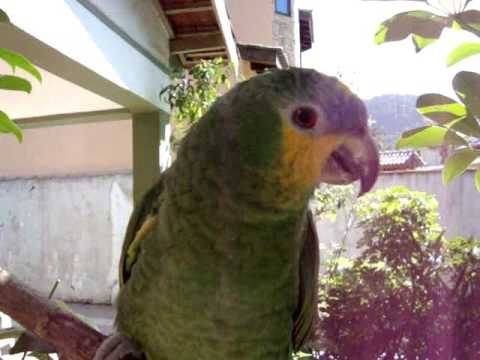 My lorita ISA amzona winged and speaking a lot makes too much noise and likes to eat bones .
My question is how many years has to live.
Thank you

It is known from winged Amazon who have lived during 30 years in captivity. There are anecdotal reports of these birds that have lived longer, until 71 years, but these reports remain unverified. It is a long-lived bird, and taking into account reports of similar species, an age between 50 and 60 years It is possible for this Amazon.