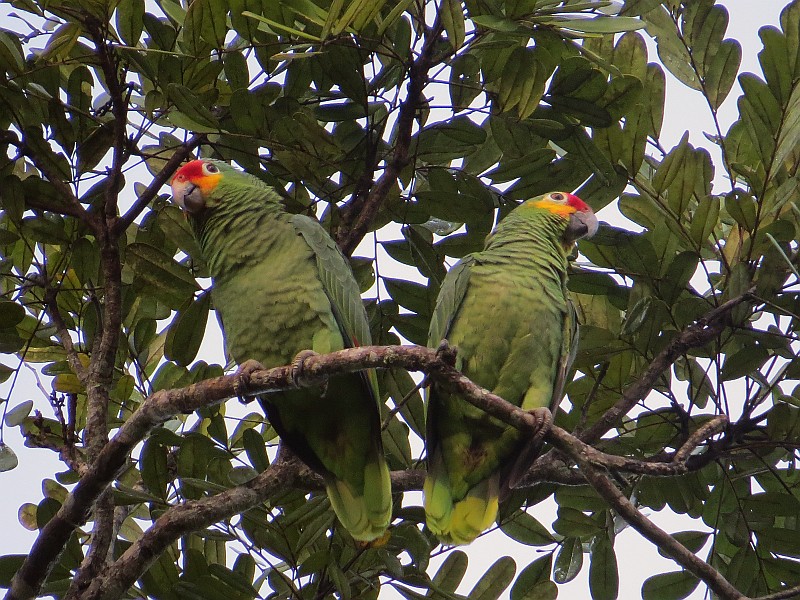 The Diademed Parrot (Amazona Diadema) It is generally green, with black edges to feathers crown, to the mantle and the chest; crown green to nape; the back of the green neck, mauve margin; feathers of the cere and forecrown, red; yellow-green, less yellow in upper cheeks, up to the ear-coverts; secondaries red on the bases, the green rest; tail green; eye ring pale yellow; eyes oranges; bill dark grey.

It is likely to frequent a variety of habitats from lowland forest species, including edges evergreen forest, as well as modified areas containing scattered trees or plantations (Del Hoyo et al., 1997, pit et to the., 2016).

They are in loose flocks or pairs, are gregarious When feed.

The laying is of 2-3 eggs. Breeding season, It is supposed to be in early: January-March.

Endemic low Black river and the northern margin of Amazon River, in the states of amazon and Northwest of For, in Brazil.

Based on a model of future deforestation on amazon basin and susceptibility to this new species capture, it is suspected that its population will suffer a very fast along three generations descent from 2002, so it is in danger of extinction.

This species is expected to lose between 49 and 55% suitable habitat within its distribution throughout three generations (37 years) starting at 2002, based on a model of Amazon deforestation (Soares-Filho et to the). Given its susceptibility to capture, It is suspected that species decline by 50-79% during this time.

• The main threat to this species is the accelerating deforestation in the Amazon Basin as land is cleared for ranching and soy production, provided by the expansion of the road network, together with his susceptibility to capture (Soares-Filho et to the. 2011).

• The species is assumed to experience some pressure catch, probably mainly for internal trade, since this species is rare in aviculture (Del Hoyo et al ., 1997, pit et to the ., 2016).

• Proposed changes to the Brazilian Forest Code reduce the percentage of land to a private owner is legally obliged to keep as forest (including, critically, a reduction in the width of forest buffers with perennial vapors) and include an amnesty for owners who deforested before July 2008 (That they would later be absolved of the need to reforest illegally vacated land) (Bird et to the., 2011).

• No specific conservation actions are known for this species, although part of their habitat is protected.

• Carry out surveys to estimate the size of the population.

• Study the level of Trapping threat.

• Increase the area of ​​suitable habitat that receives protection effective.

• Boost changes in laws related to deforestation and forest protection.

The Diademed Parrot in captivity:

Each captive specimen of this species which is capable of reproducing, It is placed in a well managed captive breeding program and not be sold as a pet, in order to ensure its long-term survival.