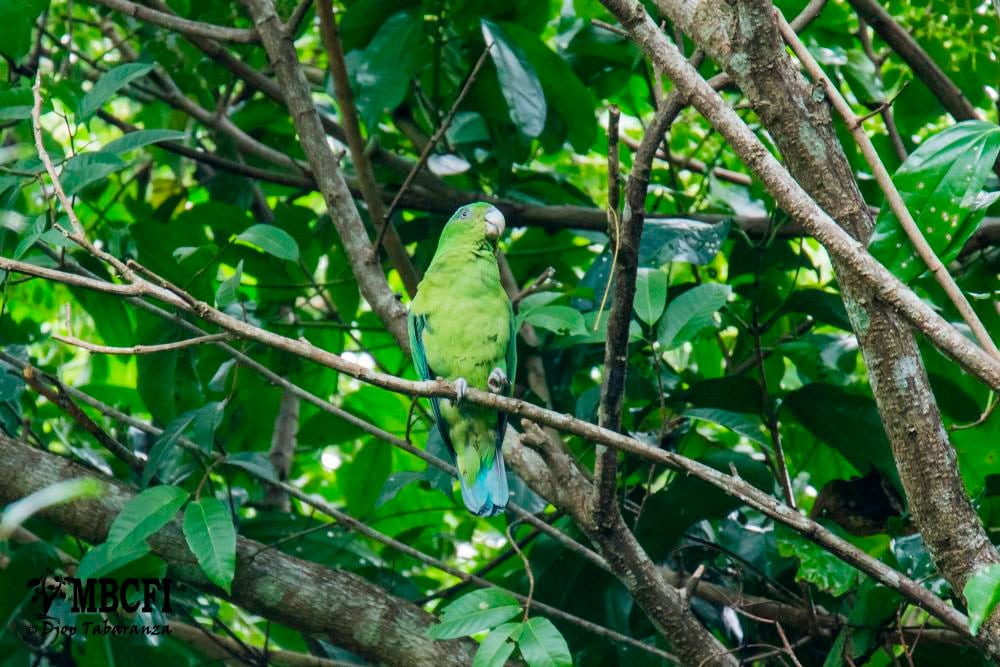 The Mindoro Racquet-tail (Prioniturus mindorensis) They are closely related to the Blue-crowned Racquet-tail but it is distinguished by the patch crown in the mindorensis It is blue with a slight violet hue and clearly defined against the forecrown green; the peak is larger and racquets are never as long as adult specimens discurus.

-similar female to female Blue-crowned Racquet-tail, but often with violet traces in the patch crown.

Formerly he considered conspecific (belonging to the same species) with the Blue-crowned Racquet-tail (Prioniturus discurus).

They can be found in moist lowland forests, most recently being observed records, in groups of birds visiting the IBA Siburan.

No information about their reproductive behavior.

Surely it feeds their congeners fruits, berries, nuts and seeds.

Endemic of the Mindoro Island in Philippines.

The population trend: In decline.

This newly divided species is listed as Vulnerable it is believed to have a small town, which infers that is in decline due to the continuous pressure of capture and loss of habitat.

It is inferred that the population of the species is continuous decrease due to the constant pressure capture and habitat loss (Juniper and Parr 1998).

Little information is available about threats to this species, but it is believed that the continuous capture for pet trade and the continuous loss of habitat through agricultural expansion, timber harvesting and development are causing a negative population trend.

No specific conservation actions for this species are known, although suitable habitat is officially protected.

Surveys to quantify the population.
Study the habitat needs of the species.
Assess the level of threat of capture pressure.
Using remote sensing techniques to track the change in land use in Mindoro.
Carry out awareness activities to reduce trapping activities.