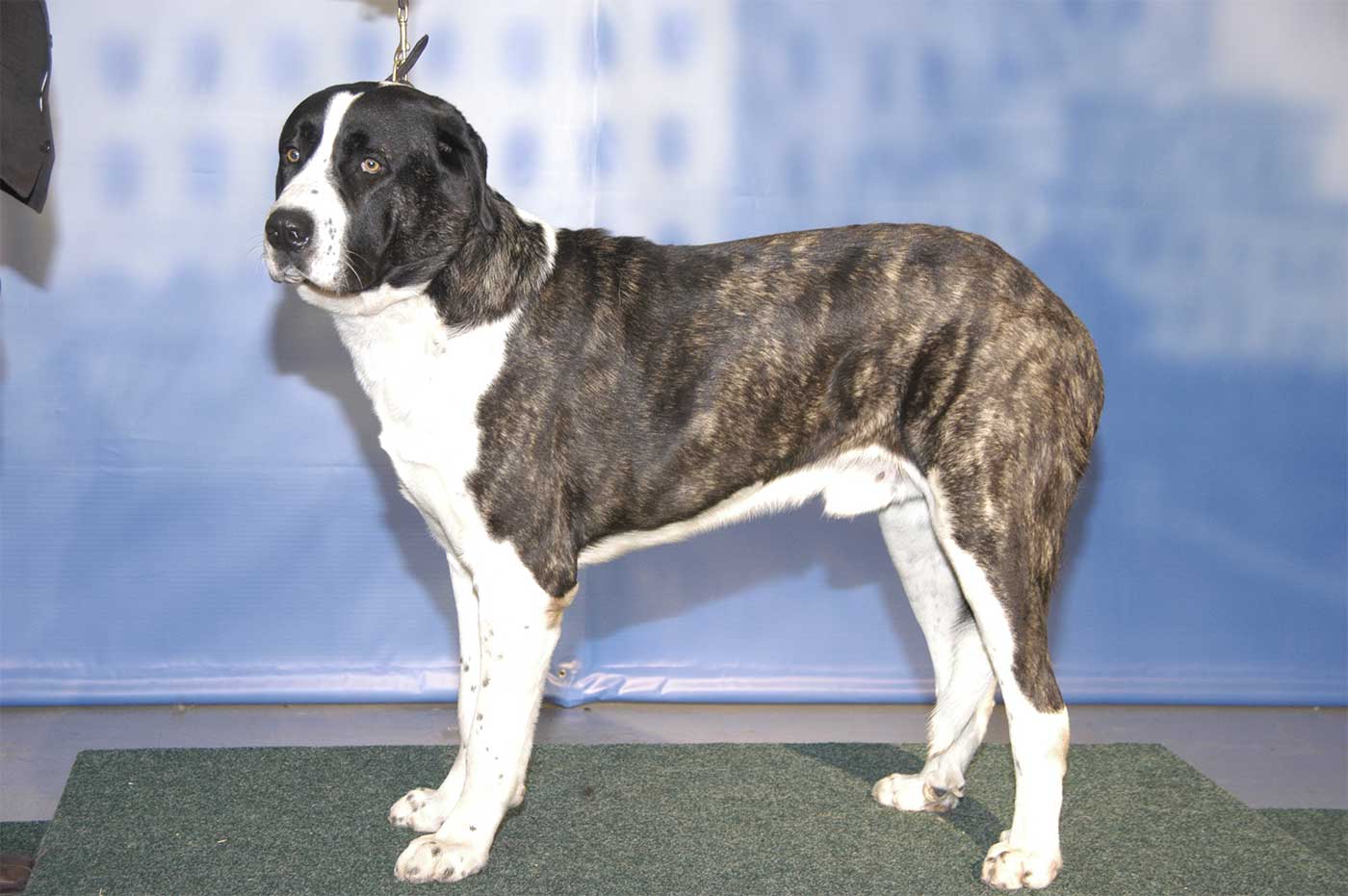 The Rafeiro of Alentejo It is an excellent watchdog in the haciendas and houses of the Alentejo.

The Rafeiro of Alentejo (Mastín del Alentejo), as its name suggests, comes from the Portuguese region of Alentejo, que se extiende al sur del río Tajo hasta el Algarve. El perro de pedigrí, that within the FCI belongs to the Group 2 (Molossoid), Mountain Dogs subsection, has a long history as a herding dog. Although little is known about the exact origin of this rare breed, their parents are supposed to be found in the molossian dogs of the Middle East. The Estrela Mountain Dog (Star Mountain Dog), also from portugal, was probably also involved in its origin.

With a height at the withers of up to 76 cm and a weight of approximately 50 kg, the Portuguese breed dog has a very striking appearance. His massive head and strong, muscular body give a defensive impression.. Look calmly at your opponent with small brown eyes, between which there is a slight groove, but nothing escapes your watchful eye.

Despite its bulky shape and somewhat heavy and slow gait, the body of the Rafeiro of Alentejo seems to be rather long than wide. The neck offers a good transition to the shoulder, the back is straight. The tail is well furnished and thickened at the base, rather low and forms a slight upward curve when excited. In rest position it reaches to the hock. Ears of the Rafeiro they are medium in size and fall to one side when folded.

The dense and smooth coat of the Portuguese Sheepdog is short to medium length and has abundant undercoat, giving you reliable protection in all weather conditions. The Rafeiro of Alentejo it is available in black, gray wolf, leonado or yellow with or without white spots. A white base color with yellow spots is also allowed., así como los ejemplares atigrados según el estándar de la raza.

At night, the Rafeiro of Alentejo he is in his best moment: nothing escapes your watchful eye, su buen olfato y sus excelentes oídos. Anyone who dares to enter their territory is captured without notice and, if required, wholesale. Pastors who have a Rafeiro they no longer have to fear rustlers or poachers.

Like a purebred dog, cuya única tarea es acompañar y proteger a su familia, the Portuguese breed dog is completely unsuitable. Although he is faithful and loyal to his family, su agudeza innata es difícil de controlar incluso con una educación consistente. After all, el inteligente y seguro de sí mismo Rafeiro of Alentejo has always been used to working and acting independently. However, the will to subordinate and obedience are not among its strong points.

Those interested in a Rafeiro of Alentejo Purebreds sometimes have to go a long way to find a suitable breeder. However, people who want to buy this dog on a whim, debería abstenerse de comprarlo. The Rafeiro it is and continues to be an excellent herd dog and should be kept in that context. Quien quiera convertirlo en un perro de compañía adecuado para la familia, no se hace ni a sí mismo ni al perro ningún favor.

Health and life expectancy of “Rafeiro of Alentejo”

Las enfermedades típicas de la raza son apenas conocidas debido a la baja propagación de la raza. The Rafeiro it is a very robust dog whose life expectancy is comparatively high, of 12 to 14 years. However, like all dogs of their size and format, You may also have joint problems such as hip joint dysplasia or elbow dysplasia.

The diet of the “Rafeiro of Alentejo”

Coexistence is important that you have with your new friend. Before considering the acquisition of a dog of the breed "Rafeiro of Alentejo" you know certain factors. Not all breeds of dogs are apt to live in an apartment, you must take into account his character, their need for exercise, their interaction with other pets, their care and if you have small children, their level of tolerance towards them.

The dog's Saint Miguel Cattle Dog It is a breed of dog Portugal, specifically the Azores Islands. With the settlement of the Azores archipelago and the beginning of the exploration of the optimal conditions of the islands for raising cattle, the need for dogs on the islands to help drive and defend livestock soon became apparent, dating from the sixteenth century the first reference to its presence, in particular on the island of São Miguel. These animals are recognized as the precursors of Saint Miguel Cattle Dog.

Although the existence of Saint Miguel Cattle Dog, as an individual race, has been recorded since the early 19th century, only in 1982 began to be registered by António José Amaral with the collaboration of Maria de Fátima Machado Mendes Cabral, veterinarian, in order to create a census of your herds. The first officially registered dog of the breed was the “Corisca”, a perfect representative of your breed.

It is also on the initiative of these same two people that, in 1984, two years after the beginning of the registration of persons the first official standard is published. In 1995 was proposed to the FCI (International Cynological Federation) and the breed was finally recognized in 2008.

The breed known today as Saint Miguel Cattle Dog descended from mastiffs and alano initially brought to the islands of the Azores by the first settlers on the continent. Later, and through contact with other people who came and settled in the Azores, the genetic heritage of the breed was enriched by crosses made with English mastiffs, bulldogs and Dogue de Bordeaux, until the culmination of the appearance of the new race, with fully defined morphological and temperamental characteristics.

In addition to those mentioned, other races may form part of the Fila de San Miguel ancestry, as the St. Humberto's Dog, also known as Bloodhound, and the Dogo Canario, a Spanish breed from the Canary Islands, but the real link – yes there is – between these races and the Sao Miguel queue not yet proven.

The Saint Miguel Cattle Dog it is characterized by being an animal of size and rustic features and characteristically longer than tall. The breed is medium in size, muscular, but without the heavy appearance of others.

The muzzle is well proportioned, apparently short, but it hides a wide mouth, with a full denture, capable of a powerful bite. The head has a solid appearance, wide and with the ears well placed on top, implanted in a strong neck that starts from a solid trunk, with a wide and deep chest. The legs are proportional to the body, being the front, as a rule, slightly separated.

The coat is strong, smooth and dense, and always striped, and it can be tawny, gray or yellow, with white mesh on the chest. Legs can also be white. The tail is implanted high, it's thick, medium length and slightly curved. It is amputated at the height of the second or third vertebra, or is it naturally short.

Race of a lively and sharp intelligence, with great ease of learning, the strength of character of the Saint Miguel Cattle Dog, coupled with a distrust of the strange instincts of all guardians by vocation, can easily be mistaken for aggressiveness, but it hides a gentle nature towards those with whom it deals closely, while remaining a tenacious and courageous guardian of those who treat him. His loyalty to his human family is extreme.

With even greater emphasis, given the dominant nature of the breed, the education and sociability of puppies must be done from birth, gradually exposing the animals to new situations and stimuli, in order to improve the development of balanced individuals capable of living with humans and other animals.

Not a suitable breed for beginners, given its dominant nature, further enhanced by his physical strength and his strongly independent and autonomous character.

Even as a pet, a Saint Miguel Cattle Dog must have the opportunity to have a task to perform. Thorough training is always a simple and effective means of strengthening the relationship between the human family and the animal, while providing the physical and mental exercise necessary for the training and development of a well-balanced animal.

However, given the intrinsic characteristics of the breed, training a copy of the Saint Miguel Cattle Dog it is a task that can be quite difficult for someone who has little experience with dogs. Being a very intelligent and dominant breed, will not respond well to the use of force. Full socialization recommended.

The sheepdog for tradition and excellence, their natural fitness for livestock can, with the right training, can be channeled into the care of horses and other small ruminants such as sheep and goats. When not channeled to grazing, the Saint Miguel Cattle Dog has already demonstrated its aptitude for big game hunting, like the boar and the deer.

Its strong and protective temperament is also valued as a self-defense dog..

Being a rustic breed, is in robust health and there are no records to date to suggest that there is any pathology to which the breed is specifically prone to for genetic reasons. The average life expectancy of this breed is calculated in 12 years.

The same hardiness that gives vigor to the breed also makes it a poorly maintained breed in a strict sense. Short, hard hair can be brushed occasionally and baths will be sporadic.. Adequate and balanced feeding will give developing puppies what they need to become healthy adults, and the same regimen will suffice to ensure adult health..