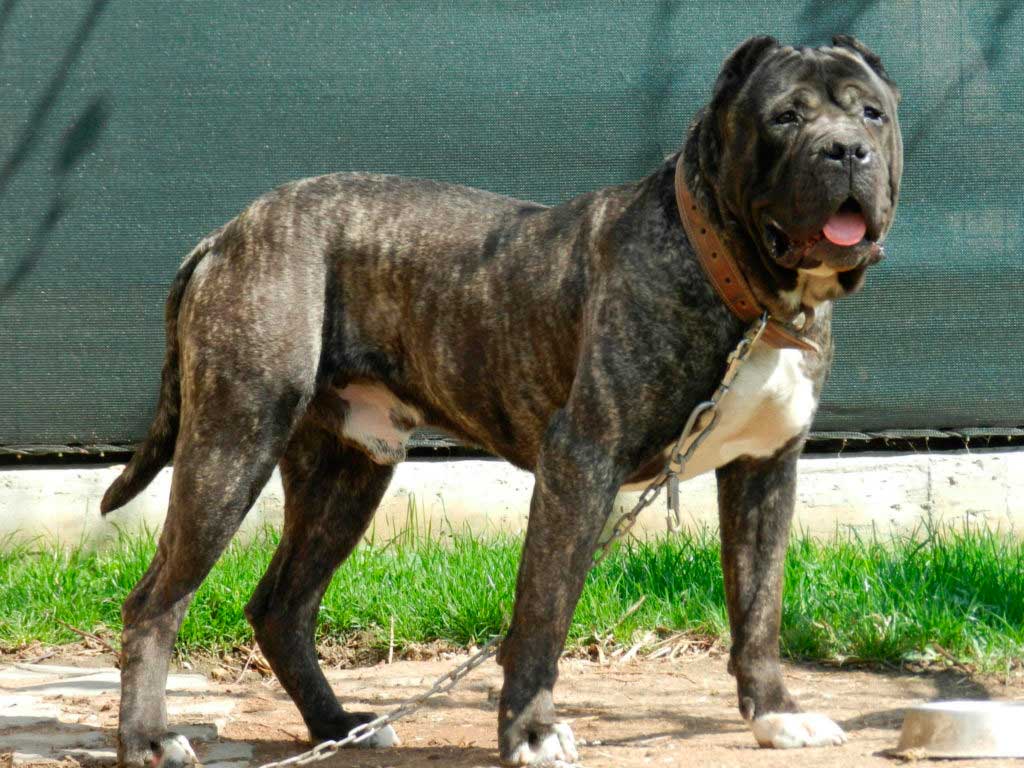 The aggressiveness of Dogo Canario should not be overly stimulated. It is an optimal guardian and defender without the need for training.

The Dogo Canario It is a classic moloso. It is the offspring of an ancient and in this ancient form it is only rarely found in Central Europe today.. It has many names: Presa Canario, Perro de Presa, Perro de Toro, Alano o Presa Canario. Dogs of the current type Dogo Canario existed still ago 200 years everywhere. They were the old saupackers, bear teethers, guard dogs, butcher dogs, the ancestors of the current great danes, bulldogs, boxers and mastiffs. They are extremely strong and bulky dogs, that even today are summarized as molossi. They were raised in ancient times and have always been highly appreciated. They were used on large farms, with livestock herds or for example on merchant ships such as guard and protection dogs, served as herding dogs and as hunting dogs for boars or bears. They served rulers like Hammurabi as war dogs, they had them carved in stone in full recognition does 3700 years.

Due to its strength, courage and determination, have been used as fighting dogs in the arenas of animal fighting since Roman times. Molossians have a commanding head with a rather short snout and long lips.. The ears are usually worn hanging. According to the traditions of antiquity in words and images, the main characteristics of the molosser have remained essentially the same for thousands of years, but in recent centuries and especially due to modern dog breeding, the classic type of molosser has been lost to some extent. In extreme cases strange shapes have been bred with many extremely short folds or snouts such as bulldogs or giants like him Great Dane or the Mastiff. The Dog is still raised in his homeland only for his performance at work.

Therefore, chances are that the Dogo Canario still embody the type Molosoide as was common in the old days. It is clearly recognized as trotting, but he does not suffer from cultivated exaggerations of any bodily characteristics or traits. You can only hope it stays that way. Unfortunately, breeders are very much at odds with Dogo Canario. They haven't even managed to agree on a name and a registry office. From 1991 has been officially considered as “The Canary Presa Dog” among the natural symbols of the Canary Islands. Meanwhile in 2001 the Spanish Ministry of Agriculture recognized these dogs as a national breed also under the name of Dogo Canario, the same dogs were then provisionally recognized as Dogo Canario by the world federation FCI in 2001 and finally in 2011. Other names are Perro de Presa y Alano. Alano It is an old word that means Great Dane.

The Dogo Canario, Perro de Presa, Perro de Toro, Alano o Presa Canario – all designations for the same four-legged friend – he is an elegant dog that radiates athletic power. He is an athletic, muscular, elongated but nevertheless typical molosser.

The skull-muzzle ratio is approximately 6:4. The upper lip rests a little flaccidly on the lower one. The eyes, medium-sized, they are oval and hazelnut, the ears, high, they are separated from each other and are shaped like a button; they are only amputated to remember their original role as a fighting dog. The neck, long and muscular, shows a slight dewlap. The tail is implanted high: thick at the base, is tuned to the extreme. The belly is retracted, but the last ribs stand out only slightly, giving a harmonious harp shape. Limbs are sturdy, muscular and perfectly plumb; angulation of the hind limbs is not very marked.

The difference between male and female bulldogs desired by the FCI standard is therefore unnaturally large. Anyway, desires of this standard for outward appearance should not be taken so seriously.

Because fortunately this originally preserved dog breed, robust and healthy has set its standard “By herself”, more exactly for their performance at work, and has kept it in the practice of life until today. People, who now wants to put it in a modern pedigree breeding dog standard, don't even agree to the principle, as we can see in its history of the breed. Modern pedigree dog breeding has not done any dog ​​breed any good, both in terms of health and character. In old times, the Bulldog fitted with pleasure to the ears, so that they protruded upwards. This is now prohibited. Today they show big ears hanging down.

The Dogo Canario is a quiet dog, balanced and self-confident. He is a powerful and defensive athlete who can show his performance at any time. Like all molossi, he is extremely kind, have strong nerves and a high stimulus threshold. However, he is more anxious to move and not as lethargic as most molossi bred today only as companions. A Dogo Canario well socialized is friendly to people who know and like children. It is very sociable. Towards strangers is at first a little distant without fear. He is an incorruptible guardian, fearless and protective of his family without being aggressive by himself. The FCI standard describes the character desired by the breed:

Calm appearance; alert look. It is especially suitable as a watchdog… His temperament is balanced and he has a lot of self-confidence. Deep barking. He is docile and kind to his family members and with strong ties to his master, but you may suspect strangers. Self-confident behavior, elegant and somewhat distant. When you are alert, his attitude is confident and alert.

It must be added that the Dogo Canario rarely barks. But if it barks once, it's pretty awesome.

The Dogo Canario is undemanding in terms of external conditions. Of course: a small apartment in the big city would not be optimal for your attitude. But other than that it's easy to maintain. It is also a working dog, a guard, a driver, a hunting dog for hunting wild boars. The Dogo Canario it is suitable as a family dog ​​only on the condition that it is well socialized, well educated and physically fit. You also have to take into account a fact: It is considered a “dangerous dog” in many countries.

The Dogo Canario can be trained well, but it's not a beginner dog yet. It is intelligent, very sociable and eager to work. But at the same time he is very powerful and assertive. In case of doubt, always the strongest end of the strap. Therefore, his master or caretaker must not leave doubts about his role as leader and this on the basis of natural authority. Then this dog will gladly leave the main role to his bipeds without reservation. But it must be filled. The Dogo Canario it is even suitable for demanding tasks such as training as an assistance or protection dog. The basic requirement is that it comes from a serious breeder and has already been socialized there.

The Dogo Canario has no special demands on your care.

Breed specific diseases are not known. Due to his still short career as an official pedigree dog, it can be assumed that the population of the Dogo Canario, Presa Dog or Presa Canario – Whatever this ancient breed of dog is called – enjoys robust health.

The Dogo Canario has no special demands on their diet.

There are no reliable figures on life expectancy. Seriously raised, the Dogo Canario I should be able to live on 10 - 12 years.

Before making a purchase, be aware that the restrictive attitude of the State can cause many problems in daily life and additional financial burdens. The Dogo Canario it is a large and powerful dog that belongs to the hands of an experienced teacher or lover. The cost of a Dogo Canario is of some 1200 EUR.

Coexistence is important that you have with your new friend. Before considering the acquisition of a dog of the breed "Dogo Canario" you know certain factors. Not all breeds of dogs are apt to live in an apartment, You must take into account their character, their need for exercise, their interaction with other pets, your care and if you have young children, their level of tolerance towards them.