Intelligent, fell, quiet and an unconditional companion. in Canada, the Airedale Terrier, used for hunting large bears and deer. 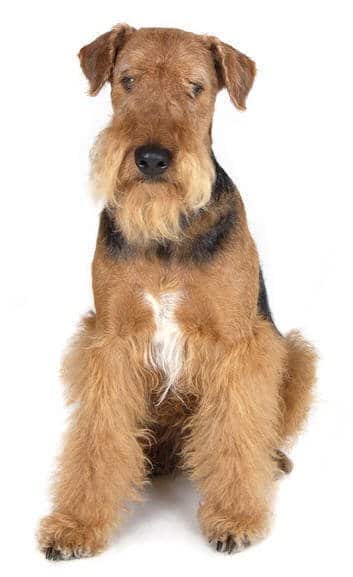 Coexistence is important that you have with your new friend. Before considering the acquisition of a dog of the breed "Airedale Terrier" you know certain factors. Not all breeds of dogs are apt to live in an apartment, you must take into account his character, their need for exercise, their interaction with other pets, their care and if you have small children, their level of tolerance towards them.

History of the Airedale Terrier

This King of the Terriers is a breed of large, strong dogs belonging to the group Terrier. It is of British origin, of the Yorkshire region. It is believed that he descended from a cross between the Otterhound, otter hunter optimal, Terrier and the Old Español. The breeding of these animals began in the mid-nineteenth century.

In the countries where it is most widespread, it has never managed to be a dog of “fashion”, so it has some protection from trade and indiscriminate breeding, factors that destroy the zootechnical characteristics of the vast majority of dog breeds.

His personality is cheerful, sometimes relied, insurance. It is almost always on alert but not aggressive, if not annoying or it urges.

The Airedale is the largest of the terrier breeds and was one of the first races trained for police work in Germany and Britain. In World War, he worked as a guard dog and messenger.

His teeth presents a quadrature and much strength to the of a Rottweiler, Despite having a thinner jaw. His coat is black and tan, varying its intensity but not the distribution, black or gray color extends to the upper neck, back, back, rump, while the flanks, thighs and belly have a mixed shade of gray hairs and golden, the rest of the body, is tan or sand in different shades.

Is from the Terriers bigger, muscular and active. His character shines through the lively and alert expression of her eyes, the way that carries its tail erect and ears. He has a lump between 59 and 61 cm in males with an average weight of 25 kg. The females among 56 and 59 cm and weighing approximately 20 kg. The eyes should never be prominent but small, dark and at an angle, with a typical expression Terrier, alert and intelligent. The ears are V-shaped, sometimes lighter or darker than the skull. Like other Terrier, traditionally a third of the tail was amputated a few days after birth. However, this practice has recently been banned in some countries.

It has a long, flat skull. Is well proportioned to the body. The well modeled muzzle should not have a concave or stop shape that descends abruptly below the line of the eyes.. The skin should be smooth, firm and tight. The upper and lower jaws are large, powerful and strong, but should not excess development. Scissor bite, that is to say, the inside of the upper incisors in contact with the outside of the lower incisors preferably set square to the jaws; but if you accept the bite in pincer. The lips are firm and black muzzle.

It is an intelligent dog, fell, quiet, a stalwart companion who enjoys going for walks and responds to basic training of simple commands with no problem.

In Canada They are used for hunting bear and deer.

They have problems with ears that require continuous observation and a lot of hygiene. They may also have skin problems, known as hot patch.

If you liked, rate this entry.
4.8/5 (9 Reviews)
Share with your friends !!
Twitter4Facebook2Pinterest
6
SHARES