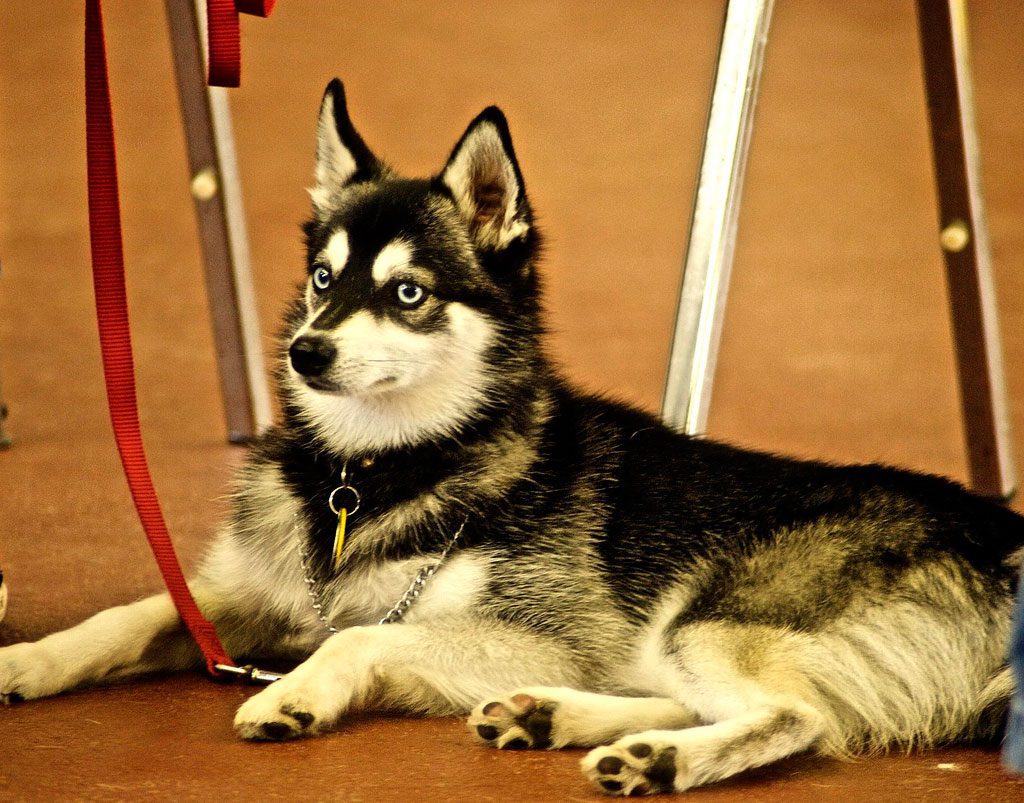 Breed of dog “Klee Kai” derived language Athabaskan, which means “small dog”. The breed was developed to create a dog miniature of the Alaska Husky (a mixed breed dog used for bobsled run), resulting in a strong intelligent dog, with a look that reflects his heritage of the North.

The breed was developed in Wasilla, Alaska, United States, in the middle of the Decade of 1970 by Linda S. Spurlin, After that she observed the result of an accidental mating of a Alaskan Husky and a small unknown dog.

The breed was developed together with the Siberian Husky, with the Schipperke and the American Eskimo, to reduce the size without dwarfism. She raised these dogs in private until released them to the public in 1988.

It was originally called “Klee Kai“, The race was consolidated with the new name Alaskan Klee Kai in the year 2002, It was officially recognized by the American Rare Breed Association (ARBA) in 1995 and by the United Kennel Club (UKC) the 1 in January of 1997.

Its weight varies between the 4,3 and 18 kg., Depending on the variety, the standard, the miniature and the Toy.

The appearance of the Alaska Klee Kai North reflects the heritage of the race.
The most distinctive feature of the breed is the facial mask, which must be clearly visible due to the contrast of colors.

The head, wedge of broad-based, It should be free of wrinkles, proportional to the size of the body.
Length snout It should be equal or slightly less than the length of the skull. The lower mandible It is strong but not outgoing. The bite scissors.

The eyes They are medium-sized and can be any color or combination of colors. The almond-shaped eyes are the most desirable.
The ears upright, triangular-shaped, extremely mobile and sensitive to sounds.

The neck It is of medium length, arched and proudly erect when the dog stands. When jogging, It extends the neck so that the head is carried slightly forward.

Seen from the front, the Paws they are straight, parallel, spaced and moderately separated.

The rump It is wide and very slightly sloping.

The hair feet It can be trimmed between the pads and around the outer edges of the feet. All the Spurs must be removed. The tail should be well furred, You can hang when the dog is relaxed or in unfamiliar situations.

It should move smoothly and effortlessly by walking, Agility inherited from their ancestors in the Arctic.

Character and aptitudes of the “Alaskan Klee Kai”:

Very curious, Active, fast, agile. His loyalty and its state of permanent alert, They make this race an excellent guard dog. They can be territorial, Despite its small size. If well affectionate with family members, It reserved and cautious with strangers and in unfamiliar situations. It is important to socialize at every opportunity to prevent rejection of the unknown.

Small dogs usually do not like people to invade your space and Alaska Kai Klee is no exception. Neither likes him they grip or tironeen, something that young children often do.

When the Alaska Kai Klee he meets a new person (a friend or your cousin who has been 100 times), side will not fail his shyness. You will need to get to the level of the dog, kneeling you and offering you the back of your hand so that you olfateé. If this goes well, That's great, You can try to scratch under the Chin, This usually they like and not what they interpreted as a threat. If this goes well, then a touch behind the ears, probably the next time that you see, already you accept as a friend.

Are pack animals, and will include human beings or other breeds of dogs as members of their herd.

It is a very brave race He will not hesitate to confront larger dogs, If you feel that a member of his herd is in danger. No dog big enough to intimidate a Alaska Kai Klee. The biggest cause of death in this breed is by fighting with other dogs and abuses in the street.

Very Smart and with lots of energy. In addition, do not mature fully unless they have around 2 years of age. Those first 2 years, the task is to keep free from boredom and therefore avoid destruction by your young pet valuables. They love to dig and chew and may annihilate in a short time the garden that you have cultivated so carefully. They are also excellent climbers and divers.

It can also be very barking, to the point of being unpleasant. They are very vocal when they have something to say and are usually very outgoing in general in such cases. If you have been out of sight during 10 minutes or several hours, You can already be prepared for some good 5-10 minutes which will put you abreast of everything what you missed, While were out of sight.