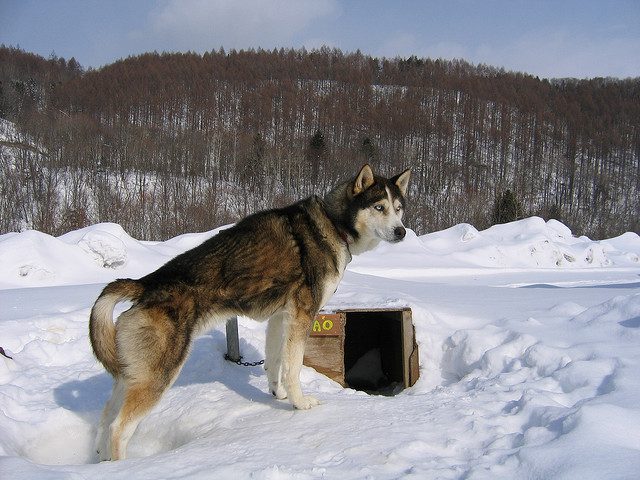 The Alaskan Husky is an athletic and generally healthy dog., specializes in sledding.

Coexistence is important that you have with your new friend. Before considering the acquisition of a dog of the breed "Alaskan Husky" you know certain factors. Not all breeds of dogs are apt to live in an apartment, you must take into account his character, their need for exercise, their interaction with other pets, their care and if you have small children, their level of tolerance towards them.

Catalogado no tanto como raza canina como un tipo o categoría de perro. No existen características fijas de pedigrí, but rather for the purpose, it is to be a very efficient sled dog.

The origin of this dog is Alaska and Canada. These fully domesticated dogs came thousands of years ago. Today, the Alaskan sled dogs They can be crossed, type Husky, or a combination of several. También varían en tamaño y constitución en función del uso del perro, to compete or work.

Most of the Alaskan Husky have pointed ears, qualifying, in fact, as spitz type dogs.

There are some specializations within this type, as the Mackenzie River Husky or the MALAMUTE, the Alaskan of Sprint as the Eurohound, or distance.

It must be borne in mind that in sledge racing championships, These dogs can come with loaded sledges to the 30 km/h y que se corre durante tres días a razón de entre 30 a 50 km daily.

The Alaskan They are valued for their toughness and resistance. They earn an average speed of 31 km/h.

This type of dogs, at least those that are used to speed racing, are of moderate size, with an average 21 a 25 kg for the males and 17 a 19 kg for the females.

The eyes They can be any color, many are blue. The eyes blues are not considered an essential feature of this race. The fur It has two layers, short hair and of medium length, Although not much, and usually less dense than pure breed of the North, the length of the shortest layer is governed by the need for an effective heat dissipation during races.

Athletic and generally, healthy. Its Life expectancy is usually between 10 a 15 years.

They tend to vary greatly in personality both in colour and appearance. However, in general terms, They are very affectionate dogs, to live with other dogs and humans.

These dogs they are not suited to a lifestyle of urban apartments, that they need a constant source of exercise, y debido a su resistencia increíble, It seems that they never tire. It is an adventurous and tends to be very quiet in the car rides. These dogs are happy to live outside or inside the home of its owners, But if he leaves out, no es recomendable si tienen un césped perfecto…, are amateur digging wells…

His hair tends to be self-cleaned just like a Mally or a Siberian Husky, which is why they need less frequent baths, In addition, they do not usually smell. They have a season of hair shedding in the spring and, Unlike in the Siberians, Malamutes or German shepherds, they may not leave large quantities of hair around the House all year round.

Nothing is impossible obstacles to this type of dogs, that they tend to go up to almost two metres away the sitting position. Si bien la natación no es su fuerte, they tend to show any resistance or fear of the water and you can train and motivate them to make them good swimmers. Usually very good vision and sense of smell, which it makes them very good hunters.

Siberian Husky runs with Bike! Springer Bike with your Dog