The Basenji is attentive, loving, energetic, curious and reserved with strangers

The Basenji It is a breed of dog originating in the Democratic Republic of the Congo. It is a primitive breed used for hunting and tracking.

They have the unique feature of not bark, but emit a curious sound-style> yodeling (Yodeling). 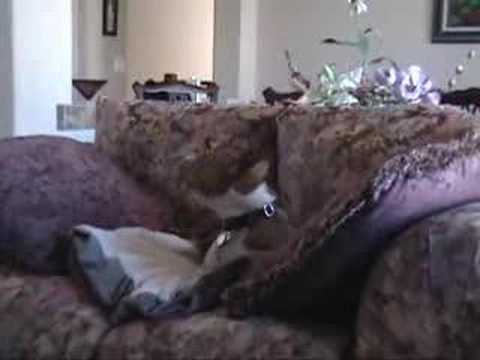 The stone Age images, as well as the tombs of ancient Egypt, already attest to the existence of this type of dog, who has survived the millennia: The Basenji is one of the oldest and most original breeds of dog. He's supposed to be a direct descendant of the Egyptian Testament – this is how dog experts call the form of a dog that has been transmitted to us through the Egyptian illustrations of the fourth millennium BC.

The Basenji comes from Central Africa, where he lived with village communities, but without having been specifically bred or formed particularly close bonds. Rather, lived like rat hunters. Often people also followed the Hunt for the Basenjis to benefit from the prey. During famines the dogs were even slaughtered.

By the way, “Basenji” translated means “little wild animal from the bushes”. As early as the late 19th century some Basenjis arrived in Europe with African explorers. However, selective breeding did not begin until 1935 in Britain. Although the dog is originally from Africa, Britain today is sponsored by the Basenji. From here the breed gradually spread to the rest of Europe. In Germany, for example, enjoyed greater popularity from the years 70 of the 20th century.

The first Basenjis were red and white, tricolor (black and white fire) and black and white. Expeditions in Zaire 1987 and 1988 They introduced 14 dogs with new bloodlines, which brought a beautiful brindle look with tiger stripes.

There are some studies which point to the Basenji as progenitor of all Terrier.

For details of the history of the Basenji —-> basenji.org

The Basenji they are a small breed, elegant appearance, they have short hair, shiny and silky. Their ears are upright, and the tail coiled lead to perfection. Some people, they believe that its appearance similar to a deer in miniature.

They usually weigh 11 kg and the port tends to be of 40,6 cm., athletic and deceptively powerful for its size. Have a walk safe and elegant like a horse to trot.

Recommended for homes with adults. But life keeps an uneasy and playful spirit, When it ends its phase of growth becomes an excellent pet.

The Basenji is alert, loving, energetic, curious and reserved with strangers. It is a little distant, but it can also form strong ties with the people and can be emotionally sticking to a particular Member of the family, generating a very strong link.

Generally does not get along well with other pets other than dogs. You like the humid climate, they tend to be very skilled soaring. It can be described as fast, playful, tireless in the game, and naughty.

One of the curiosities that presents the race, In addition to not bark, It is that sule lick is the hair to be kept clean.

Coexistence is important that you have with your new friend. Before considering the acquisition of a dog of the breed "Basenji" you know certain factors. Not all breeds of dogs are apt to live in an apartment, You must take into account their character, their need for exercise, their interaction with other pets, your care and if you have young children, their level of tolerance towards them.