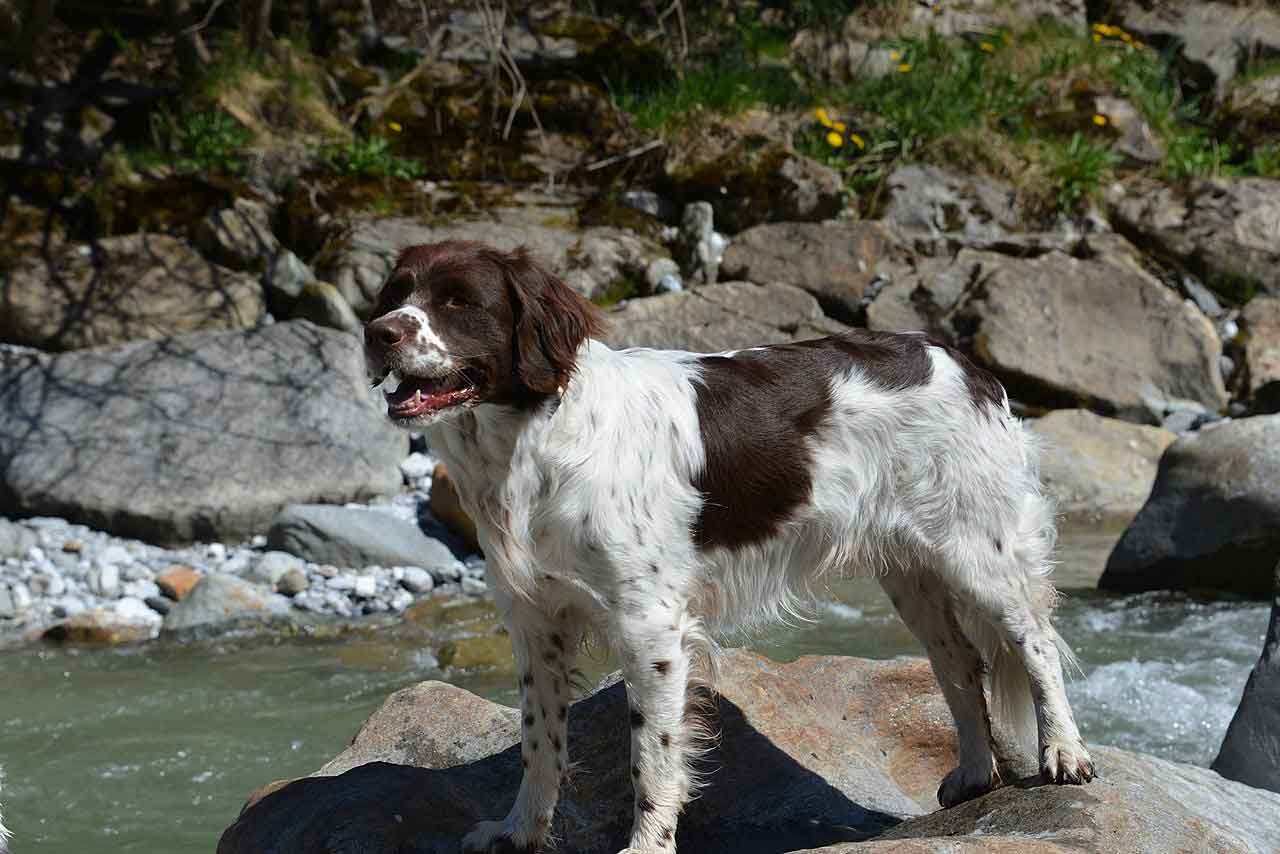 A peculiarity of Dutch Partridge Dog It consists in the fact that during the search the tail makes a rotating movement faster and faster as the dog approaches the prey.

The Dutch Partridge Dog it is an ancient canine breed, that can be found in paintings painted centuries ago.

Originaria de Drenthe, a dutch province, the breed was developed during the 16th century from dogs from Spain, what were called Spionenen or Spaniolen. In the Netherlands they were given the name Patrijshond, what does retriever mean.

In the east of the country, especially in the province of Drenthe, these dogs were bred as pure breeds, without any mix with other foreign races, as it happened in other places. This isolation allowed the Perdiguero to remain unchanged during 3 or 4 centuries.

The 15 in May of 1943, was recognized by the Raad van Beheer op Kynologish Gebied of the Netherlands, a recognition strongly encouraged by Baroness van Hardenbroek and Messrs. van Heek junior and Quartero.

The responsible breed club was founded on 5 in June of 1948, with the name of Nederlandse Vereniging of Drentsche Patrijshond.

Related to him Small Münsterländer and the French Spaniel, the Dutch Partridge Dog it is quite limited in number, and the breed is almost unknown outside its borders.

The Dutch Partridge Dog he is a well proportioned dog, with dry muscles, pure in its lines. His body reveals power and also the ability to run at the speed that suits a hunting dog. Wedge-shaped muzzle is slightly shorter than skull. The lips are quite dry and are not hanging. Her body, slightly longer than the height of the withers, is slightly elongated. Although the fur is not really long on the body, gives the impression of being so because of the well-populated ears, more abundant hair on the neck and chest, the fringes on the front and back legs and on the bushy tail, abundantly populated on all sides.

They have a dense coat that covers the body well. Not curly. The hair is not really long, but as it is longer in some parts, the dog, as a whole, gives the impression of having long hair. On the neck and chest, the hair is longer. In the ears, the hair is long and preferably wavy. The ears, the back of the front and back legs and the back of the thighs are fringed. Hair preferably wavy on the upper part of the body and tail. Except for its base, the tail is abundantly provided with long hair on all sides. These hairs are gradually shortened towards the tip.

COLOR: White fur with brown spots, mottled or not. Coats with a mix of brown and white hairs, with or without marks, are less desirable, like the cloak coats. The ears are brown, like the hair around the eyes.

They are ideal for hunting in a wide variety of terrain. They hunt with pistol shooting. Maintaining contact with the hunter is apparently an innate quality. A characteristic feature of many dogs of this breed is that, during the hunt, the tail describes a circular motion, especially when the dog is aware of the closeness of the prey. When he's close to hunting, the dog waits for the hunter to approach and when the hunter is late, turn your head to look for the game. Thanks to its adaptability, the dog is capable of hunting all kinds of animals on the plains and swamps. It is also a good retriever and excels in the search for lost game.. These characteristics are innate. For this reason, does not require long training.

The Dutch Partridge Dog it is also a very good companion dog because it is faithful, friendly, attentive. Your education should be done smoothly, without aggressiveness or too much firmness.
This dog requires regular maintenance. It will be an accomplice of the children and it is possible to leave them together. under surveillance, of course. Apartment living will get you down, he needs to have at least one garden for him. to let off steam and also for daily walks.

The Dutch Partridge Dog he is a robust dog, but can be injured while hunting (fracture, sprain, tendinitis, wound…). His ears are drooping, poorly ventilated, prone to ear infections. Some dogs may be affected by hip-femoral dysplasia, a malformation of the hips that causes lameness and pain.

The Dutch Partridge Dog should be brushed once a week to remove dead hairs and dirt. You can bathe once a month with a suitable shampoo.

Inspect and clean floppy ears once a week. When we come back from the hunt, we will check that he is not injured. Good antiparasitic and vacation coverage will be launched.

Coexistence is important that you have with your new friend. Before considering the acquisition of a dog of the breed “Dutch Partridge Dog” you know certain factors. Not all breeds of dogs are apt to live in an apartment, You must take into account their character, their need for exercise, their interaction with other pets, your care and if you have young children, their level of tolerance towards them.