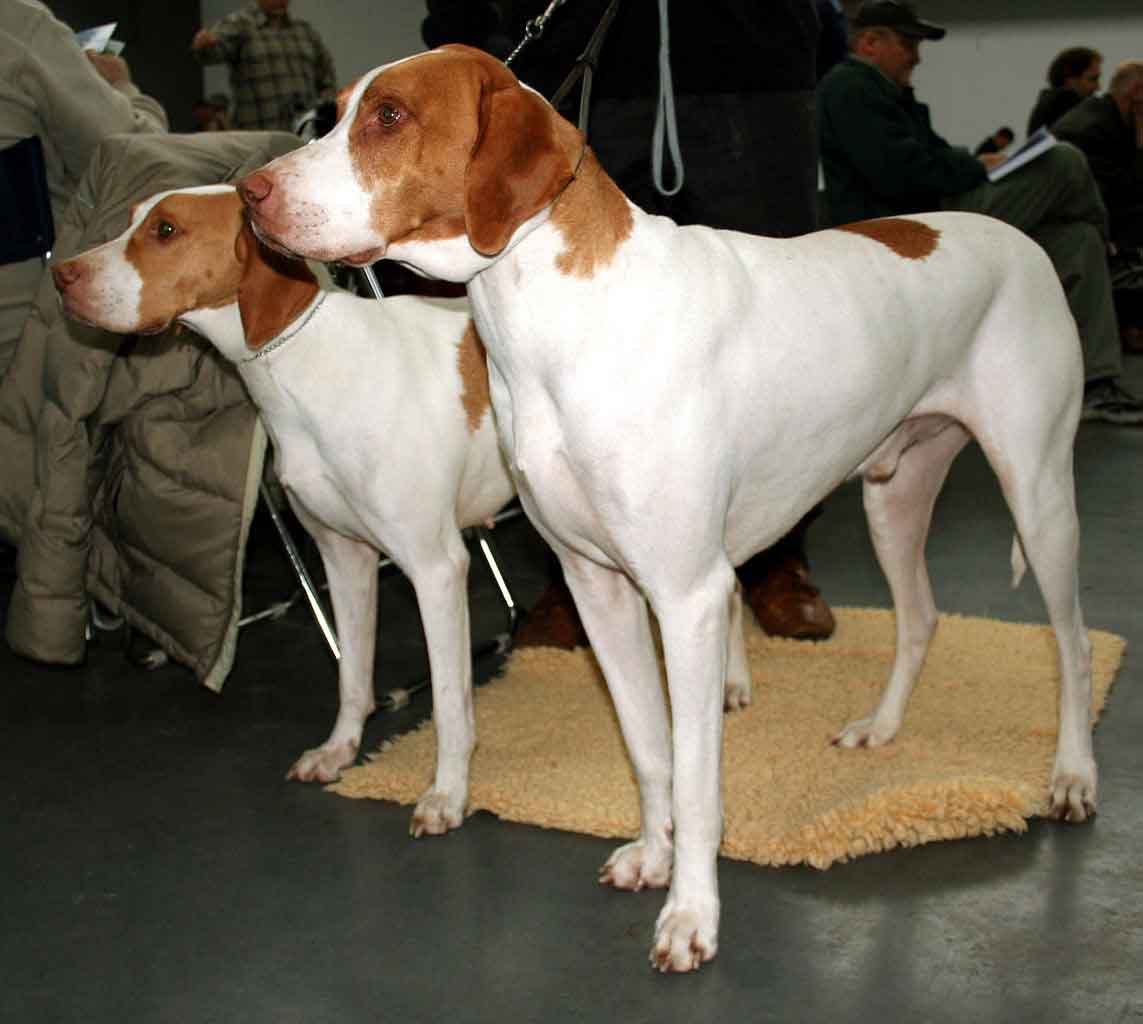 The Saint Germain Pointer it is little known outside the French borders.

A versatile hunting dog that has been used not only for aiming, but also to throw and recover, the Saint Germain Pointer can work with a variety of hunting, including rabbits and pheasants. Unlike most hunting dogs, traditionally, this breed has been popular at shows and has been bred to have a very uniform and specific appearance.

Originally bred in France mixing English pointer with the French Pointing Dog - Gascogne type, larger size, This breed is believed to have developed in the early 1830 and claims to have a very elegant heritage. King Charles X of France was given two dogs English pointer who were very talented hunters. The female, call miss, she was raised with a dog Braque Francais local, and the legacy of Saint Germain Pointer started. Initially, the breed was called Compiegne Pointers due to the location of the kennels in which they were raised, but this name was later altered when the kennels were moved to the region of Saint Germain. Many of the dogs produced were shown at dog shows throughout France and, at that time, they were the race of Pointer most displayed in her native country.

The race Saint Germain Pointer was initially very popular and in 1913 a club was formed that aimed to increase its prevalence in France, as well as improve the breed. Unfortunately, the size of the breed's population Saint Germain Pointer was greatly reduced in every world war. They have never fully recovered from the drastic decline in population size that occurred in the first half of the 20th century., but they are still a breed that has a loyal follower and are not in danger of extinction today.

En los últimos años, the English pointer enter the genetic pool of Saint Germain Pointer to increase their numbers and add some genetic diversity. Even though few, if there is any, of the breed members have been exported internationally, the UKC granted full recognition to the breed in 2006 within your group of hunting dogs.

Photo: Braque_saint-germain at the World Dog Show in Poznań by Pleple2000, CC BY-SA 3.0, via Wikimedia Commons

The appearance of Saint Germain Pointer is particularly important for breeders, although it is mainly a hunting dog. Historically, have participated in a large number of French dog shows. Breed members must be of medium build, with good muscles and heavy bones. The dog's skull should be round and the same length as its muzzle.

Your pink nose should have wide open nostrils, while your big golden eyes should show a placid and relaxed expression. Their ears are curved at the tip and should not reach beyond eye level. The shoulders of the Saint Germain Pointer they are impressively long and their limbs must be robust and heavy. They have a broad chest and a straight back, although your rump will bow slightly. The dog's sharp tail is carried at a distinctive horizontal angle when in motion.

The short coat of the Saint Germain Pointer should be faded white with orange markings, and the ears are preferred to be orange everywhere. Unlike in the English pointer, black hair is not tolerated. The males measure between 56 and 62 height cm, while the smaller females reach heights between 53 and 60 cm.. Most members of the breed will weigh between 18 and 27 kg.

While it is true that Saint Germain Pointer has traditionally excelled on the show floor, is primarily a hunting dog and, as such, has the character expected of a working animal. This breed is easy to train and loves to be kept active and given a task to do. They must have a “soft mouth”, meaning they do not hurt or harm the prey they retrieve. They also tend to work in packs, which means that they normally get along with other dogs. Although it is undeniable that they have a natural instinct to chase small animals, anecdotally they get along well with the small pets in their house that they have been introduced to since childhood.

The Saint Germain Pointer he is truly a family dog ​​and does best when kept indoors with human company. He is particularly affectionate towards those he trusts and will bond closely with each member of his family. They are not typically a breed that displays any aggression, which means they are adapted to children, though they wouldn't be good watchdogs. While it is true that this breed will be willing to befriend any child it meets, Caution is advised with very young children who may not be able to resist brisk greetings and rowdy play!

More than many other dog breeds, the Saint Germain Pointer can be a real treat to train. He is a dog willing to please his master and has the intelligence to complete most of the tasks entrusted to him with relative ease.. Trainers will be most successful when they focus on the breed's most natural behaviors, like recovery.

It is often said that the Saint Germain Pointer it is a hardy dog ​​that is much less sensitive than other closely related breeds. Trainers have the option of using firmer methods than they might expect, However, will continue to achieve the best results with the use of positive reinforcement techniques (instead of negatives).

Not far behind when it comes to exercise, the Saint Germain Pointer is a dog that loves to be out of the house. Has great endurance when working and is able to travel long distances for long periods of time without seeming to tire. If kept solely as a companion animal, owners should be able to provide an hour or two of solid exercise each day and should also keep the dog stimulated with various games and training sessions.

Any attempt to keep this breed in a small apartment or house or to exercise it for less time than recommended, will likely lead to a frustrated dog that will become a difficult pet. Anxiety is likely to develop in these situations, hyperactivity and destructive behaviors.

Unfortunately, there is no specific information on the health of the Saint Germain Pointer, and to date there have been no studies on the breed. A working dog, it is generally accepted as a hardy breed. The prudent owner would be aware of these possible health conditions:

Hip scoring should be performed by responsible breeders to ensure that the small population of the Saint Germain Pointer stay healthy. A simple x-ray of the hips will allow a vet to assess the quality of the hip joints and inform the breeder if they are good enough to allow breeding.

When the ear canal becomes clogged with a buildup of smelly debris, an infection is likely present. Ears may also be red, hot and sensitive. Affected dogs tend to shake their heads and rub their faces against the ground. Infections occur mainly due to the proliferation of bacteria and yeast, although they can also be due to a foreign body, like a grass seed inside the ear canal or ear mites.

The short coat of the Saint Germain Pointer does not need to be brushed more than once or twice a week. Toenails may need to be trimmed every few months, particularly if you don't walk on hard surfaces. The breed's clear claws make claw clipping easy, since the cut is visible, making it more avoidable than in dogs with dark pigmented claws.

The Most Important Grooming Duty An Owner Should Not Neglect, is the maintenance of good ear hygiene. The ears should be cleaned every one to two weeks with a dog ear cleaner. Owners should also ensure that the ears are dry inside and out after being exposed to water..

Coexistence is important that you have with your new friend. Before considering the acquisition of a dog of the breed “Saint Germain Pointer” you know certain factors. Not all breeds of dogs are apt to live in an apartment, You must take into account their character, their need for exercise, their interaction with other pets, your care and if you have young children, their level of tolerance towards them.