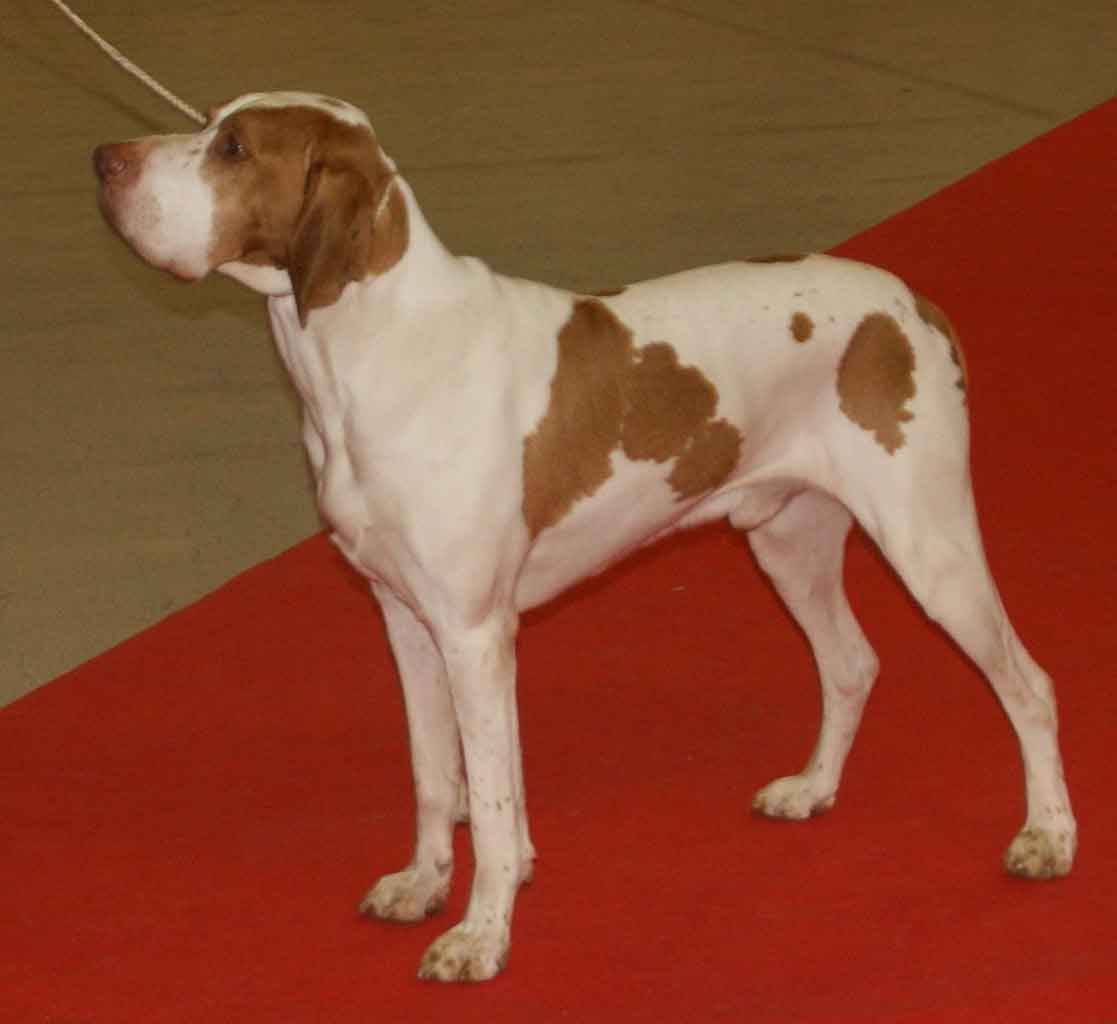 The Ariège Pointer it is a quiet breed of dog, although sometimes stubborn, which is common among hunting dogs.

The Ariège Pointer is a French dog breed that comes from, as its name implies, from the department of Ariège, located on the Franco-Spanish border.

There are different theories about its origins.. However, the most common theory is that it descends from the ancient French Pointer, that was crossed in the 19th century with Braques of southern stock, with white and orange coats to give it more lightness and activity.

What's more, looks a lot like the white and orange dogs painted in Jean-Baptiste Oudry's paintings (1686-1755), famous for his paintings of hunting scenes. Therefore, It does not seem illogical that cynologists have attributed this dog to him as an ancestor.

Despite its official recognition by the F.C.I. (International Cynological Federation) in 1955, the second half of the twentieth century was almost fatal for the Ariège Pointer. However, some Ariège hunters continued to use it, which prevented the breed from completely disappearing.

In 1989, a team of fans of the breed decided to dedicate themselves to its survival, after having noticed that there was no more Ariège Pointer registered in the LOF (Libro de los Orígenes Franceses) from 1964.

The Club du Braque de l’Ariège was thus created the following year, with the mission of contributing to the safeguarding and promotion of this breed, but also to centralize all the information that makes it possible to identify the specimens that would be found in France in the breeders, hunters or other fans of this dog.

The operation was generally a success. Like this, the increase in births meant that in 1999, less than 10 years later, the symbolic milestone of the 50 Ariège Pointer listed in TFO. The trend has continued, since today there are more than 350 specimens in the LOF, many of whom have won prizes in beauty or hunting contests.

However, the breed has spread relatively little outside its homeland, since most breeders and owners of the Ariège Pointer are located in the south-west of France, although there are also some scattered throughout the rest of the country.

Internationally, the Ariège Pointer was officially recognized in 2006 by the UKC (United Kennel Club), one of the leading canine organizations in the United States. However, the UKC is an exception, since the other large national canine organizations do not yet recognize the breed. It's still very difficult, yes not impossible, acquire a Ariège Pointer outside france.

Vigorous and powerful, the Ariège Pointer has a certain elegance. His musculature is prominent and harmonious, and its well drawn lines.

Usually pale orange or brown fawn in color, there are also speckled white and trout. His great characteristic is that the color of his nose is more often in harmony with that of his fur..

His hair is short and shiny and his head is long, angulosa, without a very pronounced stop.

His tail is low and long, in contrast to his ears, that are thin and well placed above the eye line.

Finally, the eyes of the Ariège Pointer they are oval shaped, dark amber or brown. Her frank and gentle eyes will easily seduce humans who cross her path.

The Ariège Pointer it is a quiet breed of dog, although sometimes stubborn, which is common among hunting dogs. He is also a very intelligent dog.

The Ariège Pointer it is also very resistant and adapts easily to all weather situations, though still more at home in the cold than in the tropics.

Very sensitive and affectionate with his master and his relatives, is docile, Gentile, easy to train, and therefore it is an excellent pet.

May be in contact with other animals, in any case congeners or other species of the same size, especially if you've gotten used to them from a young age as part of puppy socialization. On the other hand, its innate hunting instinct could lead it to attack small potential prey. Therefore, it is better to avoid sharing your daily life with a rabbit, a rat or other game that awakens their deep stalker nature.

It is also for this reason that it is recommended to keep it on a leash when in town. On the other hand, if your education is not lacking, it's conceivable – and even desirable – let it go when in the field, so it can be spent, as this is necessary for their physical and psychological well-being.

In effect, the Ariège Pointer remains a lively, independent dog who needs daily exercise and is happy to take part in long walks or bike rides. It is a recommended breed of dog for an athletic owner, since you can't settle for a few relatively short outings to relieve yourself.

They can live in the city, but only if they have a garden. The latter does not make it less necessary to offer him long walks, all days, ideally in the middle of nature. What's more, if you live in the city, it is advisable to accustom it from a young age to crowds and traffic, for example to avoid encountering a dog that runs behind cars.

The Ariège Pointer has an innate aptitude for hunting, but he still deserves to be educated as soon as possible to consolidate his knowledge and teach him the fundamental commands of hunting (stop, stand up, report…).

Whether it is intended to be used as a working dog or simply as a companion dog, it is recommended to train it with patience and delicacy, since it is endowed with great sensitivity. If you don't, you risk getting upset and discouraged, and restoring trust between the owner and his animal is then a long and arduous task.

In any case, either during your education or at any time after, the owner must be calm, attentive and balanced to curb the very dynamic burning of your partner.

The Ariège Pointer he is a robust dog with an iron constitution and no particular pathology.

A weekly brushing of the dog's coat is sufficient, since the Ariège Pointer does not need much maintenance.

Having said that, like any hunting dog, the dog's ears should be systematically cleaned when he returns home, in order to remove any leaves or dirt that may have lodged there.

This special attention to its ears is also valid if it is only used as a companion dog., since dog breeds with floppy ears are at higher risk of ear problems.

The price of a puppy Ariège Pointer in a hatchery is between 600 and 800 EUR. There is generally no price difference between a male and a female.

Coexistence is important that you have with your new friend. Before considering the acquisition of a dog of the breed "Ariège Pointer" you know certain factors. Not all breeds of dogs are apt to live in an apartment, you must take into account his character, their need for exercise, their interaction with other pets, their care and if you have small children, their level of tolerance towards them.

If you liked, rate this entry.
5/5 (2 Reviews)
Share with your friends !!
Twitter13Facebook2Pinterest
15
SHARES