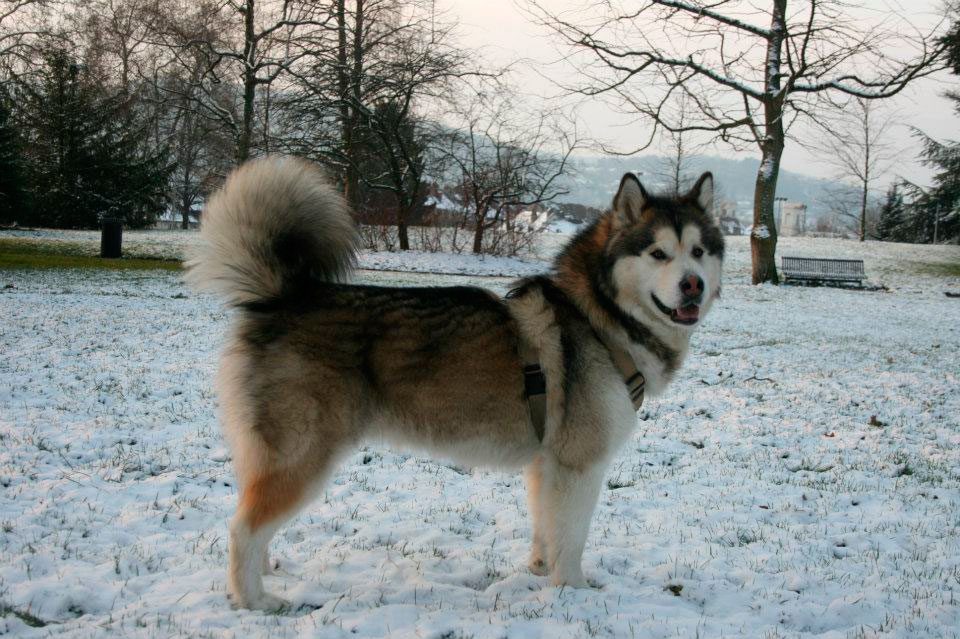 Also called Mally. It is native to the Arctic dog, and one of the oldest breeds within the sledge dogs.

Raised by a tribe of Inuit call mahlemiut. The meaning of the word mahle It is unknown, but it is known that mouse means “town of”. Mahlemiut as Mahle people can therefore be interpreted. Following the English phonetics, diction is then transformed into MALAMUTE.

The area inhabited by the people of the MALAMUTE were the banks of Kotzebue Sound, a territory between two large rivers: the Kobuk and the Noatak. Men and women of the tribe mahlemiut (MALAMUTE) They were highly prized among others Inuit tribes for their courage, his pride and his skill in hunting and fishing.

These dogs were famous for their beauty and characteristics of strength and endurance, they did of them optimal elements for shooting.

They were, in general, larger and more powerful than the other Nordic dogs, with similar in appearance to the Wolf and large and soft tails carried on the back. Contemporary witnesses tell it between 1870 and 1880 approximately, the caribou, for unexplained reasons, They changed their usual migration routes and taking away the Malamute tribes an important source of livelihood.

Its ability to carry heavy loads it is revealed when he is chosen for expeditions to the Arctic Circle, as the two who placed the Admiral Byrd. They were also used as a rescue of injured dog in World War II.

Its height and weight normal vary 60-65 cm. on the cross and 35-40 kg for males, and 55-60 cm and 30-35 kg for females. It has two layers hair: an external, thick and rough, and an internal feel oily and woolly, and it is longer in the area of the neck and shoulders, on the back and the tail. Its color It is predominantly gray but colors ranging from white to reddish sand allowed.

Their ears they are triangular, always in tip, medium-sized. The eyes They are alive, on alert, medium-sized and almendrada form.

The Alaskan Malamute is a big dog with hair mantle that characterizes him, You can give the impression of being a “shielded” among the dogs.

In contrast to other races, When it gets wet is not drastically reduced its size.

There are different colors in the Alaskan Malamute, Black with white, coffee, reddish and recently found a color of white Malamute. The history of this color is equal to of the Siberian Husky; they are white to camouflage in the snow and thus be able to catch prey.

It is a sled dog with ancient origins, little changed from its origin Wolf. This does not mean that it is aggressive. While his appearance and pride can impress the external observer, It's a playful animal (When you are invited to do so), faithful to his master and a great protective instinct with children.

It is a dog outside, She loves the outdoors and is happy to live in the open air; If locks it after a fence, It is very likely that finding the way to escape, because likes freedom and not lose a chance to go in search of an adventure or a career.

Shyness is usually not a good sign, but fortunately, seems to be a pretty rare feature in this race and if it occurs it may be due to causes outside of the animal genetics and having been produced by an owner who has failed to give a proper socialization, keeping it locked and devoid of psychic stimuli, interaction with the same kind and a very limited human contact. If it detects, It should be monitored and provide training to overcome the problem, that otherwise his behavior may become unpredictable and therefore dangerous.

On the other hand, given the way of Eskimo and nomadic life share everything, is not a race of protection, but it can be a good Dog Alert, It will notify the owner that he sees something strange, with the so particular sound it emits, It is a combination between howl and bark.

It is not a dog to guard and defense than by nature tend to be friendly with humans.

As a result of his former life, It is a dog with strong herd instinct and hierarchy, which results in frequent attacks with other animals. In addition, males are very territorial and competitive among themselves so it is not advisable to accommodate them together. Females may be easier to train and better adapted to living in houses. This race like the company human, has huge doses of loyalty, love and willingness to work, What makes a good dog home.

It is affectionate with children, even with strangers, and he loves to accompany them on all sides. Because of its independent character is reputed to be stubborn and difficult to train among people who do not know. However, There are Malamutes champions working with blind obedience.

They are sensitive, affectionate and playful, but they know to protect themselves effectively. With a good training and socialization are balanced dogs, both physically and psychologically, because they have good potential for learning because they are quick to learn and acute reflexes.

Coexistence is important that you have with your new friend. Plantearte before acquiring a dog race “Alaskan Malamute” you know certain factors. Not all breeds of dogs are apt to live in an apartment, You must take into account their character, their need for exercise, their interaction with other pets, your care and if you have young children, their level of tolerance towards them. The Mastín Americano He was raised to be a family dog, they attest to this character and temperament

The Mastín Americano "is a breed dog trotting kind that was developed over many years of selective breeding by Fredericka Wagner of"Flying W Farms” (Kennel dedicated to the race), in Piketon, Ohio, ago 20 or 25 years (the truth is that me I burned eyelashes looking for date exacta… and I have not given her).

The objective was to develop a dog that had the size, temperament, the provision, and the appearance of the Mastiff breed, but with fewer health problems and did not lose as much saliva as other varieties of dog Mastiff, and that life expectancy was greater. The Japanese Mastiff is quiet, serene, worthy and extraordinarily peaceful.

The Japanese Mastiff (Tosa Inu) It is a breed of dog originating in Japan. Molosser imposing aspect, It is one of the favorite breeds for the lovers of dogs large size around the world. The breed emerged in the mid-19th century, When crossing various European breeds of large size (Great Dane, Mastiff, San Bernardo, Bulldog, German Shorthaired) with the native Shikoku Inu.

Read all about the race by clicking on: Tosa Inu. The Italian Mastiff It is a versatile and balanced dog that can adapt to all.

Something small and elegant that the Neapolitan Mastiff, the Italian Mastiff (or Cane Corso) It was used in the past not only as dog Boyero but also in the hunt for wild boar, and as dog escort on long journeys of traders and, even, as a grip of Bull Dog.

Read all about the race, by clicking on: Cane Corso. The Cuban Mastiff It was very notable and renowned for their ferocity. Extinct race.

The Cuban Mastiff or Cuban Dogo, It is a breed of dog of Cuba that has been terminated. It was very similar to the Bullmastiff. This breed of dog was used for dog fighting.

This breed of dog was introduced in Cuba to capture fugitive slaves (Maroons). After the abolition of slavery became an animal too expensive to feed, and so was, the race ceased to exist with the time. The Bordeaux Mastiff It is very faithful to its owner and loving with children.

The Bordeaux Mastiff (Bordeaux Mastiff) is of French origin, It is part of the great family of the Mastiffs that still medium size turns out to be a dog of great strength and power, as a firm and determined to make it a great guard dog.

It is one of the most ancient French breeds, coming from the Eastern mastiffs arrived in Europe with the barbarian hordes. In more recent times, other races have contributed to the definition of this: the Mastiff, the English Bulldog, and the German Dogue.

Read all about the race by clicking on: Bordeaux Mastiff. The South African Mastiff He is known for his bravery, his intelligence and his great resistance.

The South African Mastiff (or Boerboel) It is a dog breed of molosser South Africa, comes mainly from the junction between the Bullmastiff, Great Dane and the now extinct, Bullenbeisser.

This is a very suitable for the guard race, self defense and heavy work. Early examples date back to the year 1600.

Read all about the race by clicking on: Boerboel. The Danish Mastiff is calm, with good temperament and friendly.

The Danish Mastiff (or Broholmer) It is a breed of molosser type dog, originally from Denmark.

It is a dog of Doge of large size type, rectangular and strong Constitution; its motion is regular and energetic. His appearance is dominated by the powerful forelimbs.

The head is broad and solid; strong neck with some loose skin, and the chest wide and deep.

Read all about the race by clicking on: Broholmer.