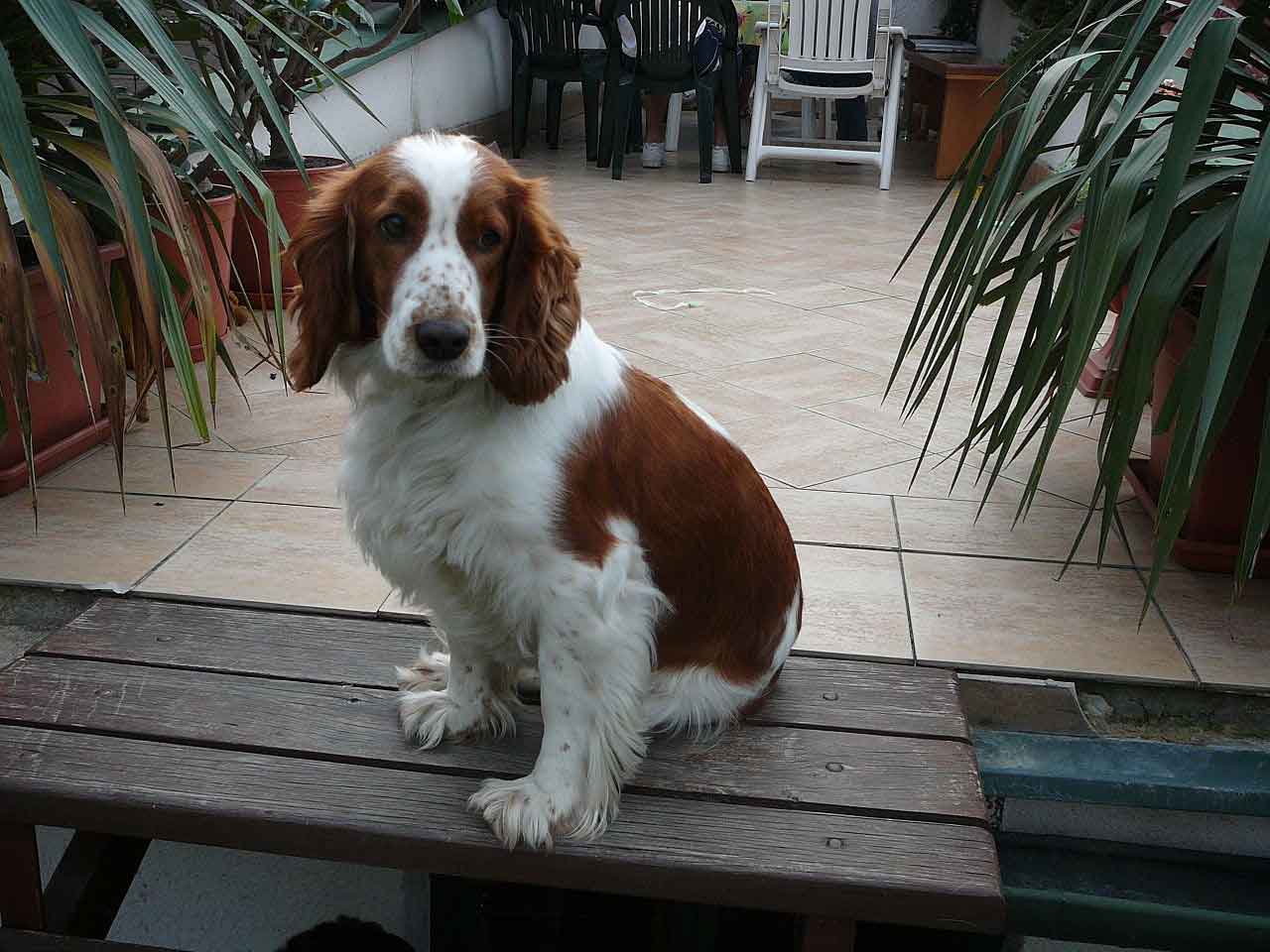 The Welsh Springer Spaniel tends to be quite shy, and for that reason he needs a good socialization when he is a puppy.

Little is known about the origins of Welsh Springer Spaniel, but it is considered a very old breed, whose ancestors date back to Roman Britain. Renaissance tapestries show spaniels that look a lot like today's Welsh Springer; similar red and white Spaniels appear in some 18th century portraits. In the 19th century, dogs were little known, except in the Neath Valley region, in south wales.

The preponderance of dog shows at the end of the 19th century led to a renewed interest in the breed, who made his appearance at the first Kennel Club show, held in 1873. It was judged alongside the black and white Spaniel and the Welsh Springer Spaniel white. With the time, the two races parted.

For a long time he was mistaken for the English Cocker Spaniel and was not recognized until 1902.

It is an ancient race of pure origin, which was used for a time as a herding dog. Thanks to its enormous adaptability, the Welsh Springer Spaniel It is also an excellent companion dog..

The Welsh Springer Spaniel differs from his cousin, the English Springer Spaniel, by a flowing red and white coat, a somewhat more relaxed personality and a slightly smaller size that ranges between 15 and 20 Kg.

With its moderate size, can be a good option for households with children: the Welsh Springer Spaniel not big enough to accidentally harm little ones, and he's not small enough to risk being hurt by overly enthusiastic kids.

The Welsh Springer Spaniel is loving, Intelligent, quick to learn and usually good at remembering what you have learned. Compared to many other Spaniels, he is protector of his family and his property, and prone to barking at anything that catches his eye. The Welsh Springer Spaniel can become very attached to his people, but a second dog can help you give an additional outlet to your affection.

However, with strangers, tends to be a reserved dog. No tiende a ser tímido o antipático, but it takes time to get comfortable with new people. Children and other pets see your friendly side, especialmente cuando se cría con ellos. But keep in mind that a Welsh Springer Spaniel boisterous may unintentionally knock over a young child, así que supervise siempre el juego con los niños pequeños.

In the countryside, the Welsh Springer Spaniel he is a great worker able to function in any terrain, y está más que feliz de estar al aire libre todo el día, always staying close to his hunter. Its olfactory ability is excellent and it can hunt any type of game. If you live with a non-hunter family, two or three long walks a day will also satisfy your exercise needs.

Regarding training, opt for accolades, not by force. Although it may be stubborn, the Welsh Springer Spaniel responds well to constant training and rewards. Planee empezar a entrenar a su cachorro el día que lo traiga a casa. It is able to absorb everything you teach it even at seven to eight weeks of age.. One Welsh Springer Spaniel young man will test him to see what he can do, así que intente llevarlo a la clase de jardín de infancia para cachorros cuando tenga 12 weeks, and socializes, socialice, socialice. However, note that many puppy training classes require that certain vaccinations (such as kennel cough) stay up to date, y muchos veterinarios recomiendan limitar la exposición a otros perros y a lugares públicos hasta que se hayan completado las vacunas de los cachorros (including rabies, distemper and parvovirus). Instead of formal training, you can start house training your puppy and socialize with family and friends until puppy vaccinations are completed.

The Welsh Springer Spaniel are predisposed to some diseases, such as hip and elbow dysplasia, hypothyroidism and eye diseases such as entropion, glaucoma, progressive retinal atrophy and inherited cataracts.

Not all of these diseases are detectable in a growing puppy, y puede ser difícil predecir si un animal estará libre de estos males, so you should find a trusted breeder who is committed to raising the healthiest animals possible. Debería poder presentar un certificado independiente de que los padres del perro (and grandparents, etc.) have been screened for these defects and considered healthy for breeding. That's where health records come in..

Los criadores cuidadosos examinan a sus perros en busca de enfermedades genéticas y sólo crían a los ejemplares de mejor aspecto, but sometimes mother nature has other ideas and a puppy can develop one of these diseases. In most cases, can still have a good life, thanks to advances in veterinary medicine. Y recuerde que usted tiene el poder de proteger a su Welsh Springer Spaniel one of the most common health problems: the obesity. Keeping it at a suitable weight is a simple way to extend the life of your pet.

The Welsh Springer Spaniel has a smooth, silky coat that needs to be brushed and combed at least twice a week - and every time he returns from hunting- to avoid entanglement. Las mejores herramientas para esta tarea son un cepillo de púas y un peine de acero inoxidable. Brush the fur on the paws, the body and ears with the brush to remove dead hairs and use the comb for the rest of the body. You should also ask your breeder to show you how to do detailed trimming with razor and scissors to achieve a neat look..

Coexistence is important that you have with your new friend. Before considering the acquisition of a dog of the breed "Welsh Springer Spaniel" you know certain factors. Not all breeds of dogs are apt to live in an apartment, you must take into account his character, their need for exercise, their interaction with other pets, their care and if you have small children, their level of tolerance towards them.