The Billy, It is a dog from France created at the end of the 19th century from the junction of three races that are now extinct: the Larye, the Céris and the Montembœuf. The cross much cared to highlight features such as: good smell, resistance and fast reflexes.

Billy, Historically, was used for the hunting hares horse, wild boars and Roe deer. In the news, There are few copies and is appreciated, is not very common to see them.

Billy has the exact appearance of the famous white dogs that were part of the packs of the French aristocracy (16th centuries, 17TH and 17TH). History tells that King Charles IX of France (1550-1574) He had a white female who wanted more than to his own life. When the dog died, He forced the Court to go into mourning.

He was the Lord of Montembœuf who, fixed a race which took its name (one of the ancestors of the Billy). Successively Hublot du Rivault formed a large Pack of dogs Céris, created by namesake Mr Céris, crossing small dogs from Switzerland - coated white and orange- with the King's surviving white dogs. Last but not least, the own Hublot du Rivault crossing a Poitevin-Larye male with some Céris females and then crossing, the resulting copies with a Stallion Montaimboeuf, He got dogs with white and orange layer, that is the parent of the current Billy. Towards the end of the 19th century, the race was definitely fixed bearing these dogs in France, a rapid dissemination, to the extent of forming packs quite numerous

Billy is a trace of relatively large size dog, smooth-coated, exceptional Hunter, endowed with great smell, optimal resistance and good speed, It is used in hunting to horse of the Hare, the roe deer and wild boar.

Its main feature is the layer of smooth, hard to the touch, often thick, It can be completely white, Blanco-Café milk, White with spots, with a saddle or “capita” on the back, Orange, more or less intense.

It is a dog of solid structure, at the same time elegant and powerful, Billy is a dog (long line with thin head and well-developed truffle, lively eyes, open and dark and slightly lengthened with the strong top line trunk.

The height in males is of 61 - 67 cm., and in females in 58 - 62 cm.. The weight is situated between 25 and 30 kg. They have dark eyes, with black or brown palpebral edges, dog is a muscular and powerful. The tail is relatively long, and takes high.

It is a fundamental condition for a good performance at work, This dog arrives on the day of hunting in optimal physical conditions, He obtained with a rational diet and appropriate training. A preparation “Athletic” convenient can prevent mishaps on certain occasions, even serious, as the heart failure. Some owners are used to protect fur of Billy's atmospheric weather conditions, before the game, massaging the body with medicinal oil or lanolin.

Billy is a usual hunting dog live outdoors, to open spaces, are generally not adapted to life in the city, an apartment is a breed that will only last as long as there the packs. Although robust, The Billy should not be exposed to extreme cold, that they run the risk of contracting a disease of the bronchial tubes.

Not usually as a companion dog. 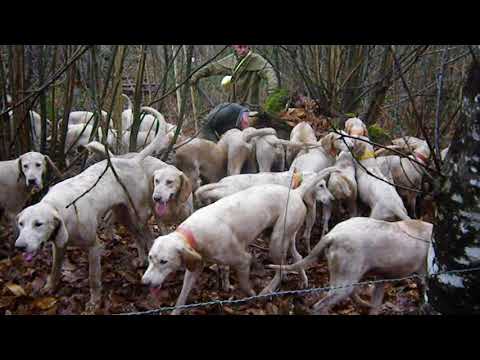