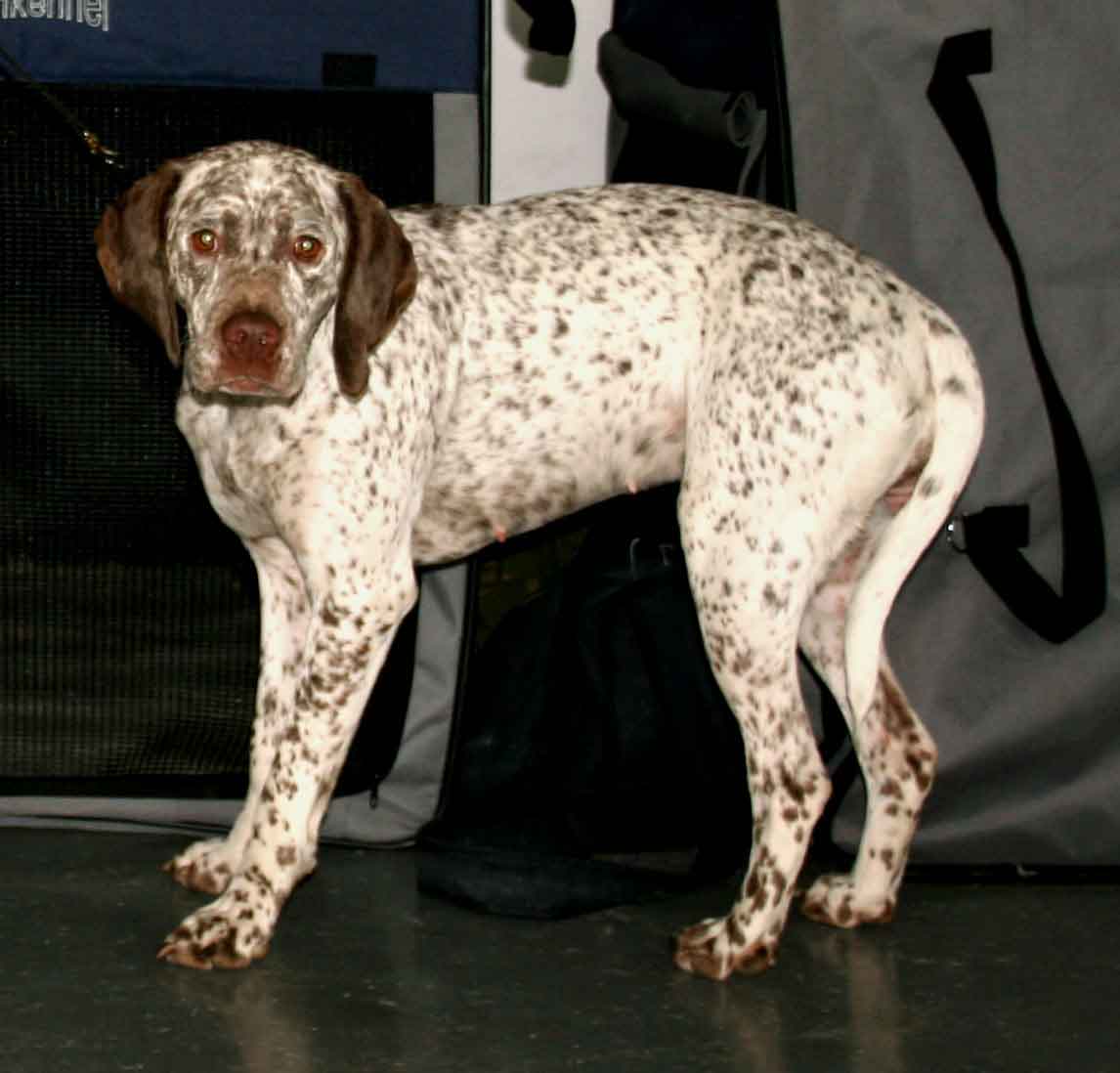 The Bourbonnais Pointing Dog at birth it is frequently tailless, it is also called “Glue cutter”.

The Bourbonnais Pointing Dog it was already known in 1598 like an expert quail hunting dog. The authors of the time described him as a pleasant companion for the hunter, rustic and healthy looking, born with a short tail, with a white fur, whole and finely speckled with light brown or fawn trout.

After World War I, a group of dedicated breeders formed the first Club du Braque du Bourbonnais in 1925 with the goal of reviving the race and restoring its pre-war prominence. The first breed standard was published in the club's first newsletter in 1930. Although the organization and these breeders made considerable progress, his efforts were again almost wiped out by World War II. It also, strict adherence to a natural tailless dog and strict color requirements resulted in a dog based on appearance rather than performance.

The result of this selection in reverse leads to a total disaffection of the breeders. Of 1963 to 1973, there were no registrations in the L.O.F. (Book of French Origins) ⓘ. In 1970, under the impulse of Michel Comte, a team of breeders set themselves the mission of ensuring the survival of the Bourbonnais Pointing Dog.

One second Club du Braque du Bourbonnais it was created in 1982 by Michel Comte, with the official recognition of the Central Canine Society (SCC), French affiliate of the FCI, in 1985. The goal of reviving the breed had been achieved, the breed standard relaxed, spotting and docked tails were found acceptable and the breed's remarkable hunting instincts were restored. The new breed standard was fully recognized by the SCC and the FCI in 1991. The standard was translated and published on the FCI website at 1998.

Photo: Braque_du_bourbonnais at the World Dog Show in Poznań by Pleple2000, CC BY-SA 3.0, via Wikimedia Commons

The Bourbonnais Pointing Dog is a robust, compact and muscular mid-size braque. Gives an impression of robustness and strength. The female has a slimmer and more elegant silhouette. Some dogs are born without a tail (anurus) or with a naturally short tail (brachyura). Tail docking is practiced in countries where it is allowed.

The head is pear-shaped, that is to say, rounded in all directions, with rounded side walls, well developed parietals and zygomatic arches. The pear-shaped head is typical of the breed.. The axes of the skull and muzzle are parallel or slightly divergent. Neither too light nor too heavy, the head is in proportion to the body. The eyes are large, rather rounded, hazelnut or dark amber, according to coat color. Medium length drop ears are situated at or just above the eye line.

The coat is fine, dense and short. It is finer on the head and ears, a little thicker and sometimes a little longer on the back. White spots are very invasive, finely speckled with brown (known as “wine lees” or “withered lilac”) the leonado (known as “peach blossom”) in all its variants. White and colored hairs can blend into a roan pattern. The ear generally wears the basic color more or less mottled. Color patches should be few in number and small in extent: must not exceed the size of the palm of the hand on the body and must never encompass both eyes at the same time on the face.

The Bourbonnais Pointing Dog is described in the breed standard as gentle and affectionate, but also passionate and intelligent when hunting. Easily adapts to the most varied terrain and games. Naturally seeks a high emanation and displays a useful and accurate stopping ability.

Options for exercise could include play time in the backyard, preferably fenced, or being taken for walks several times a day. Exercise can also be done in the form of indoor activities, like the hideout, chase a ball rolling on the ground or learn new tricks. Certain outdoor activities such as swimming, hiking and retrieving balls or frisbees can provide a good outlet for expending energy. Training for dog sports such as agility, obedience and rallying can also be a great way to give your dog some exercise.

The Bourbonnais Pointing Dog requires relatively gentle handling. Has the ability to perceive the mood of the manipulator, seeking eye contact at all times.

The Bourbonnais Pointing Dog has a fine, dense and short coat. It's a little thicker, and sometimes longer, in the back. On the head and ears, the hair is thinner and shorter.

Beyond periodic brushing, the occasional bath will keep your Bourbonnais Pointing Dog clean and looking its best. Grooming can be a wonderful bonding experience for you and your dog.. The breed's strong, fast-growing nails need to be regularly trimmed with a nail clipper or nail buffer to prevent excessive growth., breakage and cracking. The ears should be checked regularly to avoid accumulation of wax and debris, which can result in infection. Teeth should be brushed regularly.

Coexistence is important that you have with your new friend. Before considering the acquisition of a dog of the breed "Bourbonnais Pointing Dog" you know certain factors. Not all breeds of dogs are apt to live in an apartment, you must take into account his character, their need for exercise, their interaction with other pets, their care and if you have small children, their level of tolerance towards them.