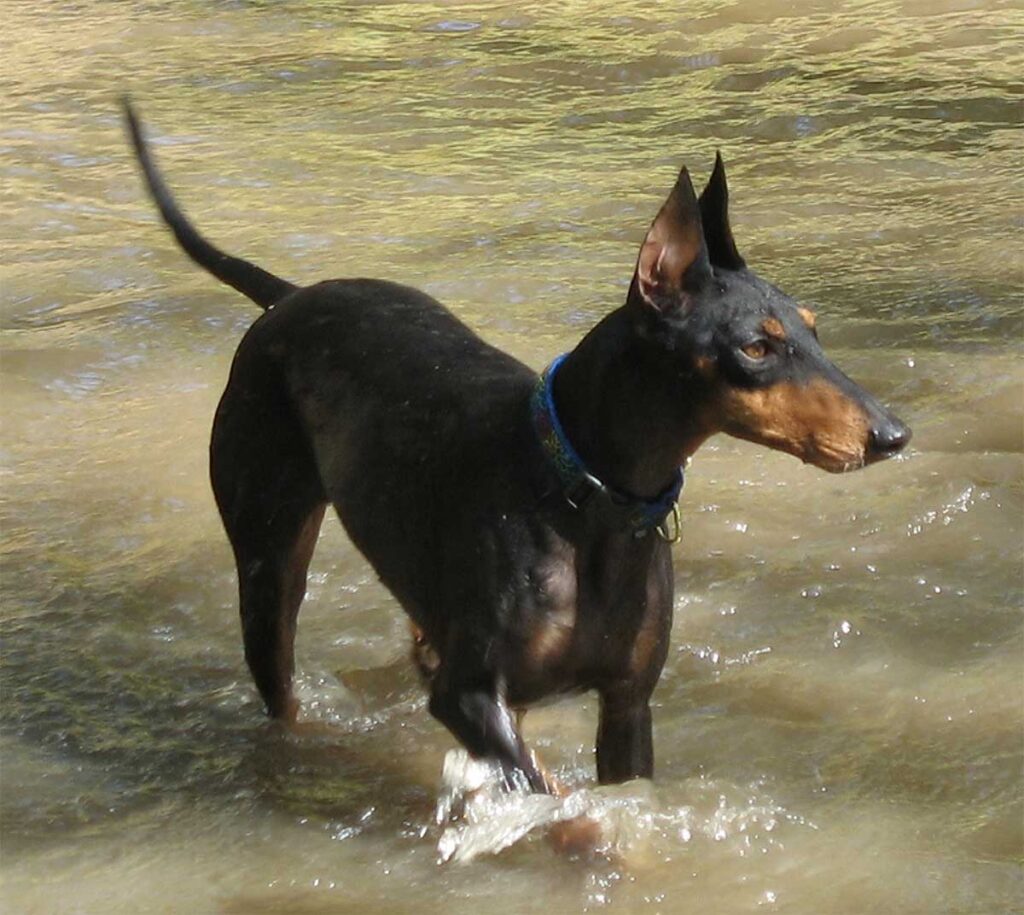 The Manchester Terrier is a slender dog, light, athletic and with very refined lines.

The Manchester Terrier it is a dog of Scottish origin, seems a reduced form of the German Pinscher aunque no tenga ningún lazo de sangre con esta raza.

The Manchester Terrier podría definirse como la versión moderna de un perro cazador de ratones denominado ‘Old Black and Tan Terrier‘, It was very popular during the 19th century in the cities of the North-West of England, where - apparently- lived for several centuries.

In the beginning, the Manchester Terrier was a dog specializing in hunt for rats and rabbits in urban contests, but with the prohibition of these competitions, el Manchester Terrier pasó a convertirse en un útil controlador de alimañas para quiénes vivían en el campo y, later, en mascota de compañía.

But Manchester Terrier since its inception has been townsman, not descended â€“ like other Terrier- field dogs, but that comes from urban dogs whose function was to put an end to the own city vermin: the rat.

While his presence in the world of canine competitions is not the same as old, Now you can enjoy these dogs in certain competitions.

The Manchester Terrier began to be called as such in the year 1897 (20 years after its creation).

The third coup led in the World War II, during the race nearly extinct, leaving only 11 copies across England.

The race begins to recover when a group of enthusiasts decided to form a club to promote the popularity of the Manchester Terrier, aunque ya solo se utilizara en exposiciones o como animal de compañía.

The Manchester Terrier it is a compact looking dog, elegant, solid and well structured.

The height in the males is of approximately, 41 cm. and in the females of 38 cm.. The weight is proportional to the height.
Its skull is long, flat and narrow, with a conical shape.

It has a short trunk and a compact back, rounded. The limbs are straight and proportionate to the size of the body.

The tail is not very long, It is thick in the inclusion and is tuned toward the tip, nunca debe sobrepasar la línea dorsal.

It has a layer of shiny hair, glossy, well bushy, smooth, short and very soft to the touch. The color is solid black with bronze spots (Dark mahogany).

Due to the entry into force of this Decree, the race Manchester Terrier lost so much popularity that was on the verge of extinction.

Unfortunately, despite all efforts of loving breeders of this breed, from then on, the recovery of the breed… was only partial.

By having an urban origin, the Manchester Terrier It is an ideal dog for life in a small flat in city. It is a very nice dog that adapts effortlessly to the home life, over all if leave you a hole in the bed or the couch.

It will be fully happy, If in addition to the overstuffed couch take it to give rides to open field, pues dará rienda suelta a su instinto cazador y se volverá loco de alegría persiguiendo ratones, crickets, lizards…, and all small shabby crossing on their way.

The Terrier, It is the most suitable to live in an apartment, does not lose hair practically, and by instinct is a clean dog. Learn fast, and in addition fond of children.

Create one Manchester Terrier is not easy. Su naturaleza multifacética requiere mucha mente y empatía de perro. He is also very sensitive and does not easily forgive injustice and disproportionate punishment.. Therefore, not easy to recommend as a beginner dog. However, si logras sentir y pensar tu camino hacia tu Manchester y así construir una estrecha relación de confianza, a hidden treasure is at your disposal. Especially for its multifaceted nature combined with its intelligence and docility, you can easily master any challenge with it, que se podría desear en una cooperación plena entre el perro y el hombre. You need a clear announcement and consequences based on a respectful and loving relationship with your master and lady. Yet Manchester Terrier likes to be raised and seeks cooperation with humans. Therefore, especially with him, much more than with other dogs in general, command and drill are completely out of place and counterproductive.

The Manchester Terriers They have some health conditions that may be of concern. They include an inherited bleeding disorder called von Willebrand disease, Hypothyroidism, patellar dislocation, Legg-Calve-Perthes disease (Toy Manchesters), and eye problems like glaucoma and cataracts.

Do not buy a puppy from a breeder who cannot provide you with written documentation showing that the parents were exempted from health problems affecting the breed. Have dogs undergo a “veterinary checkup” It is not a substitute for testing genetic health.

Remember that after bringing a new puppy home, has the power to protect you from one of the most common health problems: the obesity. Keep a Manchester with a proper weight is one of the easiest ways to prolong your life. Make the most of your preventive skills to help ensure a healthier dog for life.

When it comes to grooming, the Manchester Terrier he's an easy keeper. Although the breed is naturally clean with little dog smell, a bath every three months (or when it gets dirty) en un champú suave es una buena idea. Brush your elegant coat with a natural bristle brush or glove. Use hair conditioner / polisher to brighten hair.

The rest is basic care. Trim nails as needed, normally once every few weeks. Brush your teeth frequently with a veterinarian-approved pet toothpaste for overall good health and fresh breath. Check ears weekly for debris, redness or odor that may indicate an infection. If the ears look dirty, clean them with a cotton swab moistened with a gentle, pH-balanced ear cleaner recommended by your veterinarian. Enter the Manchester Terrier in the toilet when he is very young so that he learns to accept it, especially the nail cut, with patience.

as a rule, the Manchester Terriers they enjoy a long life as dogs, often more than 12, sometimes more than 15 years. However, a prerequisite is that they come from a healthy upbringing.

Deberías mirar más de cerca la raza y visitar a un criador mucho antes de comprar. The best way to buy your Manchester Terrier puppy is to buy it from a breeder who is a member of an FCI terrier club or can look around shelters. Sometimes there are dogs that come near the Manchester Terrier in type and character. The costs are about 1.200 EUR.

Coexistence is important that you have with your new friend. Before considering the acquisition of a dog of the breed "Manchester Terrier" you know certain factors. Not all breeds of dogs are apt to live in an apartment, you must take into account his character, their need for exercise, their interaction with other pets, their care and if you have small children, their level of tolerance towards them.

Manchester Terrier Chester and an apple

Sir Oxford the Manchester Terrier trying out his new boots!!