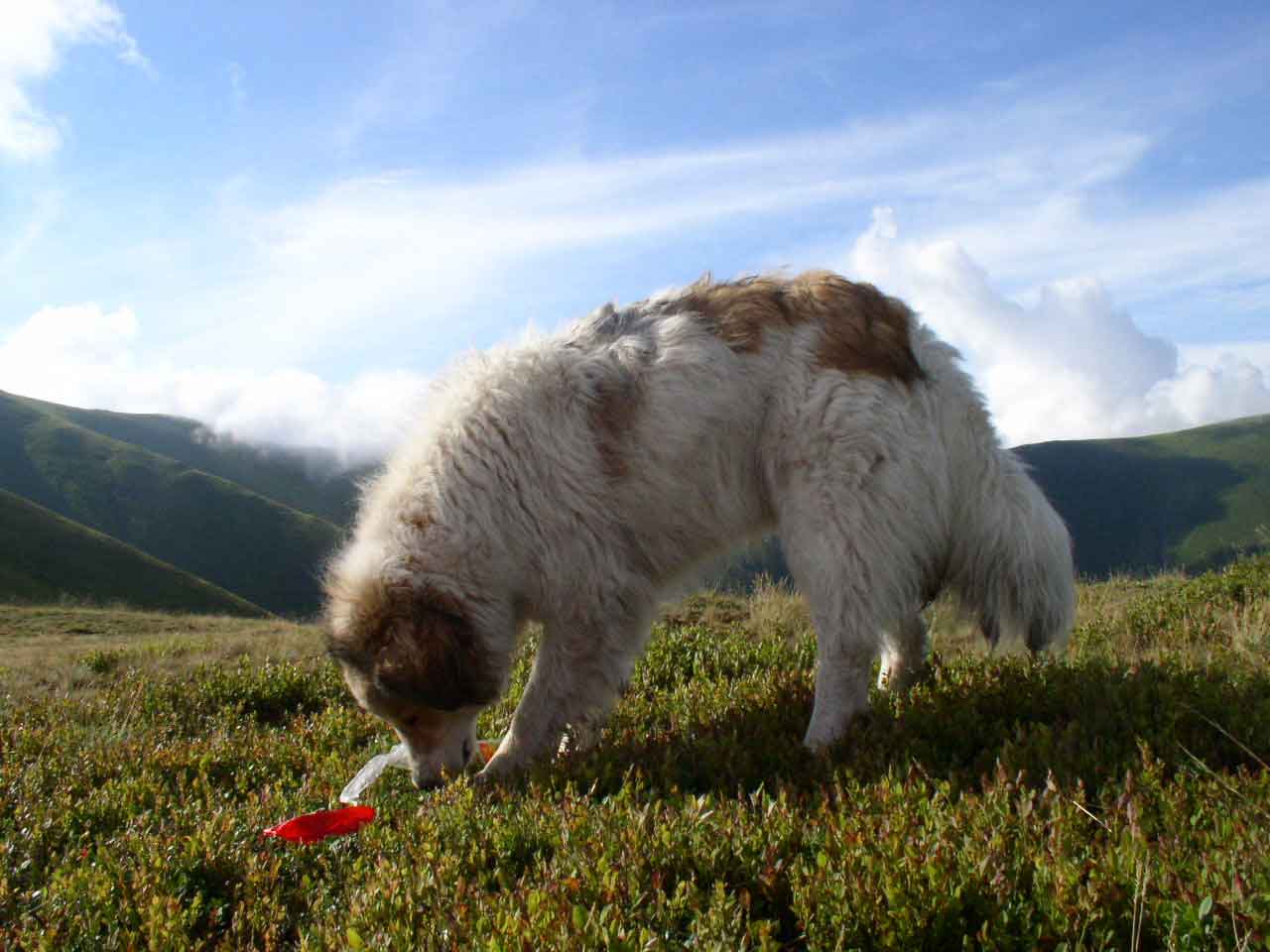 The “Romanian Carpathian Shepherd Dog”, also known as Carpatin (of his original name Ciobanesc Romanesc Carpatin), He is native to Romania, more precisely from the Danube Delta.

It is said to be descended from the Lupo races – molosoides, comparable in size to ancient mastiffs, pero con una morfología más cercana a la del lobo, and that has been used to protect herds for more than 9.000 years, that is to say, since the beginning of the domestication of cattle in this region.

Legend has it that their ancestors, a los que está físicamente muy unido, they interbred naturally with wolves, resulting in a powerful and fearsome race. Although there is no irrefutable evidence, such hybridizations between dog and wolf are known to have in fact occurred in various regions of the world, lo que hace plausible esta teoría.

A menudo cazando en jauría, nothing stops this dog with his courage and unerring protective instinct. There have even been cases where a herd of Carpathian shepherds has been seen repelled by an adult bear. The Romanian Carpathian Shepherd Dog has been selected over the centuries with the main criterion of utility, lo que explica por qué ha conservado intactas sus cualidades de perro de pastoreo hasta el día de hoy, especialmente porque Rumania todavía tiene muchos depredadores en su territorio, including wolves and bears. Over the years, they have also become increasingly integrated into the family as guard dogs; very protective of their master, it's a role they play wonderfully.

The first breed standard was developed in Romania in 1934. Después de la caída del comunismo en 1989, a few passionate breeders of the Romanian Carpathian Shepherd Dog developed the breed so that its standard could meet the criteria of the Fédération Cynologique Internationale. Their efforts paid off, ya que este último lo reconoció finalmente de manera provisional en 2005, and then definitely ten years later, in 2015. Among the other large canine organisms, the Société Centrale Canine and the United Kennel Club also recognize the Romanian Carpathian Shepherd Dog, what is not the case with the American Kennel Club, the Canadian Kennel Club or the Kennel Club, the leading organization in Great Britain.

The body is rectangular, vigorous and well developed, without heaviness. Its length is greater than the height at the withers, and the lumbar region may be slightly longer in females than in males.

The tail is held high, reaching or slightly exceeding the point of the hock. With abundant hair, hangs at rest but is carried high and slightly curved in action. It is neither flat nor rolled in the back.

The head is strong but not heavy, of type lupoid, with a stop moderately marked. The nose is always black, big and wide. The scissor bite is powerful. The eyes are medium in size, almendrada form, dark brown. The ears, situadas un poco más arriba de la línea de los ojos, they are triangular in shape, a little rounded at the tip, and fall close to the cheeks.

The inner layer is dense and flexible, color clear, but the hair is rough, smooth and dense. It is shorter and flatter on the head and front of the legs, longer in the neck, the back of the legs and tail. It is abundant and of medium length in the rest of the body. The fur is sable (Wolf) with white markings, and the skin is ash colored.

This protective instinct makes them mistrust strangers. In the presence of a stranger, will come between him and his family and bark as a warning, until his master makes him understand that there is no danger.

However, due to its friendlier temperament than the average of other guard dog breeds, también es un excelente perro de compañía. As a breed of dog adapted to children, he is very gentle with them and is a great playmate for them. Regarding the cohabitation of the dog with the cat, generally goes well. Last, the fact that they have long gotten used to defending themselves and working in packs also explains why they generally manage to get along with their peers, although they can be dominant with them.

Although it suits all families quite well, este perro grande y enérgico necesita mucho ejercicio y juego para mantener su equilibrio mental y su salud física. Therefore, better suited to a family that likes to move, and thus you can enjoy hiking with your dog (dogs-rando), from running with your dog (canicross) or cycling with your dog (cani-mountain biking). To feel completely fine, need at least an hour of daily exercise.

Therefore, not at all suitable for use in an apartment: un espacio demasiado pequeño y un ejercicio físico insuficiente podrían provocar trastornos de comportamiento en el perro, including uncontrolled aggression (even towards their owners) and / or destructive behavior on the part of the dog. This is all the more true since the Romanian Carpathian Shepherd Dog is slightly more sensitive and less independent than other guard dog breeds; therefore shows more anxiety in case of prolonged loneliness, especially if you are indoors with nothing to do to keep busy. Therefore, el hogar ideal para él es uno con un gran jardín cerrado donde pueda correr, and a master who is available to play with his dog and walk him for long hours.

Although the Romanian Carpathian Shepherd Dog it is a calm and balanced dog that is easier to train than other guard dog breeds, needs a strong education to start at an early age, since it has a strong character. It is imperative that the owner immediately show his dog who the master is and impose his authority, a riesgo de ver a su compañero con su impresionante físico tomar el control.

Although there have been cases of hip dysplasia or eye problems in some individuals, the Romanian Carpathian Shepherd Dog it is a robust breed of dog, able to stay outdoors in inclement weather without being unduly hindered and, In addition, no tiene una predisposición congénita a determinadas patologías.

Therefore, daily exercise and a balanced diet are enough to keep the dog healthy, vigorous and toned.

Although the Romanian Carpathian Shepherd Dog has a long fur, rarely needs professional grooming. However, it is recommended to brush the dog's hair daily with a wire brush or detangler, especialmente durante el período de muda.

If you spend most of your time outdoors, it is recommended to wash your dog once a month. However, if you stay inside, a dog bath every three to four months is sufficient.

Finally, how often a dog's claws are trimmed depends on its level of activity. It is best to inspect them from time to time and trim them if necessary.

Coexistence is important that you have with your new friend. Before considering the acquisition of a dog of the breed "Romanian Carpathian Shepherd Dog" you know certain factors. Not all breeds of dogs are apt to live in an apartment, you must take into account his character, their need for exercise, their interaction with other pets, their care and if you have small children, their level of tolerance towards them.

If you liked, rate this entry.
5/5 (1 Review)
Share with your friends !!
Twitter7Facebook1Pinterest
8
SHARES