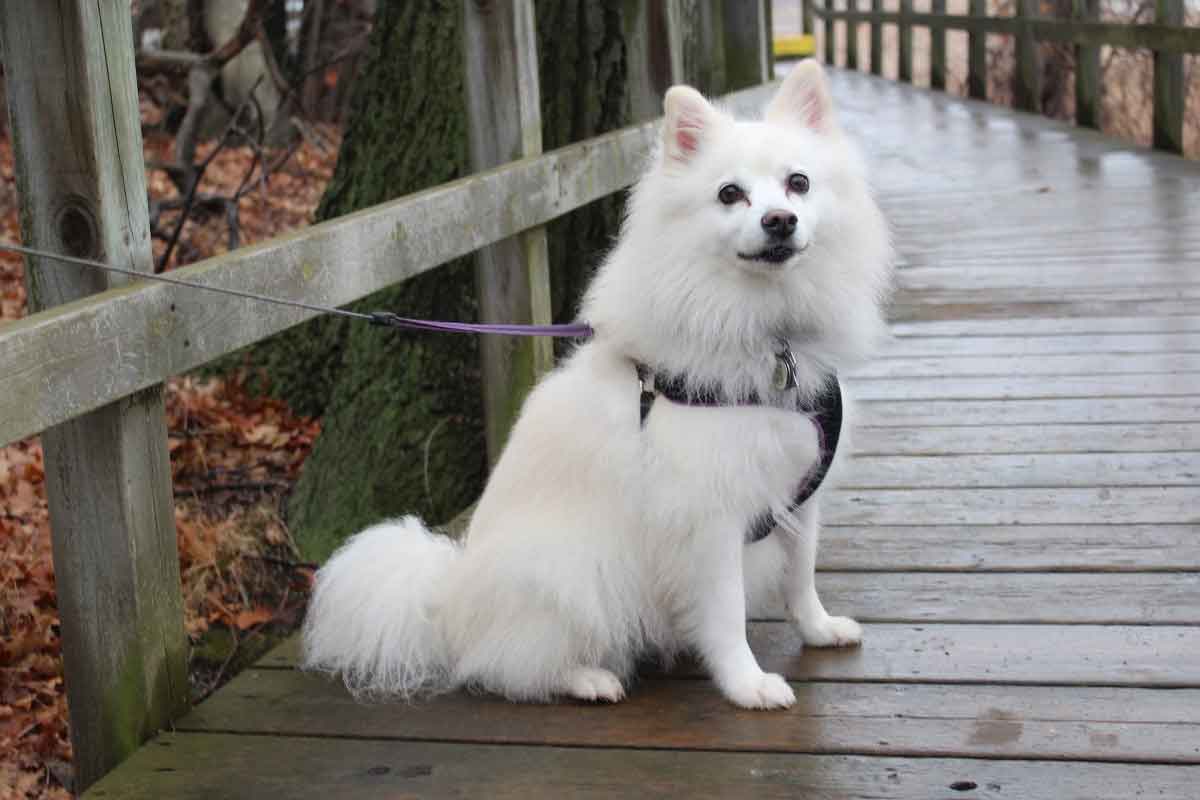 The Japanese Spitz he is a very people-oriented dog.

The strong similarity to the Mittelspitz (Standard or Medium Spitz) German allows us to suppose that the Japanese spitz descends from this same race. Other cynologists assume that the Spitz descends from the Nordic Spitz. One thing is for sure: the origin of Japanese spitz not in japan, but in Europe. From there he arrived in Japan at the beginning of the 20th century together with the travelers.

The attractive white dog with the charming character quickly gained popularity among the Japanese population. With more caps from China, Canada and the US, he established his own breeding in Japan in the years 20. While in Europe an attempt was made to increase the size of the lace, thus creating the German Spitz, the Japanese tended to opt for the more original compact form. In 1948 the Japanese Kennel Club established a first breed standard for the first time. Japan was designated as the country of origin in the standard. The FCI, that has officially recognized the Japanese spitz from 1964, includes it today in the Group 5 (Spitz and dogs of the original type), as well as in the Subsection 5 (Asian Spitz and related breeds), under Standard No. 262.

In his native Japan, the Japanese spitz it was very popular for a long time, especially in the years 50 the last century. Although it is still more common there in terms of numbers than in Europe, the demand of the little companion is gradually changing. While in Japan the number of recently registered cubs is decreasing, is increasing in North America and Europe.

This breed is distinguished by the fact that it is exclusively pure white.. Thanks to his straight and dense hair, the Japanese Spitz seems strong. What is no less important, it is also caused by the swollen inner layer. The beautiful ruffle on the shoulder, neck and sill contributes to attractive appearance. Typical of the tail is a long and voluminous flag.

Despite her short legs, the Japanese Spitz is sporty and extremely agile. Due to its balanced proportions, the appearance of this compact pedigree dog is both striking and harmonious.

The height at the cross – the elevated transition from neck to back – tends to be of 30 - 38 cm in adult males. Females reach a somewhat smaller size. The Japanese Spitz weighs between 4,5 and 11 kg.

The well balanced nature of the Japanese Spitz fits the very harmonious appearance. He is an attentive guard. Anyone who approaches him is not immediately signaled with a savage bark. Only when the Japanese pedigree dog feels a serious threat, gets loud and fights back vehemently.

At home, the Japanese Spitz behaves quite calmly. Abroad, on the other hand, he likes to show the energy he has inside of him. To enjoy the Japanese Spitz, you must like a little dog who likes to play. You should also have fun on long trips with your four-legged friend.

The Japanese Spitz he is a very people-oriented dog. Whether it belongs to one person or has a master or caregiver at the same time, he does not care. He also likes to live with the family. People's company is the priority. Pets or other pets are not enough. Although the Japanese spitz usually get along with them. So if you have little time for a dog, a Japanese Spitz probably not the right thing for you.

The white puppy enjoys the company of people and would like to be with them always and everywhere. He is very receptive and eager to learn. Which makes education in combination with devotion quite easy even for untrained dog owners.

An apartment in the city is suitable for him, as long as you are well occupied with extensive walks and activities.

Despite the hereditary predisposition to many diseases, Many of the ailments can be avoided by taking proper care of your Spitz. Dental problems in particular can be prevented through regular dental care, namely, brush your teeth at least once a week, or better daily. Diseases or inflammations of the eyes, nose, the ears and claws can also be detected and treated at an early stage with proper care and regular check-ups. Another important aspect of grooming is the care of the coat of the Japanese spitz. Despite the impressive and luxurious fur, This is not very elaborate and therefore it is usually sufficient if the hair is combed or brushed thoroughly twice a week. Only in the coat change phase (twice a year) grooming effort increases until daily styling.

An indication of good and serious parenting is the presentation of genetic test results.. The farm animals used must have an impeccable genetic makeup to exclude genetic diseases from the outset. Dogs in which hereditary diseases typical of the breed have occurred should be excluded from breeding for the sake of the breed's health. This also includes the tendency to dislocate the patella (kneecap slipping out of its guide), which can also be inherited in many dogs, especially in small dog breeds. Also eye problems, such as distichiasis or narrowing of the tear ducts, as well as dental problems can occur with the Japanese spitz. No other typical diseases of the breed are known.

The correct nutrition of the “Japanese Spitz”

In a special way, correct nutrition contributes to the health and well-being of the Japanese spitz. Small dogs with a very compact constitution have a strong tendency to be overweight. Too many pounds can easily lead to joint disease and heart and circulation problems.. Overweight dogs are also at higher risk for diabetes.

As the owner of a Japanese spitz, you should always keep the amounts recommended by food manufacturers. In addition, the dog should not be given too many treats between meals.

It is not only the quantity but also the quality of the food that is important. Besides vegetables or rice, good dog food consists largely of high-quality meat. Poor quality food often contains an excessive amount of cereals. Under no circumstances should it contain flavor enhancers or sweeteners.

Before buying, you should find out the exact composition of the dog food in the manufacturer's instructions. Several vendors offer good and safe dog food, both dry and wet.

It is not unusual for dog owners to prefer homemade dog food. This can also be an alternative to the ready-to-eat food available in stores for the Japanese spitz. However, it is essential that you acquire the necessary knowledge to cook balanced dog food yourself.

The diet BARF it is also a good way to feed Japanese spitz with a healthy diet. BARF means “Bone And Raw Food” (Bones and raw foods). All food components, like meat, fish, vegetables or fruit, they are only given raw. Various vendors and specialty stores facilitate BARF to the dog owner. Like cooking food, this feeding method requires a certain amount of knowledge about the correct use of raw ingredients.

Despite the growing popularity and demand in the European and American continent, the Japanese spitz still belongs to the rare dog breeds. The waiting period for a new litter in a breeder can be very long. Who doesn't necessarily care about a purebred puppy, but also consider buying a Spitz adult, should – parallel to the search for a breeder – also look around the animal shelter, where over and over again Spitz or the crosses of Spitz they are waiting for a new and loving home. A puppy, on the other hand, should only be purchased from a serious and certified breeder.

How do I recognize a serious breeder?

When choosing a suitable breeder, various factors play a role. It's not just “formalities” the ones that must be correct, namely, the papers, the pedigree and the sales contract, but also personal reasons that ultimately decide the purchase. The breeder must, first, be understanding with you, and this cannot be found out with a short email or a short phone call. One or better several meetings are necessary to get a complete picture of the breeder and his dogs.. Does the breeder invite you to his house? Will you willingly show your “dog pound” and the animals live in close contact with the breeder's family? The first weeks are very important for the socialization of the puppies and therefore the environment must correspond absolutely to the affectionate nature of the puppies. Japanese spitz. In addition, a serious breeder will be able to tell you a lot about the breed and its characteristics. They will also ask you about your life circumstances to make sure your puppy has fun with you..

Coexistence is important that you have with your new friend. Before considering the acquisition of a dog of the breed “Japanese Spitz” you know certain factors. Not all breeds of dogs are apt to live in an apartment, You must take into account their character, their need for exercise, their interaction with other pets, your care and if you have young children, their level of tolerance towards them.