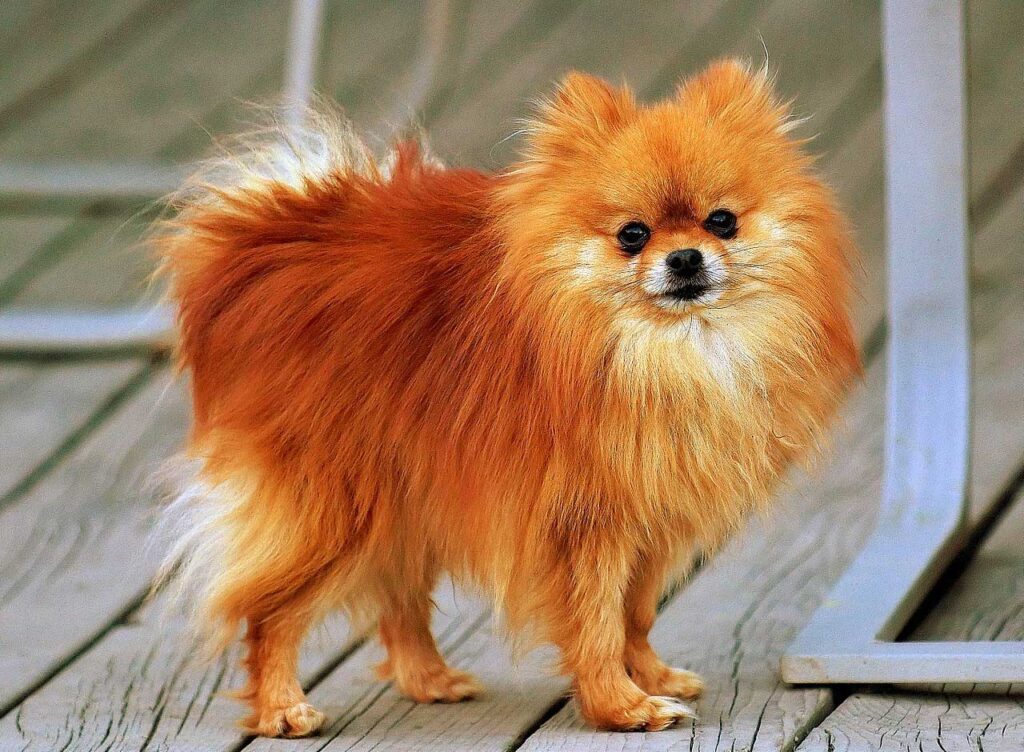 The Pomeranian (Deutscher Spitz;, Pomeranian Lulu or Deutscher Zwergspitz) It is a dog of the Spitz family, named for the region of Pomerania Central, Eastern Germany, and is classified as a dog “Toy” because of its small size.

The region of Pomerania, bathed in the north by the Baltic Sea and bounded in the west by the island of Rügen and in the east by the Vistula River, It was occupied by many peoples, celts, Slavs, Poles, Swedes, Danish and Prussian. Its name comes from Pomore or Pommern, what it means “by the sea”, and it was given in times of Charlemagne. Is in Pomerania where the Spitz won fame as a pet and dog work.

The reduction of size of the animal and the development of its variety of colors is attributed to breeders, following trial and error methods and applying the genetic theories of Gregor Mendel. The current Pomeranian is small due to selective breeding, but retains the robustness and coat typical of cold-climate dogs.

It was Queen Charlotte of England who introduced the Pomeranian among the nobility of her country, but the Pomeranian only achieved international fame when her granddaughter Victoria returned from a vacation in Florence, Italy with a Pomeranian named Marco.

It should be noted that, the Pomeranian as a modern race did not exist until the 19th century. The dogs of the Queens Charlotte and Victoria were much larger, probably a German Spitz and a Spitz Volpino. The same can be said of other historical owners of pre-19th century Pomeranian dogs.

However this nomination can be discussed already in a painting of the 15th century by the author Jan Van Eyck, entitled “The Arnolfini marriage” there is a dog with the same characteristics of the Pomeranian. The closest relatives of the Pomeranian are the Gray Norwegian Elkhound, the Samoyed, the Schipperke and the family of the Spitz.

According to official documents, in the sinking of the Titanic, on the morning of the 15 in April of 1912, only 3 dogs were able to be rescued, being two of them race Pomerania. Is known that one of them was called “Lady”, and was owned by Margaret Hays, who also saved his life.

according to one of the rules, the Pomeranian must be balanced; in other words, all parts of your body must be proportionate. You must also have a warning reflex expression of his temperament, that tends to make them very indicated as guard dogs.

Its head is triangular in shape, What gives true zorruno aspect. The ears are small and raised. The tail, breed characteristic, You must bend on back and behave high and horizontal.

The coat of the Pomeranian has two layers, the internal, dense and smooth, and the foreign, long, LaCie and more rough. Males move the bottom once a year; intact females do during heat, After giving birth, and in times of anxiety.

The Pomeranian are generally a healthy breed, resistant and long, they live between 12 and 16 years. Its main problem is the dislocation of patella. Legg-Calvé-Perthes syndrome and hip dysplasia can also occur, Although they are less frequent in this small breed.

They are also prone to suffer dry keratoconjunctivitis, unrest in the lacrimal ducts and falls, It can appear in young adults and lead to blindness.

The Pomeranian, like most races “Toy”, they are prone to dental problems, It is recommended to brush their teeth every week and, If it is possible, daily.

The care of the hair of the Pomeranian is similar to the Peking. It is essential to brush them daily or at least twice per week to the thick fur is not enmarañe, seasonal moulting. Recommended care newspaper of ears and nails, as well as seasonal baths. However, is better to not bathe them too, the loss of essential oils can damage skin and fur.

The Pomeranian adapts easily to the urban life and they are excellent for the field, where wakes up the deep Hunter instinct of their wild ancestors.

The Pomeranian is very active, Intelligent, courageous and loyal. However, may not interact well with young children, and because of their small size may suffer child abuse. It must be borne in mind that it is a spiteful dog, and strong-willed, like all Spitz, so it will not tolerate the mistreatment by the small, and will bite. If you reach this situation, the animal will remember him always, and displays elusive, and uncomfortable in the presence of children.

The Pomeranian can be trained as guard dog are able to announce the arrival of intruders with barking sound and sharp.

Unfortunately, the lack of a thorough training has given them a reputation of ladradores constants and without reason.

The Pomeranian dog is a dog of independent, and sometimes gives the impression of being a solitary animal.

They don't like it - especially- physical contact, although they do appreciate the caresses, and that they rasquen them back and ears, where are more sensitive.

Due to its small size, and its appearance of Teddy, people have the tendency to pick up the dog in her arms, which the animal disliked. That is why before reach out to touch any dog alien, It's always good to ask for approval to his master.

They are extremely faithful, and they like to spend long time lying at the foot of their masters. Feel preference by a person of the family, Although faithful will be displayed, and docile with all the people of the nucleus. It is not uncommon that display suspicious, and aggressive in the presence of strangers.

The Pomeranian is a dog jealous, capricious, and territorial, and because of its small size, owners tend to pamper them, and consent to them. If you want to introduce another dog, along with the Pomeranian, it is better to do it when the animal is still a puppy, because otherwise it will not tolerate the presence of other animals.

Due to its thick cloak of hair, double layer, It is not uncommon to find the Pomeranian dog resting on hard surfaces, and fresh.

We need special caution in summer, as they tend to look for cool and shady corners to lie down, and there is a risk of stepping on it.

Coexistence is important that you have with your new friend. Before considering the acquisition of a dog of the breed "Pomeranian" you know certain factors. Not all breeds of dogs are apt to live in an apartment, you must take into account his character, their need for exercise, their interaction with other pets, their care and if you have small children, their level of tolerance towards them.