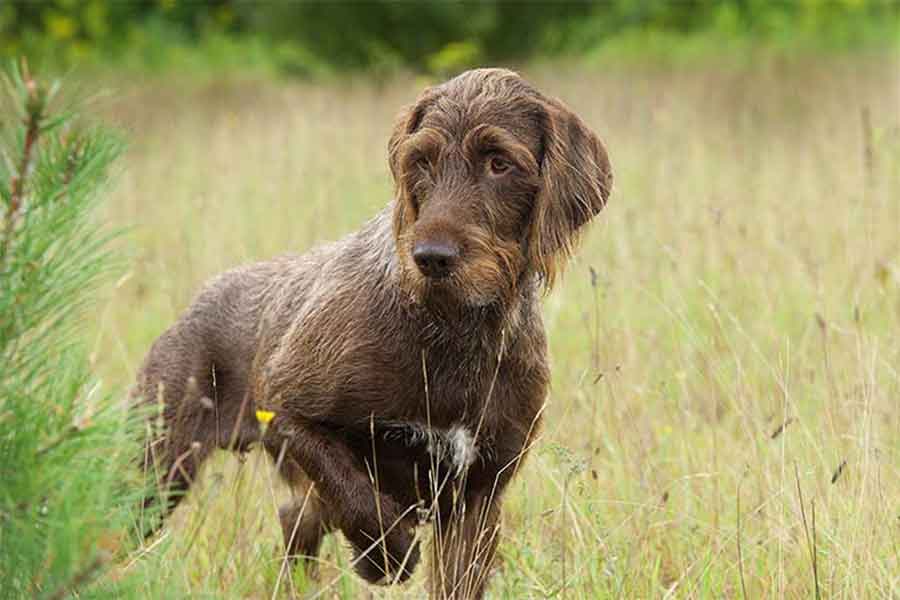 The Pudelpointer has a great passion for water and swimming, which probably comes from the Poodle's influence on his selection.

It was the German Baron Von Zedlitz, a real foodie, who created the Pudelpointer towards the end of the 19th century.

The Pudelpointers are Pointing Dogs hard hair, whose genetic origins can be traced back to a cross between a English Pointer and Pudelhund, without any other race of Pointing Dogs. Although the Poodle it was only used to create the first strains, his qualities as a hunter have been preserved until today.

The first crossing of a Pudelhund and English Pointer to establish the new breed took place in Germany in 1881. The father was a English Pointer property of Kaiser Federico III called tell and mother, a Poodle named molly, belonged to a famous Teutonic author on the subject of hunting dogs, Hegewald.

The genes of Poodle, like race, seemed to have been more dominant in the broadcast. To alter this, many more were introduced Pointers What Poodles in the breeding program to get to what the Pudelpointer is today. During the first 30 years of parenting, they only used 11 Poodles instead of more than 80 Pointers. After that initial time period, only the occasional reintroduction of the Pointer. After WWI and WWII, the breed was severely reduced and the reintroduction of the English Pointer became important to rebuild the brood.

Combined with the exceptional abilities of the English Pointer to work on the plains, namely, a fine and receptive nose even at a distance, a quick search that covers a lot of ground and firm stops, we have created a versatile and genetically strong hunting dog that meets the requirements of hunting.

Germany is very careful in preserving the health of the breed, with increased vigilance against hip dysplasia and epilepsy. In addition, the Pudlepointers currently play an important role in hunting events, since only dogs that have participated successfully in them are registered in the pedigree registry.

The Pudlepointer It is a breed of dog weighs between 20 and 30 Kg., measured between 53 and 66 cm.. on the shoulder and comes with liver colored fur, brown and occasionally black. The ideal coat is hard, lean and dense.

The Pudelpointer it is a large hunting dog that weighs between 20 and 30 Kg and measures between 53 and 66 cm.. The ideal type has the construction of a heavy pointer. The tail extends the rump in a regular line without breaking. The tail can be shortened for hunting and, if the law allows it, the length must reach the lower edge of the vulva in females or cover the testes in males. The length of the skull is equal to that of the muzzle. The ears are medium in size, hanging ears are high and close to the head. The tip of the ear is slightly rounded. Located on the sides, eyes are large and dark amber.

Covering the whole body, medium length hair is rough, close and close to the body, with a thick undercoat. The head has a beard and a toupee with curly highlights. The hair must provide protection against the cold, water and injuries. The coat is solid black, brown or dead leaf. White spots are allowed. These dogs shed very little hair.

Of the English Pointer, inherited the subtle nose, the burning and the lively gait. The Poodle gave him the liveliness of the spirit, the talent of transporter and the taste of water.

Energetic dog, very enthusiastic tracker and retriever at work, is comfortable on all terrains and can tolerate all weather conditions quite easily.

Germany, the country of origin of the Pudelpointer, attaches special importance to the health status of the breed with special emphasis on the prevention of hip dysplasia (HD) and epilepsy in the breed. Some dogs may face these health challenges in their lives, but most of the Pudelpointers they are healthy dogs. Working with a responsible breeder, prospective owners can get the education they need to learn about specific health concerns within the breed.

The Pudelpointer has a close layer, flat, hard and rough of medium length with a dense undercoat; as a result, seasonally shed. Beyond regular weekly grooming, the occasional bath will keep you clean and looking your best. Grooming can be a wonderful bonding experience for you and your dog..

Strong and fast growing nails should be trimmed regularly with a nail clipper or nail polisher to avoid overgrowth, breakage and cracking. Ears should be checked regularly to avoid build-up of wax and debris, which can result in infection. Teeth should be brushed regularly.

The Pudelpointer, as a hunting breed, need regular exercise. Exercise options may include backyard playtime, preferably fenced, or be taken for walks several times a day. Exercise can also be done in the form of indoor activities, like the hideout, chase a ball rolling on the ground or learn new tricks. Certain outdoor activities such as swimming, hiking or retrieving balls or flying discs can provide a good outlet for expending energy.

Note: He Pudelpointer absolutely love water! Training for dog sports such as agility, obedience, and the rally can also be a great way to give your dog exercise.

Coexistence is important that you have with your new friend. Before considering the acquisition of a dog of the breed “Pudelpointer” you know certain factors. Not all breeds of dogs are apt to live in an apartment, You must take into account their character, their need for exercise, their interaction with other pets, your care and if you have young children, their level of tolerance towards them.