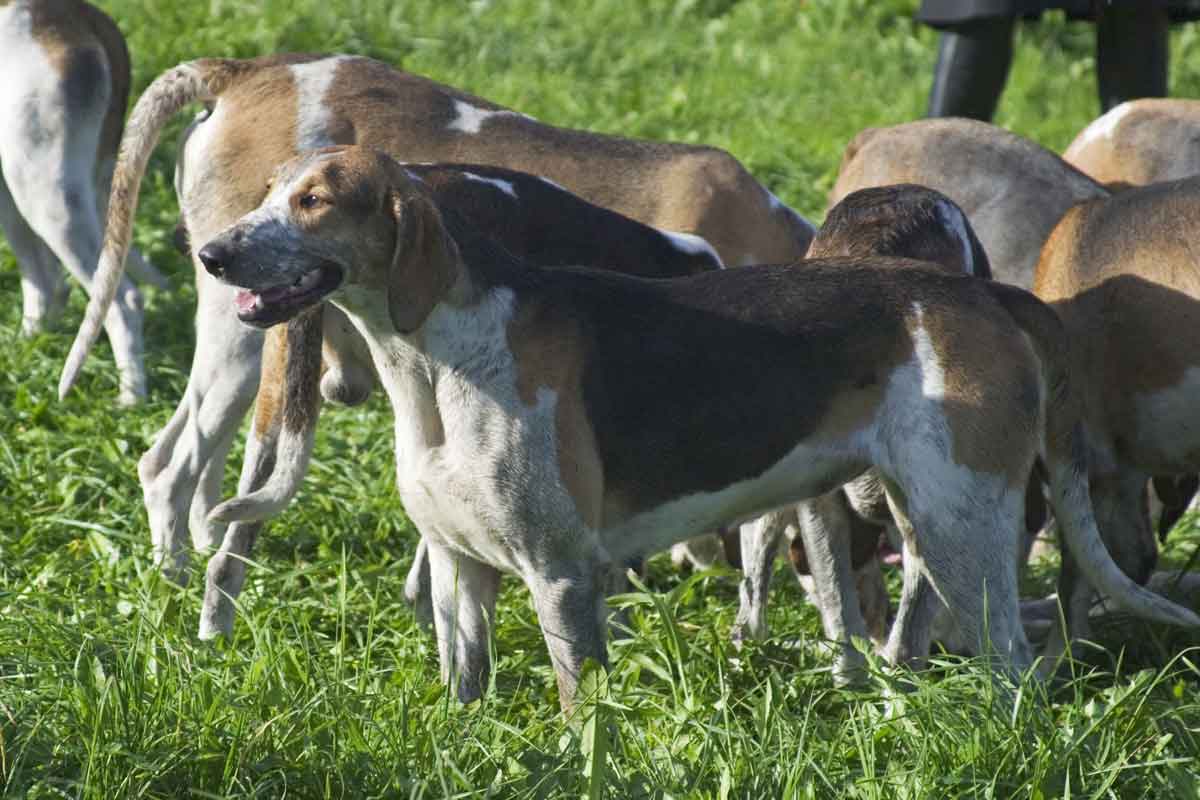 The Great Anglo-French Tricolour Hound is considered rare, very little spread outside of France and currently little used even in your country.

The Great Anglo-French Tricolour Hound is a large and powerful sporting dog with its origin in France. He is praised for his incredible endurance, work skills and ability to operate on any type of terrain and for any weather condition. This breed is poorly adapted to apartment living due to its high exercise requirements. This type of Anglo-French hound is considered the most powerful.

Photo: This dog is one of a pack of Grand anglo-français tricolore by Alephalpha, CC BY-SA 3.0, via Wikimedia Commons

The origin of the Anglo-French hound dates back to the 19th century, when hunting with large packs was at its peak in France. However, the exact date of its development remains unclear, since the crossing of the French hound with different types of English hounds was a common practice in this country since the 16th century.

French hunters cared little about the appearance or pedigree of their dogs as long as they demonstrated unsurpassed hunting prowess. That is why these hounds were perceived more like stray dogs until the 20th century. The situation changed when in 1957 the breeders decided to organize the dogs according to their ancestry. His efforts resulted in the emergence of seven unique French breeds of sizes, coat texture and distinctive colors. The Great Anglo-French Tricolour Hound appeared as the result of the crossing of native French dogs, in particular the Poitevin hound and the Gascon Saintongeois and the English Foxhound. The breed is very rare, little used and virtually unknown outside of mainland France.

The word “Grand” was put in front of the breed name because it was used to hunt big game and functioned predominantly in packs of several dozen other canines. The Great Anglo-French Tricolour Hound is characterized by its resonant voice, his keen sense of smell and his relentless pursuit. This brave and passionate hunter will never be hampered by difficult terrain and severe weather and can work for many hours without breaks. The packs of Anglo-French hounds they generally specialized in hunting roe deer and wild boar, although they could also hunt foxes and other small game animals.

Currently members of the breed are mostly active hunters as this dog is not suitable for the role of pet or show dog. Its population was concentrated almost exclusively in its native France, where it is also considered a rare breed. However, the Great Anglo-French Tricolour Hound has the recognition of the Fédération Cynologique Internationale (FCI) and in 2006 was officially recognized by the United Kennel Club (the UKC).

The Great Tricolor Anglo-French Hound should appear elegant and almost old-fashioned in appearance. They must be robust, with a deep chest and a straight back that is supported by straight, muscular limbs. His broad skull has an obvious stop, while its square-shaped snout should contain a full set of teeth that meet in a scissor bite. Her big brown eyes, its hanging ears and prominent black nose are all characteristic features of an olfactory hound. Its long, thin tail tends to have a white tip.

As its name suggests, it is a tricolor breed with white fur, fire and black. Its double coat is short and soft. Dogs measure between 60 and 70 cm in height to the cross, generally weigh between 30 and 35 kg. Your walk should be effortless and a pleasure to behold.

The Great Anglo-French Tricolour Hound he is a magnificent sporting dog, that is very rarely used only as a pet. It is used to living in large packs of other canines and requires a spacious patio to unleash its exuberant nature. Some fans of the breed claim that their well-socialized specimen is fine with children. Anyway, this vigorous and strong dog will not make an acceptable playmate for a young child.

The breed often demonstrates unwavering loyalty and affection towards their favorite people, but he stays quite distant from strangers. However, a Great Anglo-French Tricolour Hound well mannered will treat a new person with essential courtesy. Usually does not express enough interest in protecting its territory to be an effective watchdog. At the same time, some specimens can be made good watchdogs. Anyway this breed will definitely not make any use of the guard dog role due to its non-aggressive disposition.

The Great Anglo-French Tricolour Hound was bred to live and work with other dogs and usually yearns to have several permanent canine companions. He does quite well with strange dogs although he will not back down from confrontation if provoked. That is why this dog should always be kept on a leash while walking. Being a tenacious and reliable hunter, it can show high aggression towards other species of animals., especially towards homeless cats. It is possible to introduce this dog into the house with other non-canine pets while it is still a friendly and inquisitive puppy.

The most common problems for the breed include:

The Great Anglo-French Tricolour Hound should be fairly basic maintenance. The owner should brush his dog a couple of times a week to keep his short, sleek coat in a healthy condition. The dog's nails should be trimmed monthly.

After every hunting trip, the coat and ears of a working specimen should be thoroughly examined for signs of ticks and other external parasites. The breed tends to easily contract various ear infections, so they need regular and careful cleaning. The Great Anglo-French Tricolour Hound he is a moderate biter.

The training of the Great Anglo-French Tricolour Hound usually requires an average investment of time and effort. In fact, takes a very natural hunting behavior and will effectively carry out its original hunting duties with a minimum of training. At the same time, is characterized by a certain streak of stubbornness and will not follow the orders of a week or an indecisive person. This dog usually has a strong desire to impress its owner and easily learns basic commands.

Breed training should be done exclusively with reward-based methods, with an emphasis on the dog's favorite treats. The Great Anglo-French Tricolour Hound will not endure abusive or disrespectful treatment and will respond to it with even more stubbornness and disobedience.

The Great Anglo-French Tricolour Hound is an extremely vigorous working dog, used to very intense physical exercise. When not hunting, he must be given the opportunity to expend his excessive energy. This dog is an infamous cat hunter, so it should never be released without a leash until it is in a closed and secure area.

During the hunting season it is advisable to offer the dog some type of exercise that emulates its hunting behavior. It is worth remembering that if the Great Anglo-French Tricolour Hound lacks opportunities to vent, will gradually turn into a rebellious animal, hyperactive and destructive.