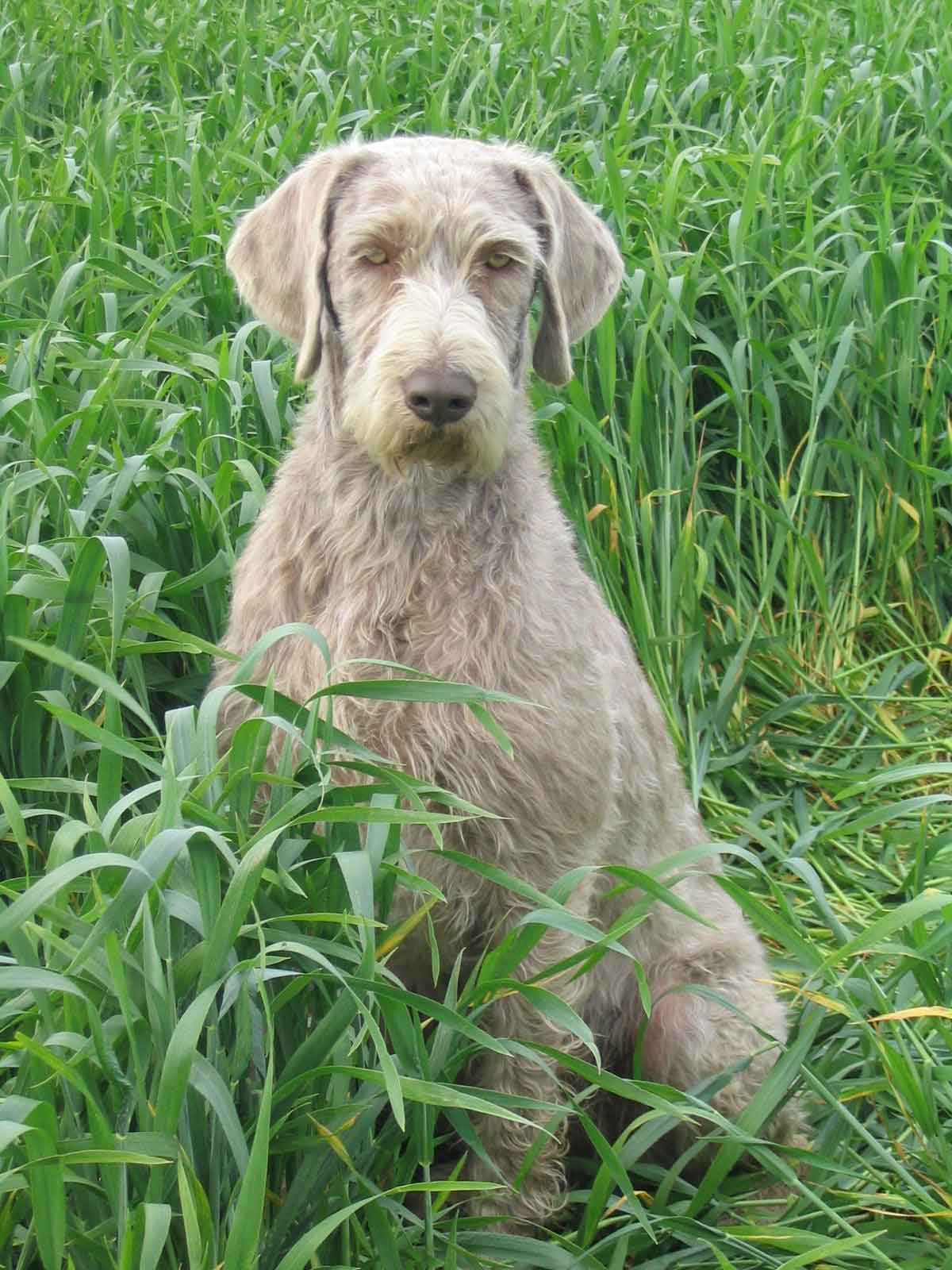 The Slovakian Wirehaired Pointers in an obedient and easy to train dog.

The Slovakian Wirehaired Pointers is a relatively new breed. It dates back to the end of the decade of 1950, in Czechoslovakia after World War II and is believed to have been developed using the Weimaraner, the German Wirehaired Pointer and the Český fousek.

At any given time, the Slovaks who developed the breed asked the Club Weimaraner from Germany to recognize this dog under the name of Rough-haired Weimaraner, but the request was rejected.

The resulting dog is a true wonder, that combines the talents of a hunting dog (on the plains, in the woods and in the water), a working dog and a companion dog. Adapts to all climates.

The Slovakian Wirehaired Pointers it's a tall braco, solidly built and not too heavy. This breed is bred to be a working dog, with nobility in its forms. Tail is cut to half length when permitted by law. It stands rather high, worn at rest and in horizontal action. The eyes are almond-shaped, amber, with a clever expression. In puppies and young dogs, are blue. The floppy ears are placed over the eye, they are rounded and not too long.

The undercoat consists of a short, fine down that normally falls off in summer. The top layer is about 4 cm long, hard, straight and well laid. At the bottom of the muzzle, hairs are longer and softer and form a mustache. Above the eyes, are more pronounced and are obliquely erect. The forehead and occiput are covered with short, hard hair. They are short and soft on the ears. The tail is well provided with hair, but it is not brushed. The basic color is “grey”: is a sand shaded with brown. White markings are allowed on the tips of the legs and on the chest. Smaller or larger dark spots can mark gray. There is also a speckled coat.

The Slovakian Wirehaired Pointers described in the FCI standard as easy to train and compliant. They are selected for their work characteristics such as Pointer dogs. They hunt on the plains, forests and water. They work mainly after the shot, searching and recovering the game.

The Slovakian Wirehaired Pointers it's animated, happy and eager to please. He has a lot of energy and is very intelligent, but gets bored easily. This can sometimes make training a bit difficult, and should work to make training sessions fun, interesting and not very long. They need a firm and consistent hand in discipline with structure and limits. Harsh words or physical punishment should be avoided. They have a strong bond with their families, and may develop separation anxiety without proper conditioning.

the Slovakian Wirehaired Pointers they are the happiest doing things with their owner. This makes the breed a great candidate as a canine companion for owners who love walks., cycling or jogging. It is imperative that they have opportunities to run free, preferably in a fenced area, since his hunting instinct is very strong, and the dog will not be able to resist the urge to chase the prey.

The Slovakian Wirehaired Pointers it is a generally healthy breed, and responsible breeders examine their breeders for health conditions such as elbow and hip dysplasia, progressive retinal atrophy and cataracts.

The Slovakian Wirehaired Pointers requires only minimal grooming to maintain good condition. Cleaning them with a damp cloth is usually sufficient between baths. Using a grooming glove or comb on your coat during fall season can help keep the amount of hair shedding low in your home.. Toenails should be trimmed every four weeks. A dental care regimen should start at an early age to avoid problems later in life.

Coexistence is important that you have with your new friend. Before considering the acquisition of a dog of the breed "Slovakian Wirehaired Pointers" you know certain factors. Not all breeds of dogs are apt to live in an apartment, You must take into account their character, their need for exercise, their interaction with other pets, your care and if you have young children, their level of tolerance towards them.

If you liked, rate this entry.
5/5 (1 Review)
Share with your friends !!
Twitter17Facebook2Pinterest
19
SHARES