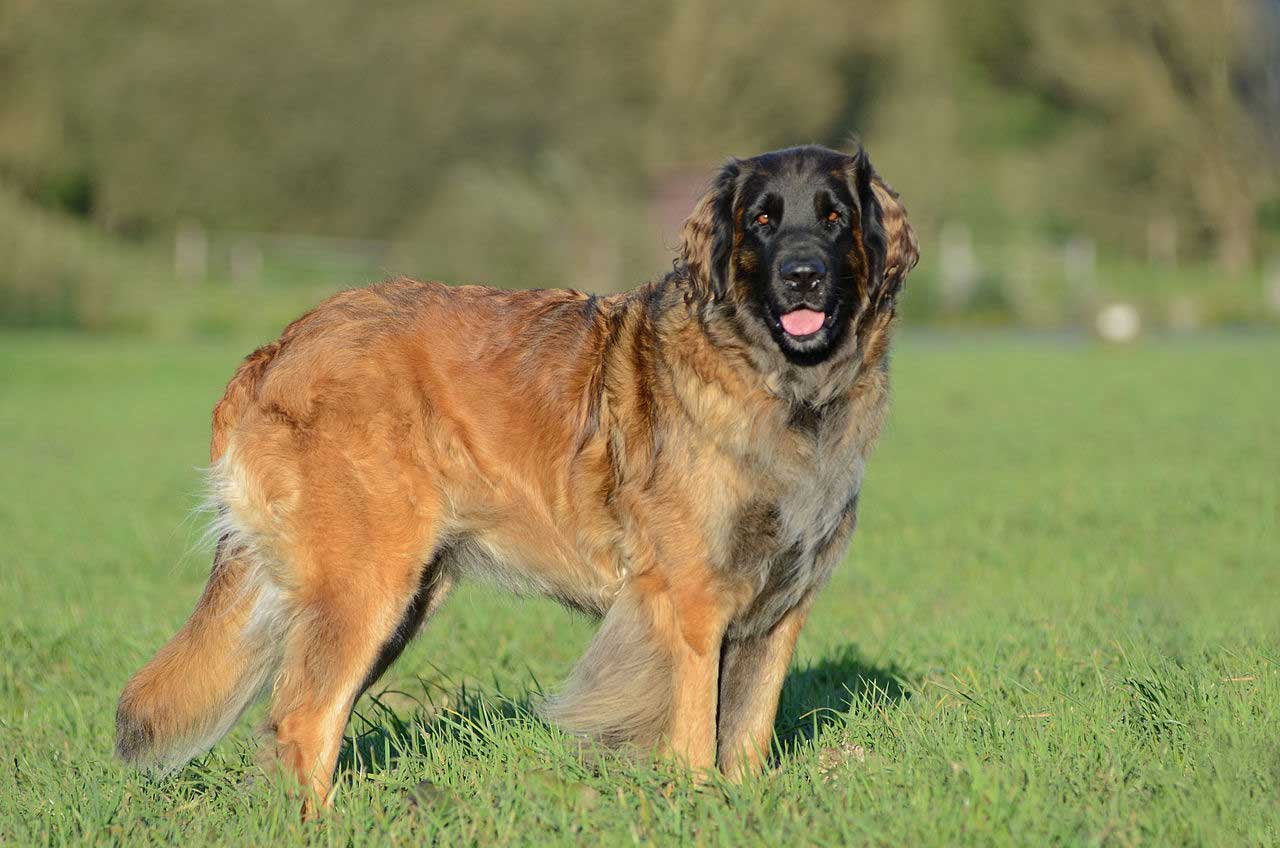 Once you get to know Leonberger dogs better, you will be enchanted by them forever.

The Leonberger it is a very big and beautiful dog. In his head and in his charisma he remembers a St. Bernard and a lion at the same time. And this is not a coincidence, because the St. Bernard is one of the ancestors of Leonberger. The Leo, as his friends call it, It is a young and at the same time old breed of dog. This breed is ancient, because it has been specifically bred according to the standard since 1846. The Leo It, therefore, one of the oldest dog breeds in modern breeding. At the same time it is a breed of young dog; because it was only created at that time. Most other pedigree dogs have a long history and originated from ancient breeds of working dogs.

The Leonberger, However, it has a different and unique history. Between 1820 and 1850 San Bernardo became fashionable throughout Europe. The heroic exploits of the legendary St. Bernard Barry at the Great St. Bernard Pass in the Alps had a great effect. Barry has been shown to save more than 40 people of death by snow. Everywhere people wanted these big dogs and they were (and they are) really big dogs.

Breeders and traders were unable to meet the high demand. At the same time high prices were paid for a puppy of St. Bernard. So quite a few dog dealers from southwest Germany helped out. They mated St. Bernard with very big bitches from the region. Puppies that looked like a St. Bernard they were sold as such, but for the others there were at most a few potatoes from a farmer. The dog trade was – as it still is today – a lucrative business and some sold hundreds of puppies a year and got rich.

Like Leonberg City Hall and dog vendor Heinrich Essig. An intelligent idea occurred to him and turned need into virtue. He created a brand out of puppies that he couldn't market as St. Bernard. Instead of giving them away, sold the puppies for good money. Thus was born the Leonberger. Inspired by the lion from the coat of arms of his hometown, this new breed of dog has the appearance of a lion. His dogs were nicknamed Leonhardiner in the envious competition. Also in the official world of dogs these hybrids went unnoticed for a long time. Like this, el cinólogo Ludwig Beckmann, universally recognized at that time, does not even mention the Leonhardiner in his two-volume work “The breeds of the dog” (Dog breeds) of 1895. From the point of view of health, such a genetically heterogeneous offspring is an advantage.

The Leonberger it should be a success in all respects. Today it belongs to the primitive rocks of the world of breed dogs, that no dog lover wants to miss. In 1895 was founded the “International Dog Club Leonberger“, which quickly achieved official recognition of the Leonberger like race. In 1948 followed by “German Dog Club Leonberger” based in Leonberg, which still represents the Leonberger at VDH and around the world. The Leonberger has a unique charisma, imposing and at the same time friendly, quiet and just sovereign. Its appearance is reminiscent of a lion and its character is also majestic, peaceful and totally suitable for families.

The Leonberger It is an impressive large dog with a height at the withers in males between 72 and 80 cm and in females between 65 and 75 cm.. No weight given. However, will be some 80 kg. The standard describes its appearance as:

“In accordance with its original purpose, the Leonberger it's a very big dog, strong, muscular and elegant at the same time. It is characterized by a harmonious construction and a self-assured calm with a lively temperament. Especially the male dog is powerful and powerful.”

Its coat should be medium soft to thick, broadly long, well lying. The Leo has a strong inner layer. The shapes of his physique should be recognizable. On the neck and chest, the fur, especially in males, must form a mane. The coat will be lion yellow, red, reddish brown and all the combinations between them, but always with a black mask. In favor of this lion gaze, hereditary factors related to health and longevity have been neglected.

A study published by the University of Vienna evaluated 7582 layers of Leonberger between 1932 and 2009. “It was determined that the average age of death of the Leonberger It was from 7,55 years”. During the study period, life expectancy had even decreased by 1,5 years in the last three decades. With a healthy upbringing, 10 or 12 years would be normal. The breed has recognized these red flags and is now more focused on the health and extension of life expectancy for these large dogs..

The mind of a Leonberger is pious as a lamb. Being with him is pure slowdown for man. The essence is described in the standard:

As a family dog, the Leonberger is a pleasant companion in current living conditions, that can be carried everywhere without any difficulty and is characterized by a pronounced kindness towards children. He is neither shy nor aggressive. As a companion dog it is a nice companion, obedient and fearless in all life situations.

The strength of character required includes above all: self-confidence, sovereign calm, average temperament (including game instinct), willingness to subordinate, good learning and memorizing ability and noise tolerance. The character of Leonberger impresses all dog lovers.

Once you get to know dogs better Leonberger, you will be enchanted by them forever. There is almost nothing that can disturb this giant. His very high stimulus threshold as well as his stoic composure are the necessary counterpart to his enormous strength. These two poles thus characterize the nature of the Leonberger. Here and there is a stubborn thing. Only good persuasion and supplication will help, then he will do everything for his master or lady. But as a family member he is very kind. Seeks proximity to its humans. It is a reliable protector for them. The Leonberger he is a great guy, A fascinating dog!

The Leonberger not an easy dog ​​to keep due to its size. By its nature, has very few demands. A daily walk, brushed once a week, that was all. You don't need a big garden, but a garden is already useful. He likes to take possession of it. Therefore, a small apartment on the nth floor would not be for him. Does not fit in all cars. One must consider: You're mine, the whole car will get wet. Leo can bear the heat, but it should not be challenged. Prefer the cold. The Leonberger he is a great friend and not an object for acting addicts.

It should also be borne in mind that in our current society, large dogs are often rejected. Some people just fear a giant like Leo, even if he behaves – as is normal for him – exemplary. This is one of the reasons why it is not advisable to keep it in the big city..

One must have a sufficient budget to be able to pay a lot of good food and, in case of doubt, also the vet. In addition, You should have considered before buying what to do if the dog is sick and may need to be brought 80 kg or more. Last but not least, but not less important, there are many practical things that have a profound influence on everyday life. Here one must be really responsible and look honestly in the mirror if all the conditions for a happy coexistence with the dogs are given. Leonberger. Who can claim this, is in an enviable situation of dog owner. The Leonberger worth a sin.

It must be remembered that in a Leo adult, the strap is just a symbol of control. The Leonberger has the power to control the other end of the strap. But he doesn't want. The Leonberger it's basically easy to train. Only his stubbornness has to be broken here and there with consistent smoothness. He wants to follow his lord and master and he does it very reliably. It is an elementary duty of the owner of a Leonberger to pay attention to a consistent education already in the puppy. Because only this and not the leash makes wonderful walks in nature possible, that together with this great four-legged friend become a balm for the soul of agitated people. The great dog should never be “educated” by blows or barracks methods. Because that would cause the exact opposite of education and end in disaster..

Caring for a healthy Leo is not a problem. Brushing the coat once a week is enough.

You need a lot of high quality food. A raised bowl is helpful in counteracting the risk of stomach twisting. Always pay attention to the weight.

As in most large dogs, we see hip or elbow dysplasia. Osteosarcoma, the most common bone tumor in dogs, it is also very common in the Leonberger.

Before the life expectancy of a Leonberger It was from 12 years, today is from 7 - 9 years. The pup is working to regain the possible natural life of a healthy dog. It is accompanied here by a research project of the University of Veterinary Medicine of Hannover.

Buying a Leo it should be long-term and well thought out. You should carefully check if you have all the requirements to spend many wonderful years with this giant. If you are looking for a puppy, above all, make sure that dogs are not over-bred. Ask about ancestors, their illnesses, his age reached. You should see a breeder affiliated with the FCI Leonberger. Really, a Leonberger it costs about 2.000 EUR.

If you liked, rate this entry.
5/5 (1 Review)
Share with your friends !!
TwitterFacebook2Pinterest
2
SHARES