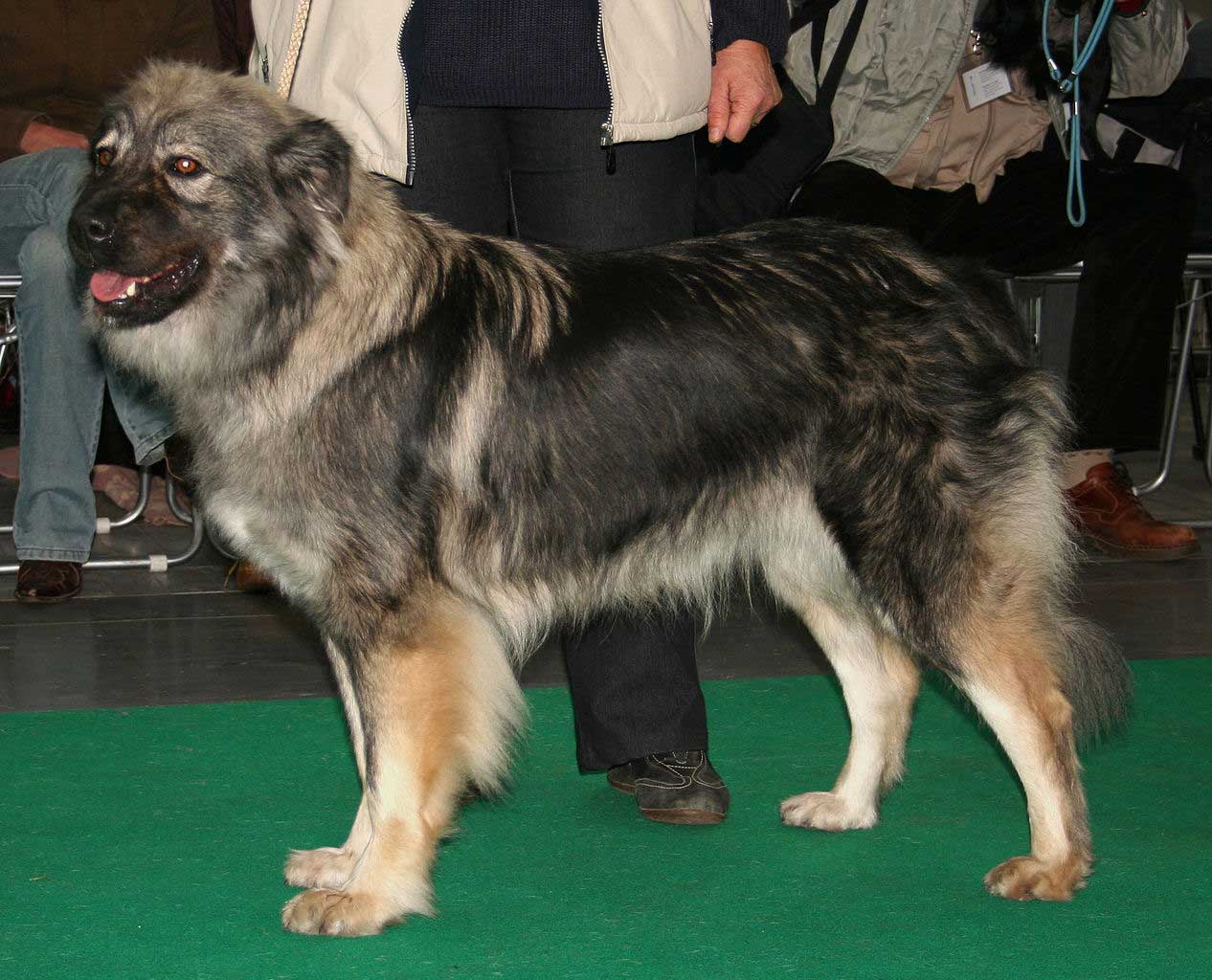 The Karst Shepherd a typical guard dog. Acts largely independently, which is also essential for the protection of the herd.

The Karst Shepherd It is a breed that has existed for several centuries and belongs to the group of molosoids. Probably, This dog followed the Illyrian tribe in their migration through Styria and the Dalmatian islands and settled in the Slovenian region of the Karst Massif.. The first time that race is referred to in writing is in 1689, en el libro del Barón Janez Vajkart Valvasor titulado « La gloria del ducado de Carniole ». The breed and its standard were officially recognized on 2 in June of 1939 con el nombre de « Iliria Shepherd » durante la asamblea general de la F.C.I. in stockholm. During the F.C.I general assembly. in Bled-Slovenia in 1948, the standard was completed and the breed recognized again. However, to 16 in March of 1968, the Iliria Shepherd from the Karst massif, bore the same name as the Shepherd of the Sarplanina massif. In front of two shepherd dogs with the same name, la Sociedad Central Yugoslava decidió nombrar al de la región de Karst « Pastor del macizo de Karst » y al otro « Sarplaninac ». Since then, these two races are totally independent.

The head is big, with powerful teeth. The eyes are almendrados, brown or almost black. The ears are inserted moderately high and fall flat in the form of “V”. The tail, wide at the base, takes the form of a saber, drawing a light hook with the tip should reach the hock.
Fur: quite long, reaches the 14 cm.; the undercoat is well developed.

The Karst Shepherd es un típico perro guardián. Acts largely independently, which is also essential for the protection of the herd. It is very territorial, brave and vigilant, but without biting. He is distrustful and even hostile to strangers, but a loyal and devoted companion of his master and his family.

The born Guardian needs early and careful socialization and loving but consistent education. He only submits to clear leadership.
Like all guard dogs, the Karst Shepherd es de desarrollo tardío, reaches mental maturity only at 3-4 years.

He loves country life and being outdoors. Its ideal habitat is a house with a large parcel of land that it can monitor. With a close family relationship and a task that fits your natural waking instinct. The Karst Shepherd es un perro de compañía agradable, kind and also obedient, but he will never completely detach himself from his strong independence.

Only conditionally suitable for the city.
Outside the mountainous regions of Slovenia, these dogs are very rarely found. This is because, on the one hand, to his great need to move and, on the other hand, to the high demands of their education. The Karst Shepherd are more individual than other sheepdog breeds, since they are often left to their own devices in their “natural habitat” and protect herds independently. An experienced owner with a lot of patience and a sense of mind for your dog will have little trouble educating his Karst Shepherd towards an obedient and calm companion.

The Karst Shepherd it's quite healthy for a sheepdog, pero sufre de algunos problemas típicos de la raza. On average, they reach an age of 10 a 12 años y por lo tanto se vuelven significativamente mayores que la mayoría de los German shepherds. The Karst Shepherd, living in a family environment, they are less susceptible to disease than animals that have to sleep in kennels and are permanently exposed to the weather. Boredom is also a stressor and affects the mind and health of dogs..

Several breeders of the Karst Shepherd they are members of the Dog Club of Southern and Eastern Europe.
Some Slovenian breeders offer their dogs for export.
¡Presten atención a las buenas condiciones de cría!
Like the Karst Shepherd they are very rare outside of Slovenia, difícilmente podrá visitar al criador antes de comprar. If you have the possibility, Combine buying a puppy with a multi-week vacation in Slovenia. If your puppy already knows you, you will feel much less stress during the transfer and during the first adaptation phase. You can also check the conservation conditions during a visit to the breeder.

Coexistence is important that you have with your new friend. Before considering the acquisition of a dog of the breed "Karst Shepherd" you know certain factors. Not all breeds of dogs are apt to live in an apartment, you must take into account his character, their need for exercise, their interaction with other pets, their care and if you have small children, their level of tolerance towards them.

If you liked, rate this entry.
5/5 (1 Review)
Share with your friends !!
Twitter9Facebook2Pinterest
11
SHARES