The Brazilian Tracker it's a Scent hound. The breed is also known under the names Urrador (his voice) or Urrador American.

It was developed in the Decade of 1950 by Oswaldo Aranha Filho (In janeiro river), to hunt peccaries (they are pigs of medium-sized and wild that found in all Central and South America), Jaguars, and other types of dams typical of the country.

Aranha Filho combined a number of breeds of hunting from America and Europe along with some native dogs of Brazil to create your dog. The Brazilian Tracker became Brazil's first race and it was what earned it the recognition of international dog associations.

The glory of being a breed officially recognized at the international level lasted barely six years, time in which by neglect and a series of relief, the race was decimated.

At that time there was only one breeder of Brazilian Tracker, Mr Oswaldo Aranha Filho, the creator of the race... And, their copies suffered because of two events, first of all an outbreak of babesiosis. Babesiosis (or babesiosis) It is a parasitic disease similar to malaria caused by protozoa of the genus Babesia and usually affect pets, especially to dogs. Its name was established in honor of the Romanian biologist Victor Babeş, He was the first to isolate the pathogen. It is the typical disease that is transmitted through a vector organism, usually the tick (Ixodes dammini); in fact, This mite is the same that transmit Lyme disease and, often, both are associated with.

Y, in the second place, many of the dogs suffered poisoning from excess pesticide used by an employee of the farm.

It was exactly in the year 1973, when the Fédération Cynologique Internationale declared the dog breed Brazilian Tracker, officially extinct. Which led to him losing his classification number since, prompted the cancellation of the registration.

Since the FCI and the Brazilian Confederation of Cynophilia They declared this extinct breed, have carried out various efforts and programs of to retrieve it.

The standard of the breed of 1970 declaring a size between 62 and 67 cm and very similar in appearance to the Black and tan coonhound. 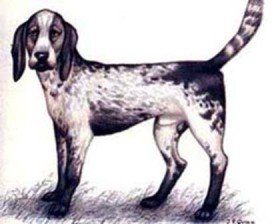 There have been attempts underway to recreate the race from a mixture of American Foxhound, Black and tan coonhound, and the Small Blue Gascony, English Foxhound, and Bluetick Coonhound.

The Grupo de Apoio Ao Resgate No Brazilian Tracker of Brazil, a club dedicated to the restoration of the breed, Brazil, He devoted himself to organize - aim- a list of forty breeding animals of the correct type as, puediesen be certified as members of the race, in order to restore the race and return to be recognised by the Kennel Club of Brazil.

The re-establishment of the breed, It has not been an easy task, due to the existence of very few pure specimens, and above all by the lack of social interest, There are very few people interested in the recovery of the true Brazilian cultural heritage and the genetics of the breed.

At the moment, the character is not easy to illustrate or define. Efforts to restore the breed continue today., and are being used in breeding programs, breeds used in his development with the descendants of mixed races found in all Brazil.

However, the race again in the various canine clubs list (small) and dog organizations in North America, for the promotion of a rare species for those seeking an unusual pet.

As it's a race in the process of being rebuilt, no data on specific diseases or extraordinary health demands.

The Brazilian Tracker is a hunting dog, not a type of dog that has traditionally been used as a pet.

The copies that exist today, fruit of the reconstruction, they tend to be very independent animals and, sometimes, somewhat stubborn, with a strong instinct of prey that, leads him to chase the small animals that live in the house... But with proper socialization, any dog is a good dog.