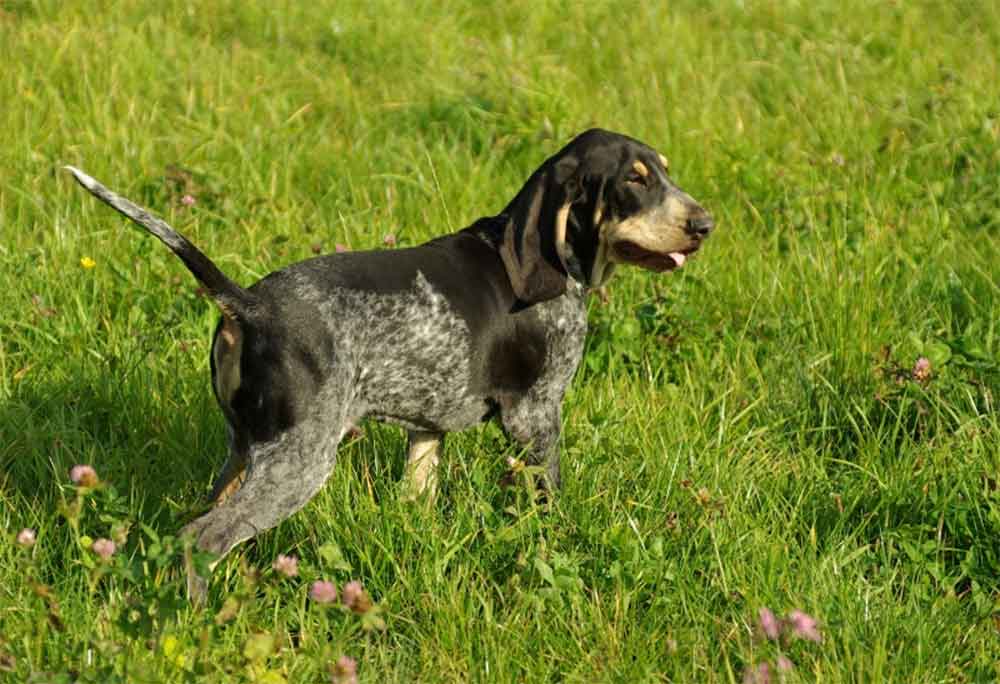 The Small Blue Gascony, in general, they are considered docile and very attached to their master, very friendly with children and sociable with other dogs.

The Small Blue Gascony is a short legged version of the Great Gascony Blue, his ancestor. However, although the history of the latter extends deep into the history of all of Europe and even the United States, its history has remained closely linked to its country of origin, France.

Its appearance dates back to the end of the Middle Ages, and more precisely to the sixteenth century. The development of the breed is not the result of crossing the Great Gascony Blue with smaller dogs, but simply from a true selective breeding program that consists of selecting and breeding the smallest individuals, generation after generation. Although they were very efficient in hunting wild boar and large game in packs, the Great Blue was nevertheless a heavy hound, and was not entirely satisfactory in tracking small game in the high forests.

The Small Blue Gascony was therefore developed for the specific purpose of hunting rabbits, hares and other small game animals. Faster than its predecessor, inherited its tracking and exploration skills from its predecessor. Its use spread in France beyond its region of origin, Gascuña (in the southwest of the country). Unlike many dog ​​breeds that were decimated during these periods, did not suffer much with the French Revolution and the two World Wars. Thanks to his skill in hunting rabbits, has been able to get through these clashes in French history without too many losses, and remain present in relatively constant numbers despite events.

However, despite this resistance and its renowned performance in hunting small game, very little was exported, unlike his older brother, that set foot in the United States as early as the 18th century. This is mainly due to the fact that Small Blue, raised in herds, it was much less profitable to hunt than the Great Blue, that it was able to attack larger prey and thus provide more food. However, in France, despite this disadvantage, became progressively more popular than with hunters and families.

However, gained visibility on the international scene in 1963, cuando the International Cynological Federation (FCI) officially recognized the breed. El American United Kennel Club (UKC) did the same in 1991. However, he still has a long way to go in this respect, as they have not been emulated by many other major organizations. For example, so far, nor the other great American organization, the American Kennel Club (AKC), nor his neighbor the Canadian Kennel Club (CCC), nor the prestigious British Kennel Club, they have taken the step.

In fact, the Small Blue Gascony is still today mainly present in its country of origin. It has even become more and more popular there in recent decades.. This was particularly surprising in the 1990s. 1980, when it happened 50 annual entries in the Livre des Origines Français (LOF) in the early years of the decade to more than 200 at the end, that is to say, quadrupled. The trend increased in the early 1990s 1990, and the number stabilized at around 450 per year from 1993. There is a new rise at the dawn of the 21st century, when the 550 registrations per year. From 2006 there is a steep decline, so that by the end of 2010 there are only a few 350 births per year. However, this is still more than four times the number that its predecessor, the Great Gascony Blue, can boast.

The Small Blue Gascony has an appearance very close to that of his ancestor, the Great Gascony Blue, and even its size is not so far from the latter, whatever his name is. In fact, with a height of 50 to 58 cm to the cross, is actually a medium-sized dog. The term “small” is more suitable to describe the size of the fighter for which it was designed.

The Small Blue Gascony has a noble and proud appearance and a rather gentle general expression. His body is well supported by his back, no excess length, with a slightly sloping croup and a long, open chest that falls to elbow height. Its front legs are powerful and its shoulders are muscular. In general, has a balanced musculature and bone structure, without excess. Its tail is thin and carried like a saber blade.

Head is slightly domed when viewed from the front, and the forehead is full. The stop (distance between the two eyes) it is little accentuated. The eyes are brown. The nose is very black and wide, and the nostrils are wide open. The whisker pads are not very thick and quite long: the upper lip falls back covering the lower lip. The snout (upper part of muzzle) is the same length as the skull; is strong and slightly arched, which contributes to giving it a noble look. The ears are moderately thin, dangling and curly. Very long, can reach the end of your nose, or even lower.

The skin of the Small Blue Gascony it is flexible, black or very mottled with black spots, and in any case never completely white. Their mucous membranes are also black. Its pelage is short, semi-thick and well furnished. Its fur is completely mottled, black and white, with a slate bluish glow, hence its name.

It also, may have more or less numerous and more or less large blackheads. For example, at head level, usually has two black dots that are not on the top of the skull but that surround its eyes and cover its ears. At the top of the skull there is a white spot with a small oval black dot, typical of the breed. The upper part of the eyebrows are marked with more or less bright tan spots. Traces of tan are also found on the cheeks, the chops, inside the ears and sometimes on the legs and under the tail.

Last, sexual dimorphism is not very pronounced in this breed: males and females are generally very similar in size and dimensions.

The Small Blue Gascony he is a dog with a pleasant character, calm and affectionate. He is a very good companion dog., but it requires a lot of physical exercise and wide open spaces. Your ideal space is a house with land. It is necessary to take them out for a daily walk outside of hunting season. Dogs are generally very attached to their master. They are also kind to children and sociable with other animals. (dogs, cats…).

It is a hunting dog that runs well, very diligent in his hunting style, ideal for running after hare. It also shows good qualities for hunting big game, for example wild boar hunting. Finally, the Small Blue Gascony has a magnificent voice and a fine sense of smell.

Hygiene and health of the “Small Blue Gascony”

The Small Blue Gascony often lives outdoors and requires only rudimentary grooming. If you live in the house, weekly brushing is recommended. It can also be useful to bathe him when he returns from hunting…

When you come back from hunting or walking, inspect his feet and ears Small Blue Gascony looking for thorns (herbs that get into the skin causing pain and infections). Your floppy ears may be prone to ear infections. It is advised to examine and wash them once a week.

The Small Blue Gascony he is a robust dog. You may suffer from otitis. Itching or a bad smell should alert you. The Small Blue Gascony you can also be injured while hunting. A fracture immediately leads to a loss of pressure in the affected limb. Skin tears may be more inconspicuous in the coat. Inspect his wound carefully when you return from the hunt..

The dog's diet will depend on both its breed and weight and its lifestyle. The one with Small Blue Gascony must consider, among other things, your activity.

How much cost a “Small Blue Gascony”

The price of a puppy Small Blue Gascony often haunt them 650 EUR, but it can reach the 1000 euros for the best subjects.

As in any other race, the price charged depends on the prestige of the kennel, of the lineage from which the dog descends and its intrinsic characteristics and, in particular, of its conformity with the standard. This explains why there may be price differences between puppies from the same litter.

In any case, the Small Blue Gascony hard to find outside France, and this is particularly true in North America, despite its recognition by the American UKC. In the case of an import from France, transportation and administrative costs are added to the purchase price. It also, it is necessary, of course, respect the regulations regarding the importation of a dog from abroad.